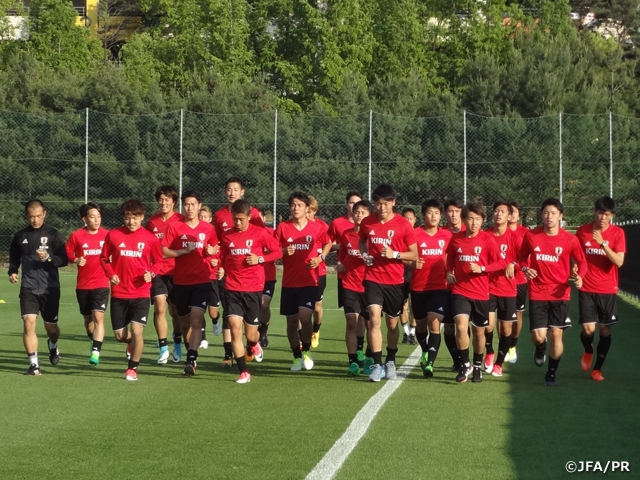 After a preparation camp in Shizuoka, U-20 Japan National Team arrived in Korea, where the FIFA U-20 World Cup will be held.

The team departed from Japan in the early morning and arrived in Seoul few hours later. In the training session which started from 5 p.m., they went through running and stretching, followed by passing drills. One of the goal scorers from set piece in the friendly match against Honduras, ITAKURA Kou, commented, ‘We finally arrived in Korea. I should brace myself for the coming tournament. I understand that the opening match against South Africa will be important. If we win this match, we will gain momentum for the subsequent games. Thus, we will focus on this match first and make the best preparation possible in training.

Before heading to their camp site in Suwon, the team visited the Japanese School in Seoul, and over 400 children from local pre-school, grade school and junior-high school came to cheer for the team. After introducing themselves to the students, some of the squad members demonstrated their skills and played football together. Forward KUBO Takefusa displayed his brilliant technique with kick-ups, followed by a penalty shootout game where goalkeeper HATANO Go and forward OGAWA Koki joined and entertained the young kids with wonderful skills, and received many cheers. To wrap up the exchange event, the squad had a small-sided game with the junior-high students.

After receiving the national flag with many encouraging messages, captain SAKAI Daisuke expressed his appreciation, saying ‘We will do our best to attain a good result’. In this exchange with smiles from the beginning to the end, the team were re-energised spending a wonderful time with the children.

With only three more days before the curtain-up of the tournament, other national teams of the same group, Italy, Uruguay and South Africa, arrived in Suwon by this date to make their final preparation for the World Cup opener.

UCHIYAMA Atsushi, Coach
We will start our regular training from tomorrow and work on the physical conditioning of my players, at the same time setting the right mind-set entering the tournament. After the Honduras match including where we conceded the goals, I will discuss with my players where they need to use their ‘brains’ and think differently. We will compete with patience and persistence.

MF ＃8 MIYOSHI Koji (Kawasaki Frontale)
We finally arrived in Korea. We still have few days until the tournament opener, but we need to get ourselves mentally ready while feeling relaxed and being united as a team. Expectations are high, and I hope many people support us by watching and cheering our games from Japan, since there is no time difference from where we stay. The most important thing for us is to display what we have been working on. By understanding the characteristics and strengths of our opponents, we will make the necessary adjustments and prepare for the coming games.