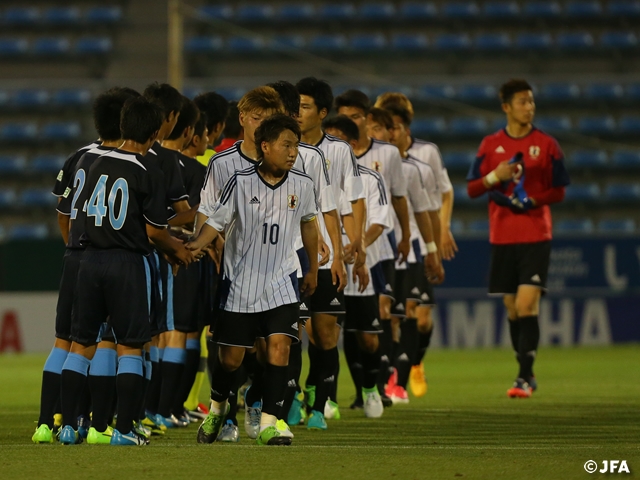 On Friday 12 May, U-20 Japan National Team edged Jubilo Iwata 1-0 in a training match, after holding a morning practice where they went through build-up plays, set pieces and penalty shooting drills.

The late-afternoon match with a pair of 30-minute games started from 17:30 and attracted 1100 spectators. Some early chances were created by the national squad as MIYOSHI Koji, after receiving a long pass from TOMIYASU Takehiro, sent in a cross towards OGAWA Koki who was unable to connect with a header to direct the ball into the net in the 5th minute and ENDO Keita combined with KUBO Takefusa to surge up the pitch, but failed to get past the defender near the goal in 15th minute. Then, the Japanese side finally capitalised on the chance after 24 minutes to open the scoring. ICHIMARU Mizuki deliverd a cross towards Kubo, who deceptively faked receiving it and found ITO Hiroki in space to fire a shot at goal. Although the initial attempt was unsuccessful, Ogawa reacted quickest to the loose ball to slot in an opener. 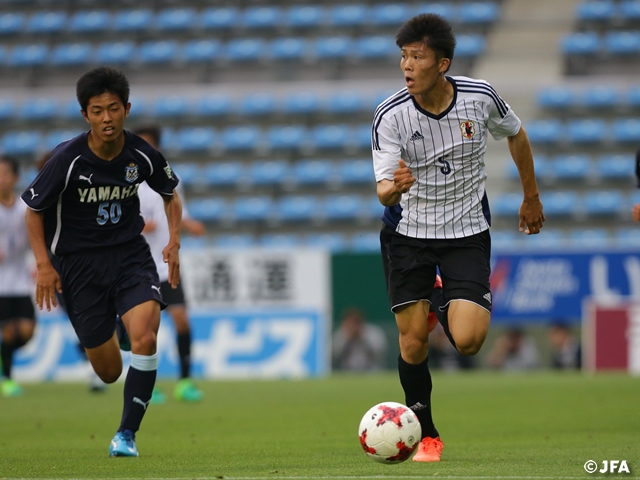 In the second game, the Japanese squad replaced all the members except Ichimaru. Some threatening moments came in the opening minute with Iwata hitting the bar and in the 3rd minute when goalkeeper HATANO Go made a fine save to deny their opponents from scoring. Then, in the 38th minute, U-20 Japan came close to Jubilo’s goal, after intercepting a ball in the middle, where FUNAKI Kakeru sent it swiftly towards IWASAKI Yuto, who in turn found TAGAWA Kyosuke behind the backline to fire a shot, but his attempt went wide to the right. Thereafter, HARA Teruki combined with SAKAI Daisuke to exchange a series of passes in midfield, but they were unable to create effective scoring chances for the Japanese side to double the lead. After a goalless draw in the second part of the match, the final scoreline favoured the national team in a 1-0 win.

After the match, coach UCHIYAMA Atsushi commented, “The primary objective of this training match was check on the condition of my players. Even though there are individual differences, we will take the necessary steps to raise the condition to prime form before the coming tournament.” Ichimaru who played throughout the entire training match stated, “We need to improve on the quality of passes and lessen the numbers of time we give away the ball. We cannot initiate effective attacks if we lose possession in midfield in addition to allowing the opponents to create their scoring chances. We need to work on them.” Endo also added, “We allowed the opponents to create several scoring chances, while the only real chance I orchestrated was the moment when we scored the goal. We need to increase more attacking schemes to our play.”

Meanwhile, MORISHIMA Tsukasa, who has been practising with the team until yesterday, had to leave the squad due to right ankle injury suffered prior to the camp. TAKAGI Akito was called up from the reserve squad and arrived in Shizuoka in the evening. Coach Uchiyama explained this member change by stating, “Takagi has been with the team since the first round of qualifiers and understands our team concept,“ and added, “He is very composed despite the unexpected circumstance.” 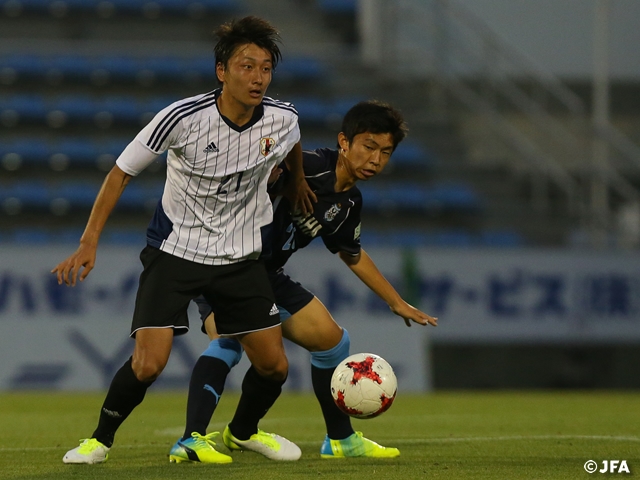 FW #9 OGAWA Koki（Jubilo Iwata）
My strength is the ability to create chances upfront by constantly moving and finding areas to exploit in the attacking third of the pitch. I believe the scoring came in from such movement. However, I also think that I should have created few more chances by getting effectively involved in attacking plays in the frontline. Furthermore, I had few occasions where I lost possession of the ball. Prior to the coming tournament, I am looking to get myself to top form and contribute to the team by becoming a focal point of attacking plays.

DF #5 TOMIYASU Takehiro(Avispa Fukuoka)
In the training match, we hoped to see more effective vertical passes to carve open the opposing defence. In order to do so, we need to raise the passing speed at the same time string passes at much higher tempo. In defence, it would be ideal to keep the opponents from facing our goal in key areas, but even when they do face our goal, we have discussed that we should never be hurried and composedly defend by containing their attacking players. Defenders are the backbone of the team, and if we are not fully focused, then the entire team will be out of focus. I am constantly seeking to play composedly to support my team.

GK #21 YAMAGUCHI Louis Takaji Julien (FC Lorient/France)
I returned to Japan few days prior to the camp to adjust to the time difference. I believe I am communicating well with my teammates. U-20 FIFA World Cup gives us an excellent opportunity to show how well Japan can perform in world stages to different people around the globe.