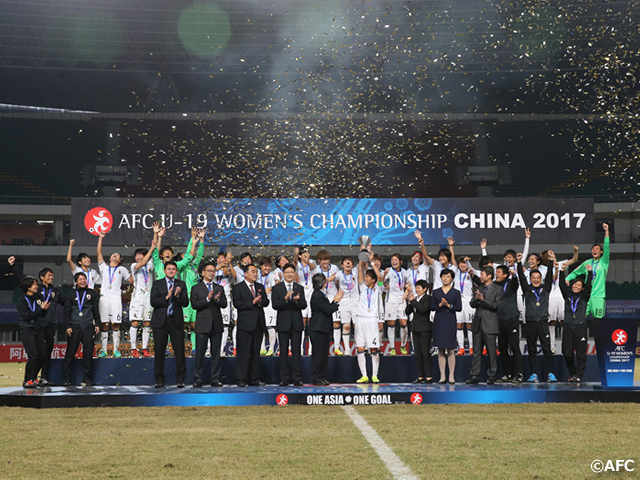 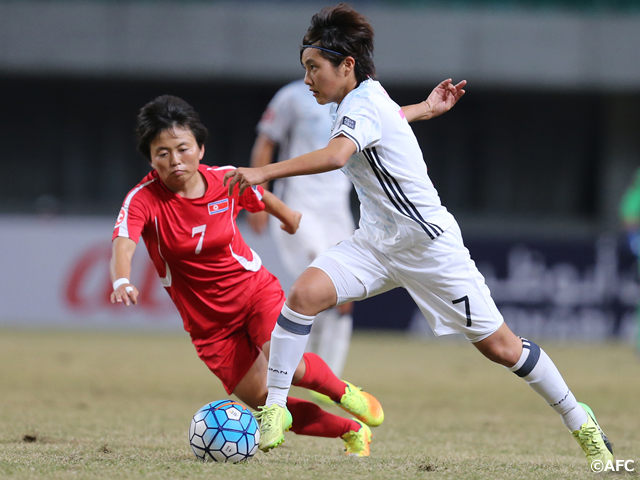 U-19 Japan Women’s National Team faced DPR Korea in the final of the AFC U-19 Women’s Championship China 2017 on Saturday 28 October at Jiangning Sports Centre Stadium.

It was the same final fixture as the previous tournament in 2015, and the game stayed in the balance and neither side were able to take the early initiative. In this highly-contested match, U-19 Japan were able to fashion only few promising chances in the first half. In the 25th minute, midfielder HAYASHI Honoka regained possession of the ball in midfield and surged up the pitch to attempt a shot at goal, but failed to hit the target. On 42 minutes, after an exchange of pass with midfielder NAGANO Fuka, midfielder MIYAGAWA Asato found forward UEKI Riko, who collected the ball and dribbled up to the front of the DPR Korea’s goal, but her effort was parried away from danger by the opposing goalkeeper. The match was scoreless at halftime.

Before sending his players back to the pitch, Japanese coach IKEDA Futoshi encouraged them, ‘Let’s enter the second half with confidence.’ Then, the young Japanese internationals responded just five minutes into the second half. Forward Ueki reclaimed the loose ball from a corner in the 50th minute and fired in a stunning goal to give her side an important opening goal of the match. 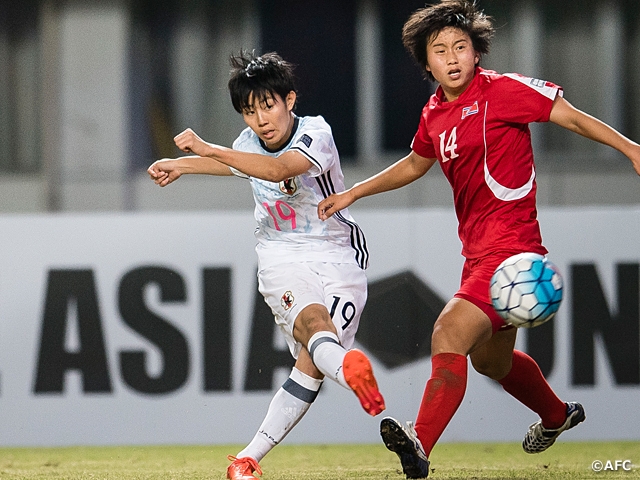 Japan menacing attacks continued in the 64th minute, when Hayashi was played through by Nagano, but her shot struck the crossbar. Towards the end of the game, DPR Korea fiercely threatened the Japanese goal from repeatedly earning a corner, but the young Nadeshiko defence led by goalkeeper SUZUKI Aguri was resilient and did not allow the opponents to level the match. U-19 Japan edged their Asian rivals 1-0 and became the crowned champions of Asia for the fifth time.

With the tournament serving also as the qualifiers, where the top three teams would qualify for the FIFA U-20 Women’s World Cup France 2018. Japan have already clinched a place in the world competition by winning the semi-final on 25 October. Adding another to their achievement list, the Japanese team were given the Fair Play Award for the tournament.

IKEDA Futoshi, Coach (U-19 Japan Women’s National Team)
I am proud of my players who fought hard and edged a tough final to win the championship. We defended tenaciously as a united team when the opponents threatened us, and displayed our strength, the ability to work hard during tough stretches, both in offence and defence in today’s match. We will be now looking to further strengthen the team for the World Cup next August as well.