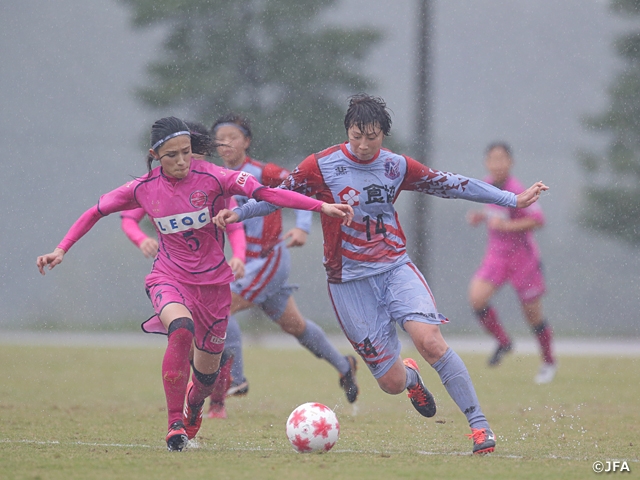 The remaining eight first-round matches of the 39th Empress's Cup All Japan Women's Football Tournament were held on Sunday 29 October and all the teams that advanced to the second round which will take place from Friday 3 to Sunday 5 November were decided.

Due to the rain which had started before the kicked off, there was a large puddle in the centre of the pitch. Despite playing under these difficult conditions, Norddea made a good effort and created the first scoring chance of the game. In the 8th minute, YAMAZAKI Yuna surged up the right flank and crossed the ball to the front of the goal. Two teammates reacted to the cross, but could not make contact with the ball and score an early goal.

After 40 minutes, the rain began to fall harder and both teams struggled to build up good attacking plays. However, Ange Violet, who exploited the open space by sending effective long balls on the other end of the pitch, started to take control of the match. 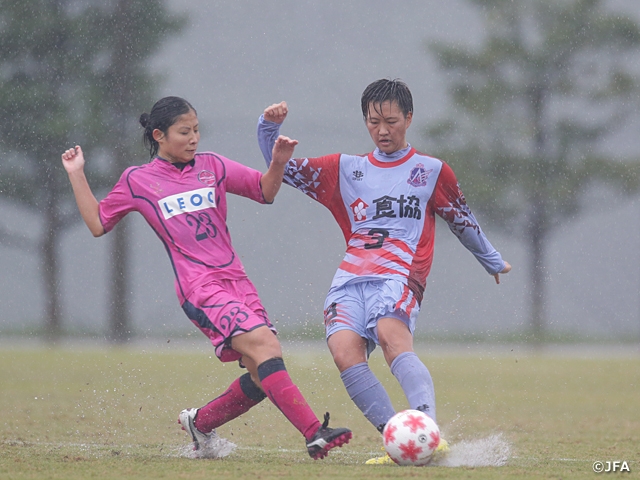 Ange Violet, then, earned and capitalised on a left corner in the 67th minute. KOMATSU Mina took the corner and, even though it was once punched away by goalkeeper MURAKAMI Rumika, KONDO Asuka got to loose ball first and sent in a one-touch cross to the front of the goal, where ADACHI Eriko directed into the Norddea’s net with a back header to give the Hiroshima club a much-awaited opener.

Against Norddea who came back and attacked fiercely to level the match by committing more players forward, Ange Violet stayed composed and looked for their chanced to extend the lead off counter-attacks. Then in the 80th minute, after reclaiming the ball on their own end, NAKAJIMA Mari sent a long pass to Adachi, who controlled it brilliantly and got past the surrounding defenders with excellent individual effort to fire her second into the net from long range and give her side the two-goal cushion.

The second match between Shizuoka Sangyo University Iwata Bonita and Waseda University at Fujieda Sogo Sports Park Athletic Field saw a surprising start to the game with Waseda’s MATSUBARA Arisa directly firing a kick-off ball at goal. Fortunately, the puddles that affected the first game disappeared by the time the second match started, and both teams connected better passes to create scoring chances.

In the 17th minute, Bonita scored the first goal of the match from a brilliant combination play. FUJIWARA Kana didn’t miss a chance to steal a weak pass in the Waseda’s half and found KANEFUDA Anzu, who quikcly sent a one-touch pass down the right side. SHIROSHITA Chinatsu collected the ball and crossed it to the centre where HIRANO Asami headed into the net to open the scoring for her side.

Waseda, on the other hand, got gradually settled into the game and started to attack with better pace. In the 25th minute, KAWANO Juri collected a long pass from right-back OKUGAWA Chisa and assisted NAKAMURA Mizuki in scoring an equaliser to level the match one apiece. Gaining momentum after the goal, it was not long before Waseda managed to net the second and take the lead for the first time in the game. Okugawa responded to the loose ball after a Bonita’s clearance and sent it directly back to the front of the opponents’ goal. Then, MURAKAMI Maho struck it brilliantly with his right foot and scored a go-ahead goal only three minutes after Waseda netted their first. 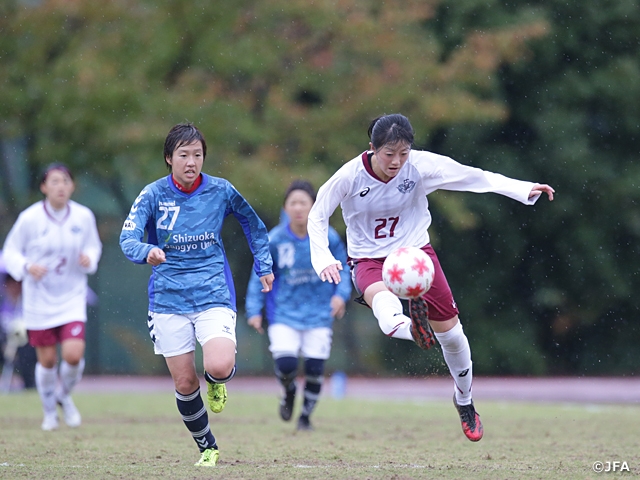 After 50 minutes, the strong wind started to affect Bonita adversely, as they had a difficult time sending long balls to their forward players and create effective attacking plays. Waseda took the game out of the reach of the Shizuoka club with a game deciding goal in the 84th minute. From a short corner, ABE Yukiko’s attempted a left-footed shot and the deflection was tapped in by substitute YANAGISAWA Saki, before the match ended with Waseda securing a 3-1 win over Bonita and getting through the first-round competition for third consecutive year.

NAKAMURA Hiroki, Coach (Norddea Hokkaido)
We have only few players who can send effective long passes, and I expected today’s match to be difficult under this type of weather. We had stretches where we pressured Ange Violet, but could not score and ended up conceding one from a counter-attack. Our players did very well and I’m sure that it was a good experience for them as well. I felt also that we need to improve our long game. We will capitalise on this experience and work hard for the next competition.

ADACHI Eriko（ANGE VIOLET HIROSHIMA）
We had long stretches where we were intensively battling for the ball especially in the early part of the game. After the rain had weakened, the pitch condition improved slightly and we took advantage of the situation and scored a goal. When I scored the second, I struck it with force seeing the open net. It was a physical tough match, but our defenders protected the goal with tenacity and I believe we won it as a team. From now on, we are going to play the teams from higher divisions and must stay competitive and do whatever it takes to give us a win in the proceeding rounds.

MURAMATSU Daisuke, Coach (SHIZUOKA SANGYO UNIVERSITY IWATA BONITA)
After achieving our goal to get promoted to the Nadeshiko League (Division 2), we might have been too complacent and did not play well in the first half today. The problem was that we were affected adversely by the poor weather and could not keep the level of play. We had a chance of facing Ehime FC Ladies in the second round and I wanted to see how well we can compete against a Nadeshiko Division2 team. Furthermore, if we could manage to advance further, we might have had a chance to meet Division1 powerhouse INAC KOBE LEONESSA. Honestly speaking, I wanted our team to stay in the competition and face these teams. We will consider this experience as a lesson learnt and get ready well for the next season.

MATSUBARA Arisa (Waseda University)
The pitch condition was poor and we simply could not move the ball well. Under these difficult conditions, we entered the match with a mutual understanding that we need to ‘play the long game’. Conceding an opening goal is one of the areas that we need to improve, but, fortunately for us, it happened in the early part of the match. We had a strong belief that we could equalise as well. In fact, we levelled the match and turned the game around in the first half. We will play against Ehime FC Ladies in the second match. If we keep our level of play, then I believe we have a chance of having a good contest. We will be entering the match as challengers, and hope that we can gear up for the game in one week’s time.