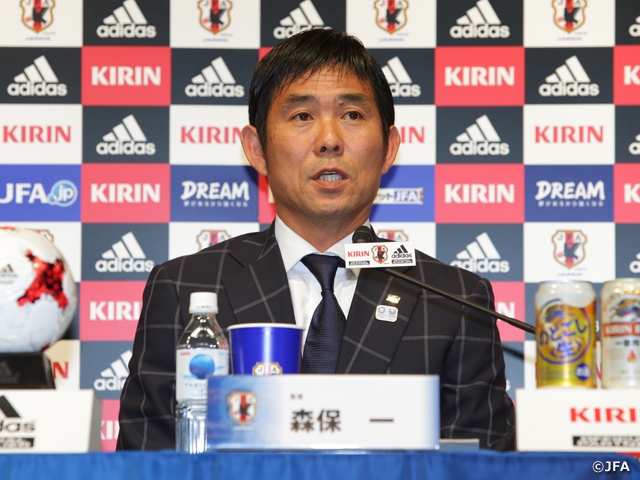 MORIYASU Hajime, who had just taken the coaching position of the Japanese squad for the 32nd Olympic Games to be held in Tokyo in 2020, spoke at the press conference held at JFA House in Tokyo on Monday 30 October. “It’s a huge responsibility, but I will do my job with all my might to win a medal.”

As the first-year coach of Sanfrecce Hiroshima, Moriyasu led the team to the J.League Champions in 2012, followed by two more such crowns in 2013 and 2015. By the time he resigned in July this year, he won the league three times in four years as well as finished at third place at the FIFA Club World Cup in 2015. His career record as a coach at the J1 level is 92 wins, 55 losses and 40 draws.

The goal he newly put up as the coach of the Olympic team is to win the country’s first Olympic medal in football since the Mexico City 1968 Olympic Games of 52 years ago.

Coach Moriyasu stated, “It is a huge responsibility to coach the team in the Olympics held in the home country, and good results are highly expected. But I will do my job with all my might to win a medal and attain the results that can make our people happy.”

As for the playing style, he envisions “collective football both offensively and defensively by taking advantage of the strength of Japanese players.”

Men’s football in the Olympics are competed mostly by the players of 23 years old and younger, which is the generation directly connected to the top national team. From the players on the Rio de Janeiro Olympics squad in 2016, midfielder IDEGUCHI Yosuke (Gamba Osaka) and forward ASANO Takuma (VfB Stuttgart), who used to be coached by Moriyasu himself at Hiroshima, are currently playing for the top squad of Japan National Team.

As a player, Moriyasu played in Hiroshima even before the J.League started. Back then the team in Hiroshima was called Mazda, belonging to the Japan Football League (JFL). He was selected onto the national team by coach Hans OOFT and established his presence as a defensive midfielder. In his career, he played in the total 35 international A matches including the FIFA World Cup Asian Final Qualifiers in1994.

“Regardless of their past record, I want all the players who want to play in the Olympics to keep working hard with their dream on their mind. I want to take a look at as many different players as possible and help them get better individually as well as making them better footballers,” added Moriyasu.

Born in Nagasaki Prefecture, Moriyasu, 49, retired from playing as a professional when he was 34, and started his coaching career as a development coach for his old club of Hiroshima. In 2005, he joined the JFA National Coaching Staff and later coached the national U-19 squad for the AFC Youth Championship in 2006 and the U-20 for the FIFA U-20 World Cup Canada 2007. Then he also served as a JFA National Training Centre Coach for China.

JFA Technical Director NISHINO Akira said “Coach Moriyasu has a rich experience of coaching young players, and with that experience he also achieved great deal success at J.League. We would like such a coach with that level of experience to help many players flourish and to improve the team.” 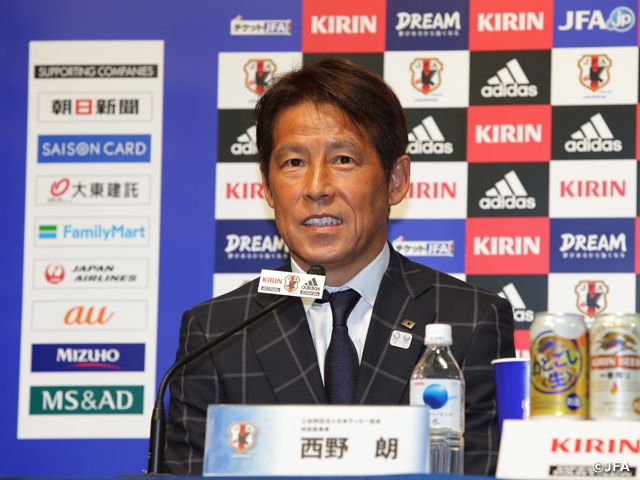 Nishino himself coached Japan’s Olympics team in the Atlanta Olympics in 1996 and helped his squad advanced out of the group stage for the first time in 28 years after memorably defeating Brazil. “There should be some things that don’t go smoothly after making the jump from a club coach to a national team coach. Despite the pressure, I want him to stay focused and maintain his style. Also, I want him to feel free to come to us and make any requests.”

JFA President TASHIMA Kohzo, who also sat in the press conference, said “Surely this job will give him pressure. But Coach Moriyasu is an honest man who never gives up a job until it is completed. I believe he is the right person for the position of our Olympic squad’s coach. We will help him achieve the best possible result.”

Moriyasu’s contract lasts until the end of the 2020 Tokyo Olympics. The first official competition for him is expected to be an international tournament to be held in Thailand in December, followed by the AFC U-23 Championship in China in January next year. Director Nishino led the selection of the coach, and the decision was approved at the JFA Executive Committee Meeting held on Thursday 12 October.

Coach of Nadeshiko Japan TAKAKURA Asako, who happened to be at the JFA office on the day, is expected to lead the women’s team in the Tokyo Olympics. She welcomed the addition of Moriyasu and sent the message of encouragement, saying “We are of the same age and worked together at the Training Centre. I am happy that he was given the position. We are going to work hard for our respective national teams.” 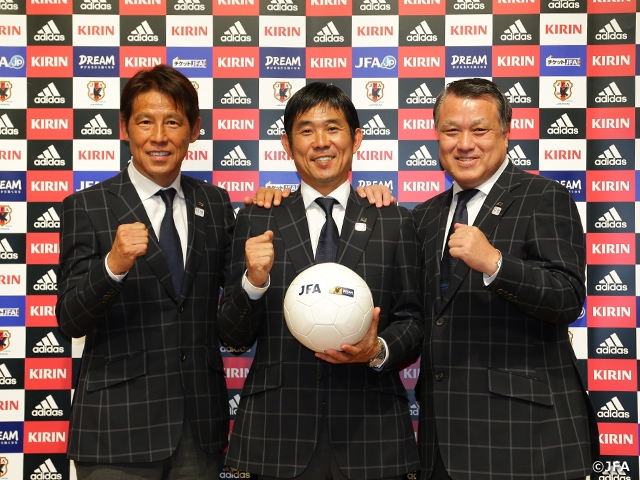 MORIYASU Hajime, Coach of Men’s Olympics Team
I would like to flexibly determine the playing style of the team as I watch our players. What I have done in Hiroshima will be the basis for the team, and we will play with the best suited style for us. As we help our players get better individually, we would like to play collective football offensively and defensively by taking advantage of the strength of Japanese players. We don’t have qualifiers for the Tokyo Olympics, but we regard the fact of not having matches to play as a plus and take enough time to build the team. We will figure out what we are missing to go to the next level at the world stage. I think the keys are to get a lot of ideas through discussions with Director Nishino and other coaches and utilise those ideas in our practice and go through training matches with passion.

The players who will play with us have been trained by different coaches. I hope those players will further gain good experience and show those efforts given by their past coaches and flourish in the national team. As we aim at the results that can make our people happy, we will do our job and help the players get better. This is the generation just under the top national team. So, I would like to help the players go to the next level and be good enough to play in the World Cup in 2022. I was born in Nagasaki and lived in Hiroshima for many years. Those are the only two cities in the world where a nuclear weapon was dropped. Now they have become the cities representing world peace. The Olympics has another role in this world to promote world peace, so I hope I can send out the similar message doing this job.

TASHIMA Kohzo, President of the Japan Football Association
When our Technical Director Nishino told me that Coach Moriyasu will be leading our Olympic squad, it was refreshing and made me glad as well. Tokyo Olympics in 2020 is a very important event that attracts a large amount of attention. Surely this job will give him pressure. But Coach Moriyasu is an honest man who never gives up a job until it is completed. I believe he is the right person for the position of our Olympic squad’s coach. We will help him achieve the best possible result.

NISHINO Akira, Technical Director of JFA Technical Committee
Coach Moriyasu has a rich experience of coaching young players, and with that experience he achieved great success at J.League as well. We would like such a coach with that level of experience to help many players flourish and to improve the team. We need to look at not just the Olympics but also the years after that. We have a high expectation that this team will achieve our goal and win the thing that shines on their chest in the end. Our association will make sure to support them and help our men’s and women’s football teams achieve success at the Olympic Games.