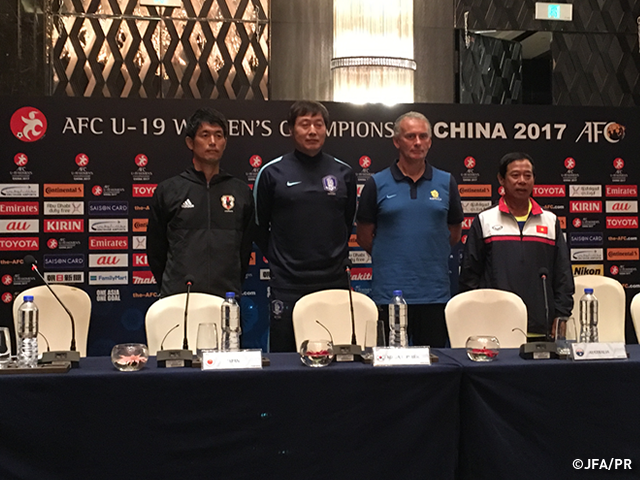 With two days to go before the first game of the AFC U-19 Women's Championship against Vietnam, U-19 Japan Women's National Team held an official training session on Saturday 14 October at Jiangning Sports Centre Stadium, where the coming match will be held. All the group-stage games for Japan will take place at this venue.

The players checked on the pitch conditions, while they simulated the coming game, and then practised delivering, scoring and defending against crosses in a one-hour session.

In the morning, coach IKEDA Futoshi along with coaches of other teams in the same group, Korea Republic, Australia, and Vietnam, appeared at an official press conference of the tournament. Ikeda expressed his enthusiasm, ‘I’d like both the team and the individuals to improve through this championship. Japan will participate as the previous champions, and we’re eager to become back-to-back champions to book a ticket in the World Cup in France next year.’

DF #2 ONO Nana (Nippon TV Menina)
In the afternoon, we practised passing and went through four-on-two drills, followed by training on delivering, scoring and defending against crosses. During the set-piece practice, defenders focused on not jumping too hastily to the cross balls, always keeping the opponents checked, and not allowing the opponents to take a shot. While we were at the stadium, we checked on the pitch conditions and looked around at the entire ground and the stands as well. Now that the opening match is coming the day after tomorrow it feels even more real. Although tomorrow’s session is the last one before the game, we’d like to hold a good practice in order for us to get in excellent condition.

MF #23 SATO Mizuka (JEF UNITED ICHIHARA CHIBA LADIES)
We checked the pitch conditions by going through a short practice session today. We went through step workout, basic passing and controlling as well as reacting to crosses. We also experienced the atmosphere inside the match site and got ready for the coming game. I’d like to perform well my given task that we have decided together and have been practicing since February in order to win the championship.