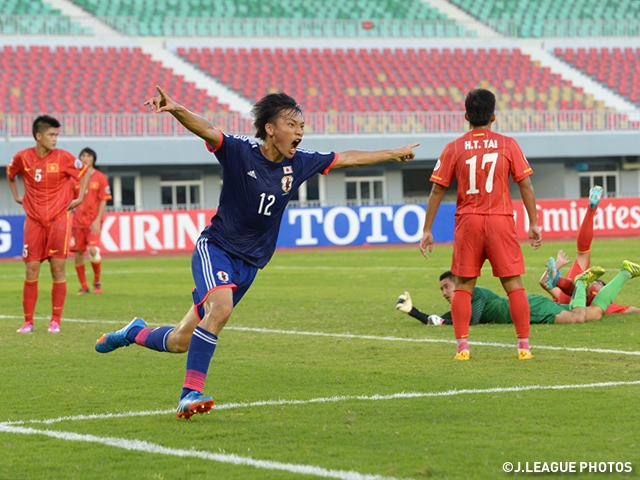 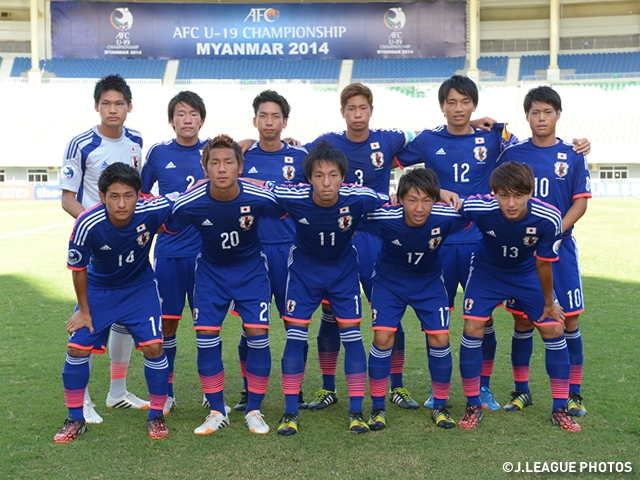 Second game against Vietnam National Team.
Japan was the side to attack in the first half. Sekine broke down right flank by dribbling and sent cross couple of times to the center but nobody could connect that ball for goal. But 30 minutes into the first half, scoring chance came up when unmarked Matsumoto shoot it but unfortunately it hit the crossbar and ended the first half.

Okugawa came off the bench for Matsumoto in the second half. Then in the 59th minute, substitute Okugawa intercepted deflected ball in the center of goal area and dribbled down the defence and shoot with his right feet. The shoot found left corner of the net for Japan’s opening goal. Continually Japan made chances in both flanks but hardly score additional goal partly due to good save by the other side goalkeeper.

In 88th minute, an accident occurred to Japan team. Okugawa who scored the opener injured right leg and left the pitch, Japan had to play the game with 10 players as all three substitutions were in already. In 90th minute, Vietnam picked up clear ball of Japan’s corner kick and launched counter-attack from right side and provided cross ball to the center for shoot and Japan was equalized in the last minute. At that time, only six minutes of extra time left in the game.

Japan was facing terrible pinch but the game wasn’t over yet. In 94th minute, Japan get corner kick in left and Nakatani netted home go-ahead goal for heading the corner kick from Mianmino. Furthermore, Ideguchi kept control the ball in right side in 96th minute broke down the defence line and kept dribbling to front of the goal, made it 3-1 with superb right feet shoot. The game was over and acquired badly needed three points for winning group stage. 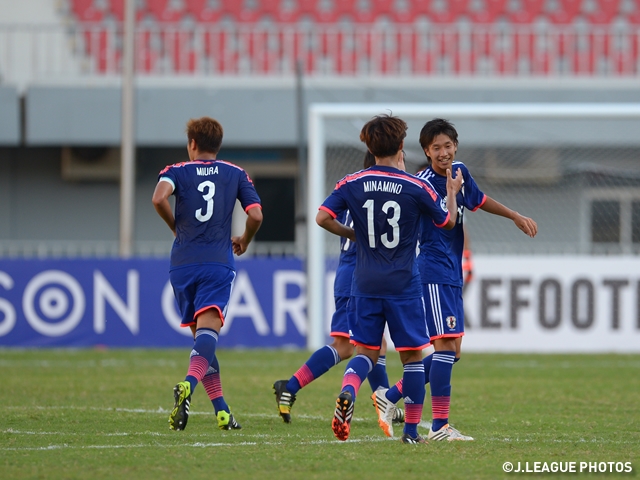 IDEGUCHI Yosuke (Gamba Osaka)
It was the game in very hot weather under strong sunshine as kickoff was 15:30. Because of this, there were many times in the first half the other side took control of the game as we had hard time moving and making a right judgment. In second half, we began to do a better defence up in front and created some scoring chances. But as with the game against China, we had a difficult game until the last part of the game because we kept missing scoring opportunities. In spite of these, it was really good we won the match and for I believe we kept running until the final whistle. The next match is against Korea which we can never lose. We want to hold good preparation for the game and take on Korea.

ISHIDA Ryoma (Jubilo Iwata U-18)
The game against Vietnam is the one we can never lose. Due to Hirose’s injury and leaving the pitch, I went to the pitch fully motivated and I am glad I could overlap and provide cross which were my strong points. But I am not satisfied with today’s performance for finding something to improve and I am going to adjust them for the next match by holding full training.

NAKAMURA Kosuke (Kashiwa Reysol)
It was a tough game but I am very glad to win the game. I am going to prepare for the game against Korea day after tomorrow. I’d like to request for giving us your continuous support.