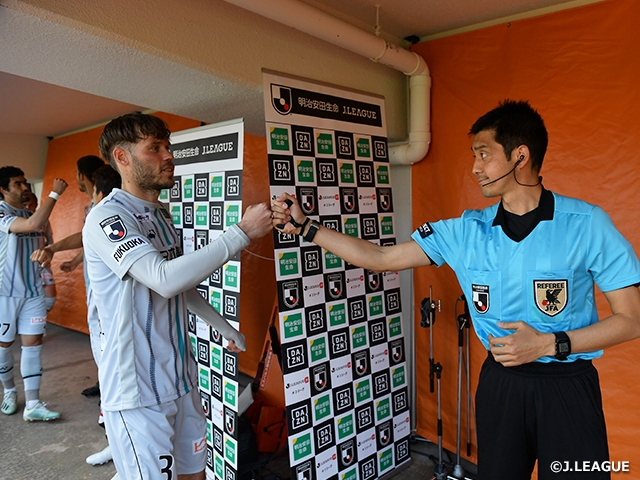 Such speculation circulated in the UK last fall. It is said that a software developed by a Swedish company can instantly determine offside based on the player’s “physique,” and make quicker decisions than the current video assistant referee (VAR) system, which determines offside by drawing a line on the video feed. The new system was already tested at the FIFA Club World Cup held in Qatar in December 2019 and said to have obtained positive results.

With goal-line technology (GLT) being introduced in 2012 and VARs officially approved in 2018, football is rapidly entering an era of “machine judgment.” Whether or not it will be used in next year’s FIFA World Cup, “robot referee” is no longer a fantasy.

In the J.League, VARs were used only in the first match-week last season, but it was determined that the system would be implemented in all 380 matches of J1 this season. So far, many spectacular goals were disallowed by VARs, and some have pointed out that the checking process takes too long. However, the overall impression was that VARs were being used quite effectively in the early stages of the season.

It is also impressive to see how submissive the players and coaches have become when decisions are made by VARs. They must be thinking, “There is nothing we can do once it’s checked by VARs.” Or perhaps, “It’s not worth arguing against VARs.” Either way, the decisions have been accepted without complaints.

It can be seen as a sign of trust and respect for VARs. They are aware that the decisions are made based on video footages from multiple angles and slow-motion feeds, so they think the decision must be correct.

However, the reality is, it hasn’t changed at all. Even with VARs, most of the decisions made during the match are made by the referee and two assistant referees. Which side took the final touch before the ball went out of bounds, was it a foul or not. Whether or not VARs is used in the match, the referees are still responsible of making decisions in good faith, including important decisions such as goals, penalty kicks, and red cards. These decisions are still being protested by players and coaches, with a new kind of protest, “Check with VAR,” being added to the repertoire.

In that sense, the respect for referees on the pitch has not changed since implementing VARs. In fact, it might have gotten worse. Players and coaches tend to think “There is no use arguing” because VARs are invisible, but it might have given them extra fuel to argue against the referees who are in front of them.

The goal of VARs is to minimise human errors causing substantial influence on match results, which would satisfy not only the teams, but the fans and referees who are involved in the match. In reality, however, it might have had a negative effect on the respect for the referees on the pitch.

When playing in a league with VARs, players and coaches should respect the decisions made by the referees that doesn’t involve VARs and focus on their own job (playing and coaching) as professionals. Before everything gets automated, we must reaffirm our respect towards the referees on the pitch. Otherwise, we will end up becoming slaves to machines in the near future.