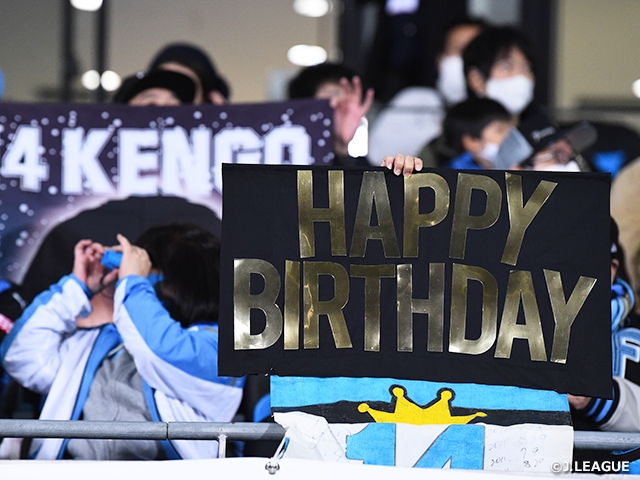 The record for the youngest player ever played in the J1 League was set by MORIMOTO Takayuki in 2004, when he was 15 years, 10 months, and six days old. On the other hand, the record for the oldest player is held by, of course, MIURA Kazuyoshi of Yokohama FC. He played in the match against Vissel Kobe on 8 November 2020, at 53 years, 8 months, and 13 days old, and played an active role in the match. By the time this article is released, his record may be renewed by himself.

Morimoto was still a junior high school student at that time. Kazu, on the other hand, continues to showcase his youthfulness, but his hair has turned silver-grey. It is one of J.League’s great virtues, that players who could easily be father and son, are competing against each other without any handicaps.

Meanwhile, it is regrettable that NAKAMURA Kengo, who has been the symbol of Kawasaki Frontale for a long time, has announced his retirement after this season. Despite suffering a serious injury last year, he has been leading the team with his ageless plays since returning this summer.

There was a wonderful scene at the match between Kawasaki Frontale and FC Tokyo at Todoroki Stadium on 31 October, when Nakamura celebrated his 40th birthday. The scene came during additional time of the first half, when Kawasaki led 1-0.

Kawasaki, who won the ball in the opponent's end, attacked the left flank, as MITOMA Kaoru broke through. With the ball being sent towards the centre, Nakamura made a perfectly timed run into the box and made a sliding effort to strike a right footed shot towards the upper left corner of the FC Tokyo goal. A hard struck, direct shot from 10 meters out was almost destined to find the net, but FC Tokyo’s goalkeeper HATANO Go made a jumping save, parrying the ball over the goal with his right hand.

Missing out on a golden opportunity, Nakamura looked devastated, but slowly made his way towards the goal and gave Hatano a fist bump with his right hand. In order to prevent the spread of the infection, the J.League is currently prohibiting not only handshakes and hugs, but also “high-fives” on the pitch. With Nakamura offering his fist, Hatano realised that it was a “fist bump,” and responded with his right fist.

Born in 1998, Hatano is currently 22 years old. He is a promising young talent who is striving to play for Japan in the Tokyo Olympics. He became professional from the FC Tokyo academy and made his J1 debut in August 2020. Hatano has been starting for the team since the previous match week, after veteran ‘keeper HAYASHI Akihiro injured in October.

Although he has plenty of experience in the J3 League, this was still his sixth match at the J1. A brilliant save made by a 22 year old ‘keeper, whom most would consider as a “debutant,” was praised by Nakamura, who is an 18 year veteran playing in his 463rd J1 match. It was a beautiful scene that can only be seen at the J.League. After the scene, Nakamura made his way to take a corner kick after the play.

However, this scene was not broadcasted on the J.League’s official broadcast channel “DAZN.” Because the scene came following a big scoring opportunity, replays were being showed during the live stream. This scene was actually captured by a supporter who was on the second tier of the back stand, near the corner of the goal Kawasaki was attacking. The video was posted on “YouTube” by a user named “J.League Supporter Channel,” and became viral among the fans.

Normally, when Nakamura's shot was saved, most people would stop recording, but the person continued to film the scene to capture this wonderful moment, and for that, I take off my hat to the person’s intuition. The video was titled, “Nakamura Kengo gives fist bump to Hatano Go who made a great save, Kawasaki Frontale passing the ball in front of the goal,” and it was posted soon after the match, receiving over 200,000 views at the time of writing.

There should be plenty more of such “respectful acts” in football and J.League matches. Not to mention the broadcasters, but we, who are in the press, must also use our intuition to find and share such wonderful scenes, so that we do not fall behind the “YouTuber” of the Kawasaki supporters.