Following their third group stage match against Iraq at the AFC U-19 Championship Indonesia 2018, where they marked their third victory of the tournament, the U-19 Japan National Team left Bogor to their next match site in Jakarta. On the following day, the team was given the half day off before holding an evening training session.

While the players who played in the previous match utilised the facilities of their hotel to go through recovery trainings, the reserve players trained at the training field located next to the main stadium. Ever since the start of the tournament, Coach KAGEYAMA and Coach AKIBA has demanded their players to heighten the quality of their plays. On this day, the players were asked to focus on their timing of the passes, and the speed of their transitions. Although the training session did not last for a long time, the players kept their focus to conduct a productive session. 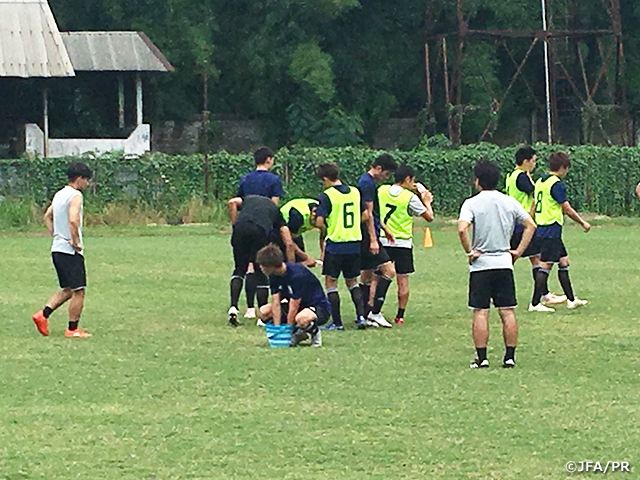 Can you tell what these players are doing pictured in this photo?
They are soaking their hands into ice water. Why do you think they are doing so?

The team has been taking measures against heat and this is a routine they have been adapting during their sessions. It was formally known that to cool one’s body, you need to cool down the parts of the body that contain the thick veins (neck, armpit, groin, etc.). However, to do so on the pitch, it requires many preparation and equipment, making it a less feasible way to cool one’s body.

In recent studies, it has been proven that the body contains a special type of veins that function to adjust the body temperature, and compared to the core of the body, the limbs can efficiently release the heat from the body. The players pictured in the photo are icing their palms and forearms during their training sessions to take measures against the extreme heat. The players are getting their body weight checked up before and after the sessions, as well as in the morning to monitor their conditions throughout this tournament.

It has been 10 days since the team has arrived at Indonesia. With the country located right on the equator, the temperature can rise over 30 degree Celsius at times. For the U-19 Japan National Team, dealing with this heat issue was a task they had to solve before participating in this tournament. The fact that they held a preparation camp at Malaysia was a part of their approach to tackle the issue. 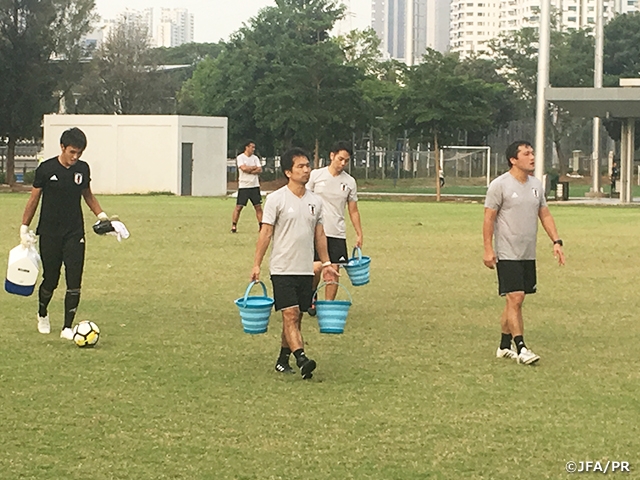 The team has been accompanied by a specialist in dealing with the heat, as Mr. NAKAMURA Daisuke from the Japan Institute of Sports Sciences (JISS) joined the crew for this tournament. Mr. Nakamura has attended the Olympic Games Rio 2016, Asian Games 2018, and many other sports events to support the national team. His support is not limited to just football, but as a JISS staff, he has supported many other athletes and teams from various sporting events. Mr. Nakamura took a main role in creating a handbook that lectured how to deal with the heat which was given out to the athletes participating at the recent Asian Games held in Indonesia.

Mr. Nakamura, who has been with the team since the preparation camp, shared his thoughts, “Not only for this U-19 AFC Championship, but the ability to deal with the heat will be an essential factor at the Tokyo Olympics and the FIFA World Cup Qatar in 2022. I am hoping that these medical measures can help this team achieve their goal of earning a spot into the U-20 World Cup and to win the U-19 AFC Championship title.”

The U-19 Japan National Team will now head into the knockout stage of the AFC U-19 Championship Indonesia 2018.

DF #2 HIGASHI Shunki (Sanfrecce Hiroshima Youth)
We are surrounded by a great atmosphere after winning the three group stage matches. However, the most important part of this tournament is yet to come, so we must maintain this positive vibe ahead of our next match. We have continued to communicate with each other and held meetings as we played in this tournament. After sharing our tasks in defence, we managed to keep a clean sheet in our third match. As much as the defensive aspects are important, getting myself involved in offence is another aspect I take great pride in. I hope to utilise my pass and dribble skills to initiate the team’s offence and create chances with my crosses. The ability to play well as a team is one of the strengths of Japan, so we will continue to play defence as a team while each one of us fight for the ball at the individual level as well. We will probably be facing a huge crowd, so it might be tough for us to hear ourselves on the pitch. We must make good eye contact, while each one of us take on our own tasks. We will enter the match with a strong intention and high concentration level.

DF #4 HASHIOKA Daiki (Urawa Reds)
I am glad that we have managed to score goals and win at each of the group stage matches. However, the fact that the team has conceded goals when I was on the pitch gives me some areas to improve on. I wasn’t playing in our third match, but I stayed vocal from the bench to help my team maintain a clean sheet. I feel like that is something we all must continue with. The players are having fun off the pitch, while showing great focus and intensity during the trainings. That is a part of the reason why we are surrounded by a good vibe right now. Indonesia is our next opponent at the quarterfinals and they are carrying great momentum right now. They will certainly come out aggressively against us, but we must match their intensity to win the balls and outrun them on the pitch. We will be playing under an away atmosphere, but we will just have to continue on what we have been doing and work as a team to earn the victory.

DF #22 MIKUNI Kenedeiebusu (Aomori Yamada High School)
We have been training with a great atmosphere. The team has conceded early in the match in consecutive matches, but after sharing our thoughts at the meetings and making adjustments at the training sessions, we have managed to keep a clean sheet in our third match against Iraq. We hope to carry this positive trend into our match against Indonesia and win the upcoming matches while keeping a clean sheet. I always keep in mind that I am representing the All Japan High School Athletic Federation. I will learn from those who are already playing at the professional level while I put in extra efforts to strive for higher levels. We will be playing our next match under a complete away environment, so we will stay united as a team to fight through the match and earn a clean sheet victory.