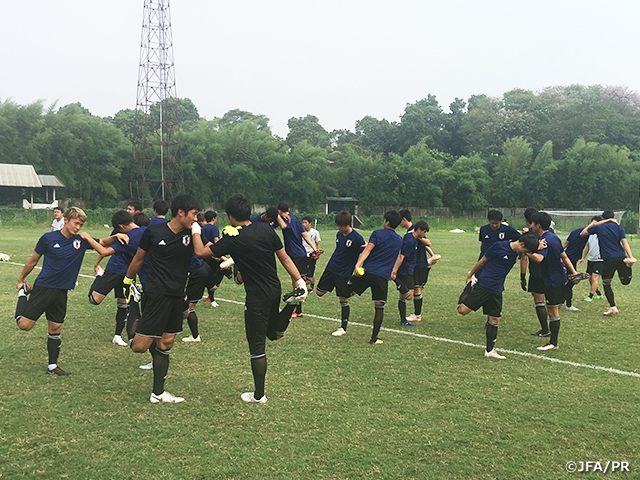 On Tuesday 24 October, the U-19 Japan National Team conducted their final tune-up ahead of their third group stage match against the U-19 Iraq National Team at the AFC U-19 Championship Indonesia 2018.

With the previous two matches kicking off in the evening, the players did not have to deal with the scorching heat, however, their next match kicks off at 16:00, where the climate is expected to be very hot, making it a difficult match for them. With that in consideration, the final training session was held at 15:00 on this day. Despite the extreme heat, the players showed great enthusiasm on the pitch as they stayed vocal throughout the session.

Towards the end of the session, rain drops started to sprinkle, and as everyone started to notice the rain, a sudden downpour drenched the field. The team experienced a similar situation during their first match against Korea DPR and continued on with their trainings despite the dramatic change in the environment. Coach KAGEYAMA mentioned after the session, “Our ability to adjust to sudden changes will be challenged. This can certainly happen during our match tomorrow.”

The U-19 Japan National Team kept their focus towards their final group stage match against Iraq and prepared themselves in both mentally and physically. 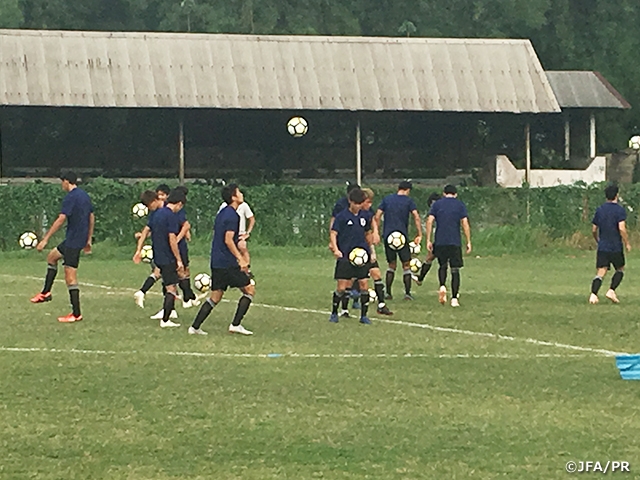 KAGEYAMA Masanaga, Coach (U-19 Japan National Team)
Although we have already advanced through the group stage, we are fully committed to win our next match against Iraq, who will be fighting for their spot into the next round. I have not decided who will start the match at this point, but I will take in consideration of their performance in our trainings and their conditions. We will also spend the remaining time to deepen our analysis of our opponents. I will determine our line-up after I gather all of the information. Although we have won two matches, we still need to improve in many aspects. We will continue to improve ourselves so that we can become a better team. The sudden downpour during today’s session gave us the opportunity to see who we cope against sudden changes in our surroundings. This type of scenarios can certainly happen during tomorrows match and in that moment, we must be able to take the upper hand against our opponents. Iraq consists with many players with great individual skills. They have quality players in each of the positions. Facing a team like Iraq, we must take a collective approach and utilise our team work, but at the same time, we would like to showcase that we can also win the individual battles. We will stay focus on our next match and next match only. We will give our very best to understand and overwhelm our opponents.

GK #12 TANI Kosei (Gamba Osaka)
We have gained great confidence after securing our spot into the next round with back-to-back wins. And it is very encouraging that the team is still striving for further development and higher goals. We have been sharing what we must fix in our next match and the team is surrounded by a great atmosphere. The fact that we have conceded three goals in two matches is something I am personally regretting, and I believe that’s part of the things we must improve on. It is very difficult to deal with the pitch conditions, as we must determine if the ball is going to skip or stop, while the opposing forward is making a run at us. During this tournament, Goalkeeper Coach TAKAHASHI and the goalkeepers has spoken to each other that once we are on the pitch, we must stick with our own decisions. In our match against Iraq, we must work on the tasks from the previous two matches and finish the group stage with a win. We cannot afford to lose any matches and we will push forward as a team, with every 23 players and staffs, to win the title.

DF #15 SEKO Ayumu (Cerezo Osaka U-18)
We have won two matches and build up a great atmosphere, so we hope to win our next match and enter the knockout stage on the high note. We have been able to showcase our style in offence, but our defence still has room for improvements, especially when dealing with the space behind our line. The Iraq side consists with many talented players and I have the impression that they are very physical. We must determine how they are going to approach the match and make the adjustments on the pitch. We have lost to them at the AFC U-16 Championship two years ago, so we would like to win this time.

FW #18 SAITO Koki (Yokohama FC Youth)
The team is surrounded with a positive vibe after winning two matches. We will continue to improve ourselves so that we can achieve our goals of winning the title and earning our ticket into the FIFA U-20 World Cup. I am happy that I have scored in back-to-back matches, that’s because my teammates have created the chances and allowed me to play freely, so I really want to pay them back by contributing for the team’s victory. I have been given the opportunity to play not just as a forward, but as a flank midfielder and it has given me a wider perspective as a player. Regardless of where I play, I hope to showcase my strengths and help the team win the matches. Even though Iraq consists players with high-quality individual skills, I will win the one-on-one battels and contribute for the team. 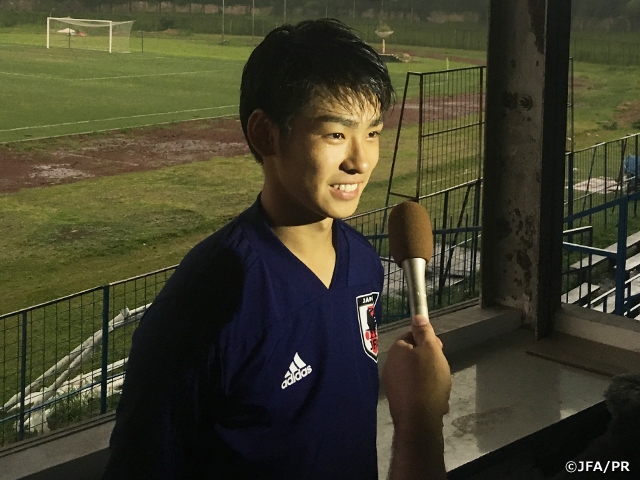