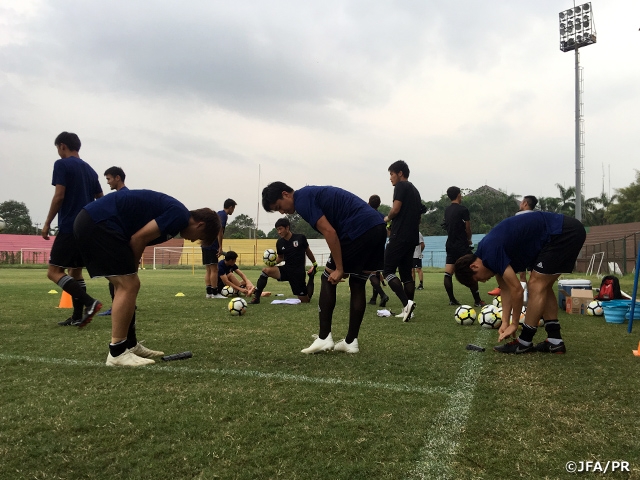 One day before their second group stage against the U-19 Thailand National Team, the U-19 Japan National Team held a training session on the evening of Sunday 21 October. Following their light workout session on the morning of Saturday 20 the players were given an entire day to rest up their bodies.

The session stared with team going through their usual agility drills, followed by drills using the ball to polish up their ball touches. As the team went through drills involving pass and ball control, both Coach KAGEYAMA and Coach AKIBA were seen telling their players to “Keep their pace up upon receiving the ball,” and to “Synchronise the movements,” demanding higher quality in each of their plays. 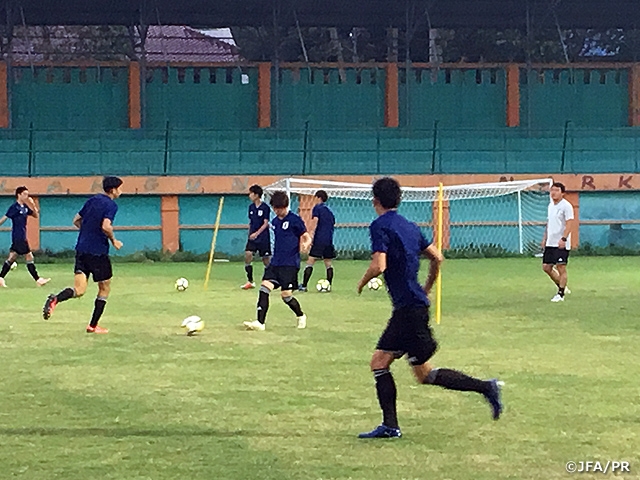 Except for the early portion, the session was conducted under closed doors as the team went through their tactics ahead of their match against Thailand. Coach Kageyama mentioned after the session, “Our opponent performed well in their first match and has also gained points. They will certainly come out with a strong determination to win the next match. We must analyse the opponent well and decide what we must do to win the match.”

KAGEYAMA Masanaga, Coach (U-19 Japan National Team)
Everyone is happy and relieved that we managed to win our first match. But at the same time, we are aware of what we must improve on. Especially because we won the match, I want my players to take a look at what they lack and improve on those aspects. In our first match, we made the match tough on ourselves after scoring the first two goals, and that is something we must fix. I have told my players that there is no such thing as an easy match, so we will utilise what we have learnt in the first match to improve ourselves. Depending on their playing time, each player is fatigued in different ways, but our staffs has responded to each of them as soon as the match ended.
Ever since we faced them in Mongolia last year, Thailand has left a totally different impression. I’ve observed their matches at the ASEAN’s AFF U-19 Tournament, but they probably had started their preparation from that time. Their playing style and players has changed dramatically. That’s why it is hard for us to predict how they will approach the match on the 22nd. With that being said, we must focus on ways to showcase our strengths in the match. Our opponent performed well in their first match and has also gained points. They will certainly come out with a strong determination to win the next match. We must analyse the opponent well and decide what we must do to win the match.
The Japanese players are capable of making adjustments against the opponent’s changes by communicating with each other, and I think that is one of our strong points. I hope my players will show us just that on the pitch tomorrow. We are preparing ourselves so that we can earn points in each of the matches. This team has shown great improvements with each match played. The players have also displayed their ability to effectively hold discussions during halftime and after the match. There are still many more pros and cons to this team, but I hope we can build on what we have and strive to become a better team.

MF #7 ITO Hiroki (Jubilo Iwata)
During this training session, we have gone over our attacking patterns and key points of our defence. In our previous match, despite scoring the first two goals, we allowed our opponents to level the match within the first half. However, we weren’t discouraged by it and managed to finish the first half with a tied score and started off the second half fresh. When MIYASHIRO was brought into the match, we saw a shift in momentum and we were able to score the goals. We must be able to utilise that momentum in our future matches as well. I am always anticipating to take shots from distance, so I will continue to do so and hopefully I can score more goals. We hope to attack as a team and score goals as a team. When we faced Thailand last year, they retreated deep in their territory and created a block in front of their goal, but we don’t know how they are going to approach the match tomorrow, so we will see how they come out in the early minutes and adjust accordingly. I will keep encouraging my teammates and perform so that the team can strive towards victory. I really feel like the team is getting united as a team, so we hope to keep this positive trend going. If we stay focused on each play, each match, the results will follow. We will give our very best on the 22nd.

MF #14 GOKE Yuta (Vissel Kobe)
We faced a tough match in our first match, but what matters the most is that we finished the match with a victory. As it was on display in our training session today, the team is surrounded by a positive atmosphere, and all of our focus is towards our next match. We must fix how we manage the game after we score goals. The team must keep on playing our game and prevent the opponents from creating opportunities. Thailand is a team that can be very creative in their set-plays, so we must be alerted and keep them away from scoring goals. They showcased a passive approach in the first round of qualification, but we don’t know how they will play this time, so we will just focus on playing our game and take control of the match. If I am given the chance to play, I will get myself involved in our goals, and help the team win. Our team’s biggest strength is our unity.

FW #20 MIYASHIRO Taisei (Kawasaki Frontale U-18)
Following our training camps in Japan and Malaysia, we are in great condition. We were very relieved to win our first match, but we cannot afford to sit on our laurels, so we will keep on working hard to prepare ourselves for the next match. Even if we score a goal, we will stay eager to score another goal. Our ability to take on the opponents in front of the opposing goal and our ball possession seemed to be effective, so we will continue to do so in our next match. I personally would like to earn good results, but more than anything, we want to earn the full three points, so we will fight as a team to win the match. We will enter the match as if this is our only match, and fight with strong determination. 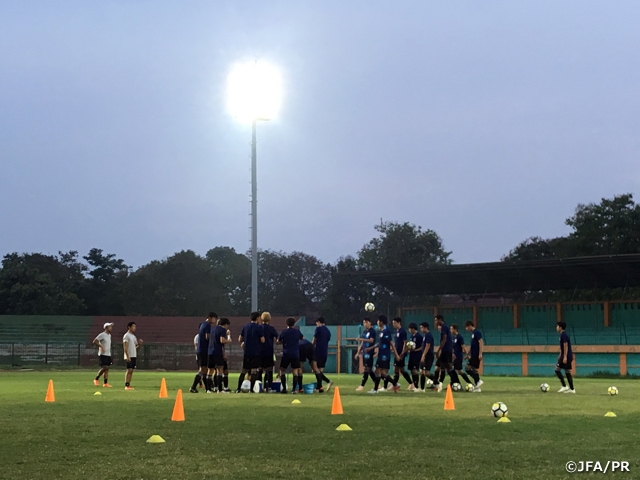