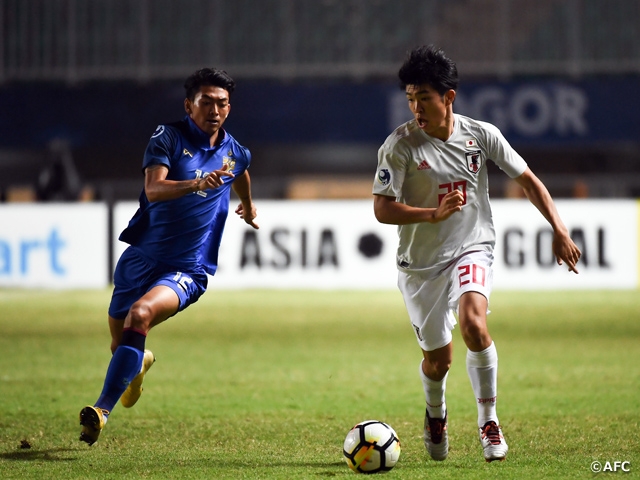 On Monday 22 October, the U-19 Japan National Team faced the U-19 Thailand National Team in their second group stage match of the AFC U-19 Championship Indonesia 2018, as the match kicked-off under a rather cool evening climate at Pakansari Stadium. 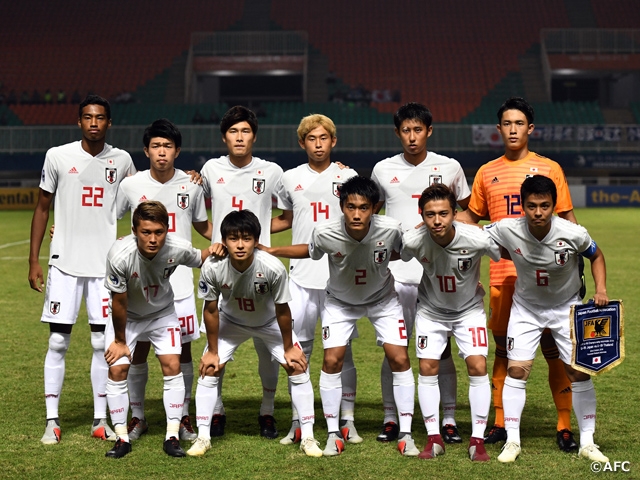 The first shot came in the second minute, when Abe received the ball in the left flank and took a shot after dribbling the ball deep into the opposing territory. While both teams showcased a style that emphasised on ball possession, Japan took the initiative with their aggressive defence, as they induced mistakes from their opponents and forced turnovers to initiate their attacks. In the 15th minute, the ball was connected through Ito, Saito, and Abe, before Abe combined with Higashi to penetrate the space in the flank. The cross delivered by Higashi found Goke in the far side, who dropped the ball down to allow Miyashiro to take a shot, but their efforts came short from finding the back of the net.

Japan continued to create multiple opportunities, and the opening goal came in the 27th minute, when Abe dribbled through the left flank and penetrated the penalty area before striking a shot. His shot was blocked by the opposing goalkeeper, but Miyashiro was there to convert the loose ball, giving Japan the opening goal. Abe continued to lead the way for the Japanese offence as they increased their pressure upfront. In the 42nd minute, he once again initiated their attack from the left side and penetrated the central area with his speed. As the opposing defenders made their approach to stop him, Abe released the ball to Saito, who was unmarked in the box, allowing him to capitalise on the opportunity to extend their lead to two goals. Two minutes later, Japan earned a freekick at the edge of the penalty area. Miyashiro converted the set-play to score his side’s third goal, sending the match into halftime with a score of 3-0. 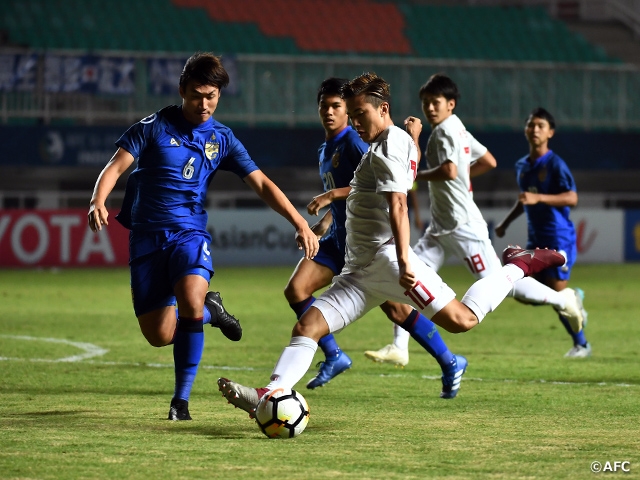 During halftime, YAMADA Kota (Yokohama F・Marinos) was brought into the match for Ito, as the Japanese side continued to showcase their dominance in ball possession. In the 53rd minute, Abe and Goke combined well with each other to carry the ball into the central area, as Abe delivered a through ball to Miyashiro in the box, but Miyashiro’s shot failed to capture the target. With their side struggling to create opportunities with their pass-works in the midfield, Thailand switched their style to utilising more longballs in the second half. Their approach proved to be effective against the compact defence showcased by Japan, as the space between the defence line and the goalkeeper was exploited in the 54th minute. A Thai forward chased down the long ball delivered into the space and captured the goal with a powerful shot. Japan came close to conceding another goal from a similar situation just three minutes later, but their goalkeeper Tani was able to make the save this time to keep their lead intact.

In efforts to score more goals, Japan created more chances in the second half, as Saito broke into the penalty area after combining with Goke in the 71st minute, but his shot was blocked by the Thai defence. HARA Taichi (F.C. Tokyo), who replaced Saito in the 73rd minute, created an opportunity in the 81st minute, when he initiated the attack from the right side. The ball was passed through multiple players before finding Miyashiro in front of the goal, but this attempt also failed to capture the goal. In the 87th minute, KUBO Takefusa (Yokohama F・Marinos) was brought onto the pitch to replace Goke, but the match did not see any further action, as the U-19 Japan National Team came out victorious with a final score of 3-1.

Korea DPR won the other match placed in Group B, as they defeated Iraq 1-0. As a result, Japan who has won the head-to-head match-up against Korea DPR locked up the top spot of the group, regardless of the outcome of their third match against Iraq.

KAGEYAMA Masanaga, Coach (U-19 Japan National Team)
Q：Please reflect on today’s match.
A：We still need to improve in many aspects. However, the players did well to maintain a good distance between each other and managed to possess the ball depending on where the opponents positioned themselves. The fact that we created many goal scoring opportunities tells me that our players made lots of challenges. But I still feel like we should have scored more goals. We seemed to lack quality in our final touches today.

Q：What was the reason behind rotating five players from the starting line-up?
A：We took in consideration of their conditions. But more than anything, our team consists with more than 10 players who are worthy of starting the match. Each of our players have their own character and by mixing and matching different players, we can showcase a totally different taste. So, considering their conditions and our opponents, I’ve decided to go with these 11 players today.

Q：What does it mean for the team that Saito and Abe played the entire match?
A：The two players performed superbly. They showcased their strengths very well. They have been plagued with fatigue and injuries, but the staffs’ efforts and their patience really paid off as they were able to return to the team nearly in their top form. We will be needing them in our future matches as well, so I was very relieved to see their performance today. The same thing can be said for many of our other players, and I am sure that the players who were unused in the match today are all itching to play. The players react differently against my squad selection. I have been focusing on utilising as many players as possible up until this point, but from here on, we also must focus on each of our matches and come up with the best possible line-up that can give us the best chance to win the match. With that being said, I am expecting my players to play as a team while keeping in mind what they can do to contribute for the team’s victory in each position.

Q：Even when the opponents brought in more attacking players, you did not bring in defensive substitutes today. Why was that?
A：In the closing minutes of our last match, we added another player in our defence line to go with three-players at the back. But in today’s match, we kept our focus on how to control the match when we had the lead. I also wanted to see how our players take advantage of the situation where they knew how their opponents were going to play against us. The fact that the match turned into a kicking game for a stint, was something we need to fix. However, we managed to showcase variations in our style as we switched from the aggressive pressing style to a more passive style where we dropped back and allowed our opponents to carry the ball.

Q：Any comments ahead of the next match?
A：I have not decided on the starting line-up yet. Although we have secured our spot into the next round as the group leader, we have not achieved anything, and we are not satisfied with our performance at all. It means a lot for us that we still have another match to play in the group stage. It gives us the opportunity to improve ourselves. We still have long ways to go, but we will continue to strive for higher stages and work hard to become a better team.

DF #22 MIKUNI Kenedeiebusu (Aomori Yamada High School)
I was nervous at first, but my teammates encouraged me so that I can enter the match in the right way. We couldn’t defend effectively against the balls played in the space behind our defence line, so that’s something we need to improve on. Hashioka stayed very vocal throughout the match and it helped us adjust our positions during the match. In the second half, we weren’t sure if our opponents were going to play the ball to the feet or into the space, and those are the situations where we had to communicate with each other and distinguish each other’s roles. Playing with Hashioka gives me a great learning experience. His positionings and perspectives were different from mine, so I hope to learn from him. Although we have secured our spot into the knockout stage, we will continue to work on our tasks ahead of our match against Iraq.

MF #6 SAITO Mitsuki (Shonan Bellmare)
We struggled to find our composure in the early minutes, but we gradually picked up our rhythm as we managed to win the second balls. We emphasised on making our opponents run, rather than scoring goals in the first half. Our approach drained out the stamina from the Thai side and midway through the first half, we managed to take control of the match. The players who are expected to score goals managed to score goals today. Our opponents did a great job to possess the ball, but we had the upper hand in winning the second balls. We kept on communicating with our defence line led by Hashioka and coordinated our approaches with the defensive players. Our conditions have gotten better, so we hope to continue on this positive trend. I have always heard that the competitions in Asia are tough, but I was able to experience that for the first time today. The match has given us a great learning experience. The fact that we didn’t allow our opponents to score further goals after we conceded the first goal, was something we should be proud of. Today’s match gave me many things to think about at a personal level. I may not be able to help the team with flashy plays, but I can win the second balls, provide support for the team, stay vocal, and make runs for the team. Shonan Bellmare has also made it to the final of the league cup and they are currently fighting their final matches of the league. As representatives of Bellmare, Ishihara and myself must showcase our determination that we are here to fight.

MF #10 ABE Hiroki (Kashima Antlers)
(Regarding the team’s first goal) I knew that a deflection off the goalkeeper can potentially be a big chance for us, so I struck the ball hard in an angle where the goalkeeper would deflect the ball towards the far side. (Regarding the assist) I saw the centre half coming out to defend against me, so I utilise the space he left behind. If you play the same way the entire match, the opponents will eventually get used to it, so I always try to focus on being creative and keeping my opponents guessing for the entire 90 minutes. I think I managed to do that today. Our team staffs have taken great care of us to keep us in great condition. Because of them, I was able to play with great form. In situations where the team is facing tough stretches, we need a player that can change the dynamics of the match with their performance and I hope to be a player like that. I will like to be that player that initiate a play to lift the team up, give words of encouragement, show a positive gesture, and bring positive vibes to the team.