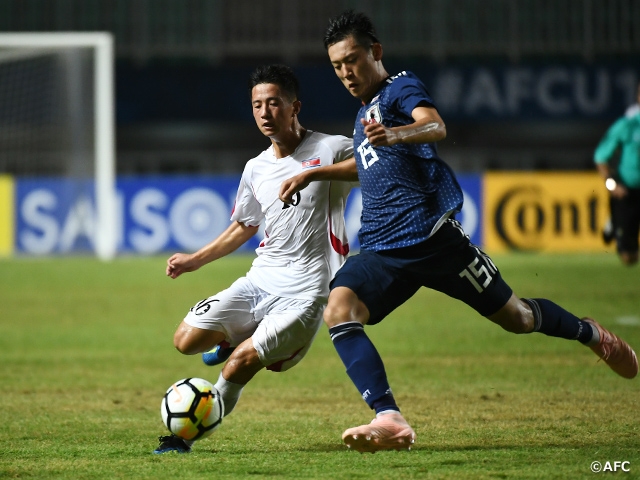 The U-19 Japan National Team took on the U-19 Korea DPR National Team in their first group stage match of the AFC U-19 Championship Indonesia 2018. The match was played at Pakansari Stadium under a stormy condition where thunder was heard from time to time.

With the pouring rain picking up its pace, the match kicked off as the starting line-up of the Japanese side featured TANI Kosei (Gamba Osaka) as their goalkeeper, along with a defence line constructed by SUGAWARA Yukinari (Nagoya Grampus U-18), HASHIOKA Daiki (Urawa Reds), SEKO Ayumu (Cerezo Osaka U-18), and HIGASHI Shunki (Sanfrecce Hiroshima Youth), while FUJIMOTO Kanya (Tokyo Verdy) and the team captain of the match, ITO Hiroki (Jubilo Iwata) played as the defensive midfielders. GOKE Yuta (Vissel Kobe), KUBO Takefusa (Yokohama F・Marinos), and SAITO Koki (Yokohama FC Youth) formed the attacking midfield while TAGAWA Kyosuke (Sagan Tosu) was named as the lone striker upfront. 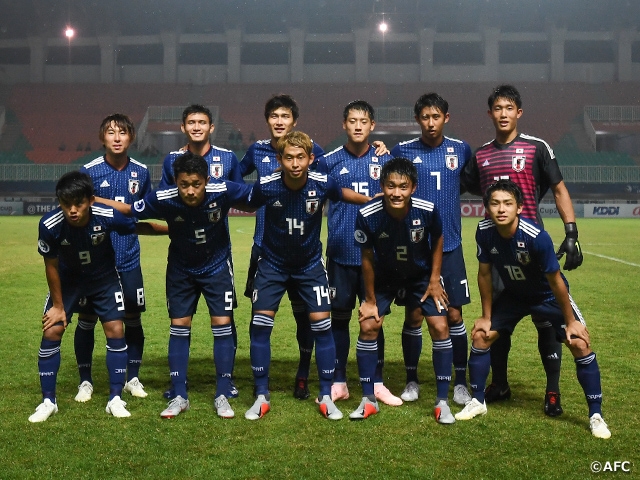 The early minutes of the match saw Japan taking control of the match as they possessed the ball well against the Korea DPR side who entered the match with a defensive approach. In the eighth minute, Kubo received the ball from Fujimoto and dribbled through the midfield before sending a through ball into the penalty area. Saito was able to free himself up as he chased the ball and struck a shot. The shot was once blocked by the opposing goalkeeper, but Saito managed to convert the loose ball into the net to give his side an early lead. Japan managed to extend their lead in the 19th minute, when Sugawara, Fujimoto, and Saito exchanged passes before sending the ball to Ito. With the open space ahead of him, Ito dribbled up the field before striking a shot from distance which the ball carried nearly 30 meters before finding the back of the net.

After conceding two goals to Japan, the Korea DPR players started to utilise simple long balls to penetrate the open space, while their attacking players showcased great aggression to chase down the ball. Their aggressive approach has changed the tides of the match as Japan started to lose control of their possession and became more passive. In the 36th minute, Korea DPR penetrated the flank before sending a sharp grounder towards the goal, which KYE TAM managed to redirect into the goal to cut their deficit in half. Now with momentum on their side, Korea DPR started to showcase more one-touch plays, which enabled them to break through the Japanese defence line. The equaliser came in the 40th minute when a ball was delivered in the space between the Japanese defenders and the goalkeeper, inducing a foul in the box to earn a penalty kick. KANG KUK CHOL calmly converted the spot kick to level the match and send the match into halftime with an even score.

Korea DPR continued to apply pressure upfront in the second half, while Japan anticipated for their opportunities to attack, but neither side managed to score the go-ahead goal. In efforts to break the deadlock, Japan brought in MIYASHIRO Taisei (Kawasaki Frontale U-18) for Tagawa in the 63rd minute. In his very first play of the match, Miyashiro made a swift turn upon receiving a pass and dribbled up the field, deep in the Korea DPR territory. His effort induced a foul from his opponent, earning a free kick from about 25 meters out from the goal. It was Kubo who stepped up to take the spot kick as he struck a left footed shot that pierced the upper right-hand corner to give Japan the lead. Japan came close to conceding a goal in the 74th minute when they gave up a freekick in the right flank of their territory. From this set-play, the ball was delivered into the box where a Korea DPR player managed to control the ball and fire a shot, but the Japanese goalkeeper Tani made a fine save to maintain their lead. 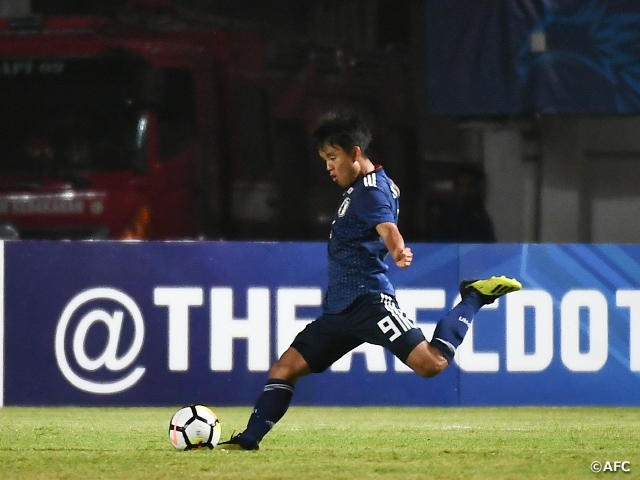 The match would see a quick turn of an event when a Korea DPR player was sent off in the 82nd minute after receiving a red card for a flagrant foul committed to win the ball in the air. Despite incuring a numerical disadvantage, Korea DPR placed more players upfront to rally back. In response, Japan sent out ABE Hiroki (Kashima Antlers) to their offense while adding MIKUNI Kenedeiebusu (Aomori Yamada High School) into their defence, as Hashioka, Mikuni, and Seko formed the three-man defence line to respond against the quick fast breaks generated by the Korea DPR side. Japan managed to extend their lead in the 90th minute when Sugawara delivered a long ball from their own half to Miyashiro who was making a run in the right flank. Miyashiro showcased great speed, as he dribbled all the way into the penalty area and fired a shot that captured the goal. In the third minute of additional time, Japan added an insurance goal when Fujimoto delivered a pass to Abe who had positioned himself at the edge of the penalty box. Once receiving the ball, Abe struck the ball before the opposing defenders can close down on him, as his shot found the back of the net to give Japan a 5-2 lead at the final whistle. The final two goals have given Japan a great advantage ahead of their remaining two group stage match, as they now have a total of five goals and a plus three goal differential.

In the other match in Group B, Thailand and Iraq ended with a 3-3 draw.

KAGEYAMA Masanaga, Coach (U-19 Japan National Team)
The fact that our team managed to reset both of our offence and defence in the second half was huge for us. Not only the players on the pitch, but the entire team has contributed to this victory. The reserve players did a great job to stay prepared and excelled once being brought into the game. The way we finished today’s match has given us great confidence ahead of our remaining matches. The four age groups have really gotten together to function as a team. However, we still have many aspects to improve on, as we have conceded two goals today. It is important that we keep developing ourselves while we fight through these matches.

DF #4  HASHIOKA Daiki (Urawa Reds)
I have entered this tournament with the strong intention to play a key role in our defence. It was unfortunate that we have conceded two goals today and that is an aspect we must improve on. But at the same time, we did not allow more than two goals and the team managed to bounce back after conceding the goals. That’s something we should be proud of, and we need to build on those positives as well. We must keep communicating, not just in defence, but the entire team needs to be vocal to improve ourselves. Our opponents showcased great intensity in one-on-one situations and it was such a tough match, but we focused on keeping our composure and staying calm at all times.

DF #5 SUGAWARA Yukinari (Nagoya Grampus U-18)
Both teams fought under the same condition, so we can’t really complain about the conditions of the match. If we show a negative attitude while our opponents stay positive, it creates that much gap between us and our opponents. We must stay focused on those tiny details when we play these matches. If something happens on the pitch, who ever is on the pitch should make the adjustments to solve that problem. I think every player on this team is capable of doing so. It was great that we managed to experiment with new formations during the match. Just knowing that we are capable of making the change gives us great confidence moving forward. We will continue to strive higher levels as a team and fight through as one.

FW #18 SAITO Koki (Yokohama FC Youth)
I am glad that I managed to score a goal, but I am not satisfied with my overall performance, so I will make the adjustments ahead of our next match. The fact that we managed to score early in the match helped us in a mental aspect, because we looked a little nervous to start the match and we were all very eager to score a goal. In our next match, I hope to implement what I have learnt from today and score goals to help the team win. We will continue to fight as a team and strive to earn our ticket into the World Cup.

FW #20 MIYASHIRO Taisei (Kawasaki Frontale U-18)
I was told to settle the ball upfront and initiate the team’s attack, so every time I received the ball, I was seeking for the opportunity to carry the ball forward. I am glad I was able to impact the match with my first play on the pitch. In the scene where I scored the goal, I saw my teammate making a run, but I opted to take a shot without hesitation, and I think that decision led to that goal. I believe that it is important to have competition among the team. I must earn results in order to gain my spot into the starting line-up, and we hope to push and challenge each other to heighten the overall level of the team. Today, we have learnt that it is not easy to win in Asia. We hope to utilise this experience in our future matches. We must continue to fight as a team in order to win the title in Asia and earn our spot into the World Cup.