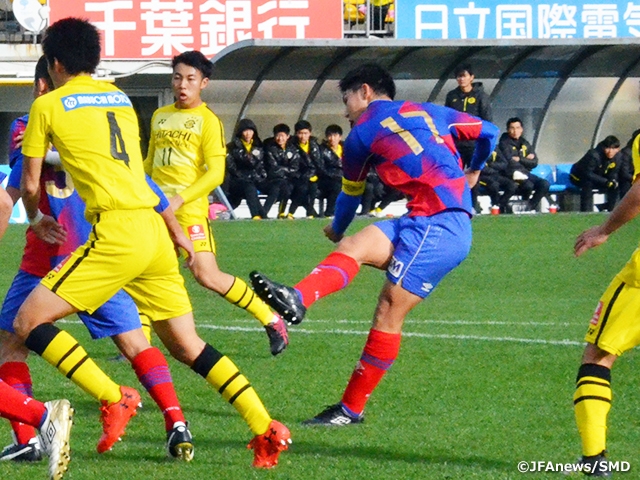 The 18th Sec. of the Prince Takamado Trophy JFA U-18 Football Premier League EAST was played on Sunday 9 December, where fifth place Kashiwa Reysol U-18 (Chiba) and ninth place FC Tokyo U-18 (Tokyo) squared off each other.

In a matchup between the Kashiwa side who secured their spot in the Premier League last Sec., and the Tokyo side who needs a win to keep their hopes alive to remain in the league, showcased a heated battle.

It was FC Tokyo who took the initiative with their speedy approach to the ball and quick ball movements. Kashiwa on the other hand, utilised the width of the field to initiate their attacks, as they came close to capturing the opening goal in the 14th minute, but their attempt was denied by the tenacious efforts made by the FC Tokyo defence line.

In the 34th minute, FC Tokyo’s HAGA Asahi (#10) initiated the attack by sending the ball to BANGUNAGANDE Kashifu (#22), who broke through the left flank before sending a cross towards the centre. Midfielder TERAYAMA Tsubasa (#17) responded to this cross and struck a shot into the Kashiwa goal to give his side the opening goal. With momentum on their side, the Tokyo side continued to create opportunities in the remaining minutes of the first half, but fell short from extending their lead, as the match entered halftime with a score of 1-0. 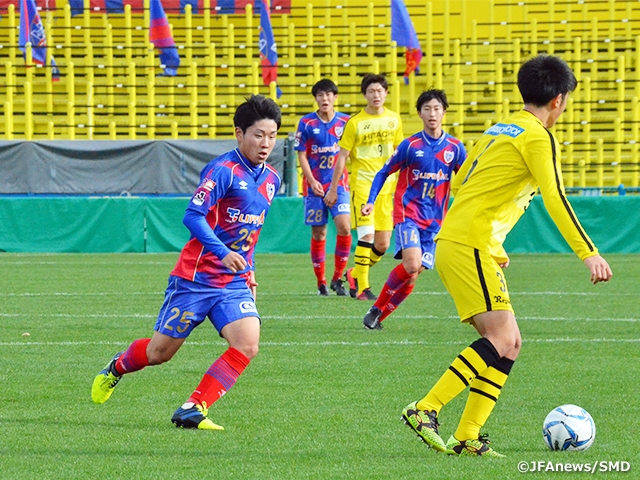 The second half saw Kashiwa finding their rhythm, as they controlled the ball through their quick passes and direct plays to threaten the FC Tokyo goal.

Kashiwa created multiple opportunities to equalise the match, as defender SADAHIRO Daisuke (#2) made an overlapping run to penetrate the flank in the 67th minute, but his final pass failed to connect with SHODA Norihiro (#10). Their attempt in the 79th minute also came short as MORI Kaito’s (#9) shot taken inside of the box was denied by FC Tokyo’s goalkeeper NOZAWA Taishi Brandon (#30). 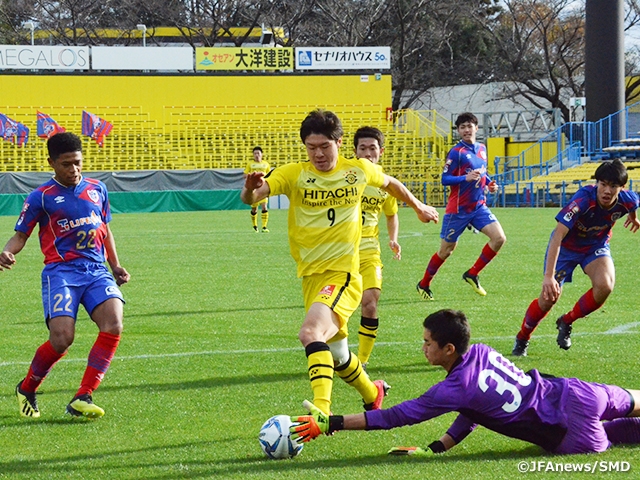 While showcasing their persistent efforts in defence, FC Tokyo anticipated for their chances to extend the lead through counter attacks, but the intense battle between the two sides ended with a score of 1-0, as Terayama’s first half goal proved to be the deciding goal of the match.

Following their championship campaign from last year, FC Tokyo finished up the final three matches of the season with a record of two wins and a draw, but with Urawa Red Diamonds Youth (seventh) and Jubilo Iwata U-18 (eighth) drawing their match, the Tokyo side was relegated from the Premier League and will be joining the Kanto Prince League for the first time since their 2011 season.

YAMANAKA Shin, Coach (Kashiwa Reysol U-18)
This was the final match for the third-grade players, and I knew they had an extra motivation to perform well, so that is why I started them in today’s line-up. The result was disappointing, but in the Premier League, the intensity level is extremely high, and there is no such thing as an easy game. Our players showcased their strong intention to stay aggressive under any given circumstances. Throughout the year, we faced some tough times, but the players managed to keep thinking, make adjustments, and show great improvements. This season has been a very fruitful season for our players.

DF #4 SUGII Hayate (Kashiwa Reysol U-18)
Although I managed to showcase my colour, I am disappointed that we couldn’t win the match today. Not just this single match, but throughout the season, I feel like I could have done better. As a team, we have strived for a dominant style of football where we take control of the ball and space to win the league title, but the level of the Premier League did not allow us to make that in reality. We faced some tough stretches where we lost consecutive matches, but the team kept on supporting each other and showed great growths over the season. I was really able to enjoy the competition while feeling grateful for the opportunity.

SATO Kazuki, Coach (FC Tokyo U-18)
We gave our very best to showcase what we have worked on all season and strived to earn the full three points in this match. Our primary focus was set towards the individual growths, and the team did well even when we had to miss some of the players due to their duty with the U-23 team. In our final match, we were able to showcase our pride, and that is a proof that the players have inherited the FC Tokyo spirit and tradition. It is a bit regretful that their improvements came in such a late part of the season, but their career will continue on. I want my players to feed off of this bitterness and strive for higher levels as a football player.

MF #17 TERAYAMA Tsubasa (FC Tokyo U-18)
Our fate was dependent on other team’s match results, so we just focused on winning our match. We managed to play with aggression in the first half, and carry out our style of football, which led to us scoring the first goal in an ideal run of play. The team stayed composed in the second half, even when Kashiwa took control of the match. We lacked cohesiveness in the early parts of the season, and I felt responsible as the team captain. However, the team did well to showcase great unity in our final stretch of the season and showcased the FC Tokyo pride. It’s very disappointing that we are getting relegated, but we will feed off of this experience to strive for higher goals.

In the match between the two high school sides, Aomori Yamada High School (Aomori) took the upper hand after getting past three goals against Ichiritsu Funabashi High School (Chiba). Shimizu S-pulse Youth (Shizuoka) recorded a sweeping victory over Toyama Daiichi High School (Toyama), while the league champions Kashima Antlers Youth (Ibaraki) capped off their season with a victory over Ryutsukeizaidai Kashiwa High School (Chiba) at home. The match between Jubilo Iwata U-18 (Shizuoka) and Urawa Red Diamonds Youth (Saitama) ended in a scoreless draw to secure both teams’ spot in the next season’s Premier League.