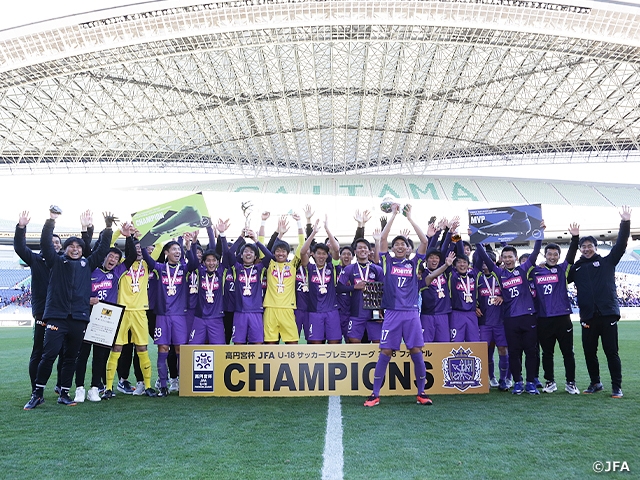 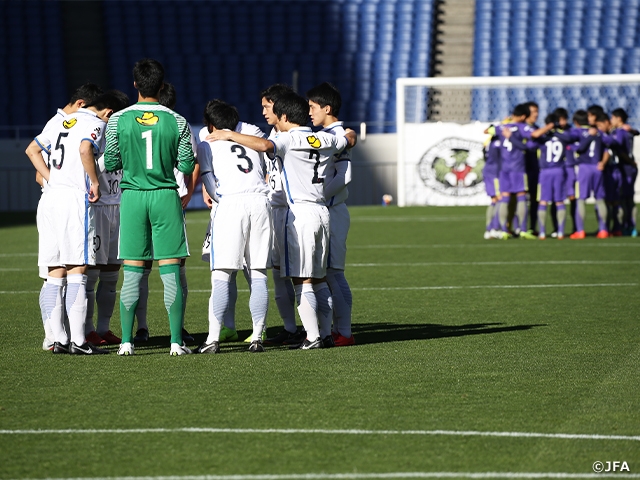 The match started with both sides taking a passive approach, but it was the Hiroshima side who gradually took the initiative of the match as they created opportunities from their side attacks. Hiroshima threatened the Kashima goal in the 17th minute, when KATSURA Rikuto (#10) struck a header off a cross delivered by HIGASHI Shunki (#11), followed by another attempt in the 25th minute, this time AYUKAWA Shun (#19) making an effort off a delivery from YAMASAKI Taichi (#8), but Kashima’s goalkeeper YAMADA Taiki (#1) made the save in both occasions. Kashima on the other hand came close in the 33rd minute, when MAEDA Taira (#10) dribbled through deep in the Hiroshima territory, but his shot came short from finding the back of the net.

The opening goal came in the 37th minute, when Higashi delivered a cross from the left flank, which found the second-year striker Ayukawa in the box. Ayukawa’s header glanced off the right post and shook the net, giving Hiroshima the long-awaited lead. Hiroshima almost doubled their lead just a minute later, when MATSUMOTO Hiroya (#4) struck a powerful shot from distance, but his effort was saved by the opposing keeper.

Hiroshima carried their momentum into the second half as they continued to attack the Kashima side. In the 52nd minute, Matsumoto fired a shot following a left corner kick delivered by SUZU Naoki (#5). The shot deflected off the hand of the opposing defender, giving a penalty kick for the Hiroshima side. Midfielder OHORI Ryonosuke (#14) calmly converted the spot kick to extend their lead to two goals. 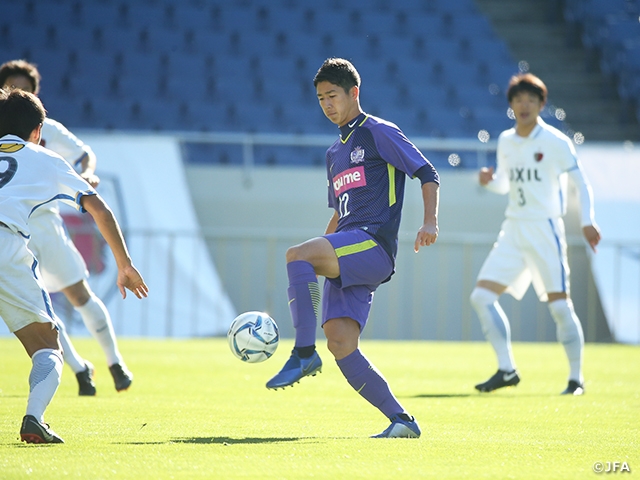 Now down by two goals, Kashima utilised their substitutes to change the dynamics of the match. Their move soon proves to be effective as the substituted forward SUGIYAMA Manato (#11) capitalised on the free kick delivered by ONUMA Tatsuki (#8) in the 64th minute to cut their deficit in half. In efforts to equalise the match, Kashima continued to attack fiercely in the remaining minutes of the match. In the 72nd minute, defender YUKI Masataka (#2) made a sharp drive into the area before striking a shot, followed by an attempt with his header off a delivery from SASAKI Shogo (#7) in the 88th minute, but both attempts made by the defender failed to capture the target. In additional time, Sugiyama struck a header, but his shot was saved by the Hiroshima goalkeeper SATO Kaito (#1). Despite the tenacious efforts made by the Kashima offence, Hiroshima’s defence prevailed, as they took down the match with a final score of 2-1. With this victory, Hiroshima captured their third national title, first since 2012, and crowned as the champions among 46,164 teams.

KUMAGAI Koji, Coach (Kashima Antlers Youth)
The two goals we conceded has derailed us from our game plan. To be honest, I feel that we turned out too passive today. In the first half, we had a group of payers who wanted to press aggressively and another group of players who wanted to stay put in their position, which created a gap within the team. We conceded another goal early in the second half, and at that point, our plan to construct the match through our substitutions went out of the window. This team had very small expectations at the early stage of the season. However, I have always believed in their individual potential. We had to make many efforts to lead the team to face the same direction, and we made gradual progress to make it this far. I want the players to be confident of what they have achieved, but at the same time realise what they lacked and strive to reach for a higher level.

MF #10 MAEDA Taira (Kashima Antlers Youth)
The fact that we conceded the opening goal is something we are regretful of. We reset our minds during halftime and entered the second half with the intention to score back, but we ended up giving up another goal. Although we managed to rally back in the second half, the fact that we couldn’t capture the victory shows that we still have long ways to go. Throughout the season, we have managed to win matches through our tenacious defence, so the fact that we conceded the opening goal turned out to be a huge burden for us today. I feel like we weren’t able to showcase what we have been working on all year. We entered the season with a goal to avoid relegation, but miraculously we made it his far, and that’s something we should be proud of. It’s disappointing that we couldn’t win at the final, but I am grateful for all the people who has supported us. This wouldn’t be made possible without the support of our teammates, parents, supporters, and all the people who has supported us in many ways, so I will continue to work hard to strive for the next level while staying thankful for everyone surrounding me.

SAWADA Kentaro, Coach (Sanfrecce Hiroshima F.C Youth)
Even when you know exactly what you must do, it is very difficult to execute it, especially at a major stage like this. Our players did extremely well to perform to their full potential. This victory should give our players great confidence moving forward. Ever since the regime under Coach MORIYAMA (Yoshiro), and even before his helm, Sanfrecce’s youth team has been a major force to be reckon with and produced many talented players. In order to make the young talents to want to join the Sanfrecce youth team, we had to earn positive results. But that is not an easy task. My first year as a coach made me realise that even with great talents, we can’t win matches without them becoming a great team. At this youth level, it is very important to build a strong team and I have continued to strive for it. This year, we faced some very difficult stretches, including the league matches, but managed to win the league title in our final match. In today’s match, we also faced some tough stints, but managed to earn the championship at the end. I feel like I was able to nurture the spirit of Sanfrecce to my players, so I am relieved in that sense.

MF #4 MATSUMOTO Hiroya (Sanfrecce Hiroshima F.C Youth)
We had many of our former players watching us today, so I am glad that we were able to earn the title while showcasing just how much we have improved. Our trainings have been really tough, but it has helped us capture the national title. With the Premier League matches scheduled each week, I worked hard so that I can earn playing time in those matches when I was in first and second grade. Once I was in third grade and given the role as the team captain, I had a strong sense of responsibility that I had to lead the team. That gave me more motivation to fight through the tough training sessions and helped me work even harder. We still need to improve on our ball possession, but we managed to showcase great persistence in our defence as a team. Even when our opponents dominated the closing minutes of the match, we kept talking to each other that we can win the match if we kept our intensity high. Especially after losing the Club Youth match against Omiya Ardija Youth with a last-minute goal, we were committed to keep our concentration until the very end today. We were able to showcase what we have been working on in the past three years and take down the title. This has been a great learning experience for me, but I will not sit on my laurels and keep striving for higher goals.