After securing their league title the day before, Kashima draws with Toyama Daiichi at the 17th Sec. of Prince Takamado Trophy JFA U-18 Football Premier League EAST 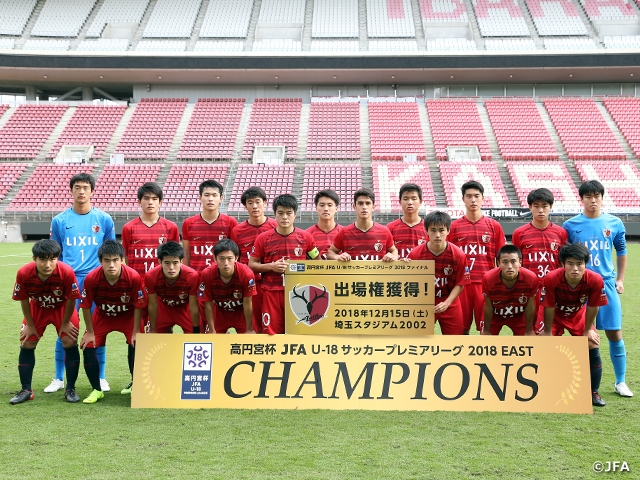 With the league’s second place team, Aomori Yamada High School (Aomori) dropping their match against Shimizu S-pulse Youth (Shizuoka) on the day before, Kashima has already locked up the league title prior to their own match. As Coach KUMAGAI Koji described, “We knew this was going to be a tough match,” the situation made it difficult for the Kashima side to maintain their motivation ahead of the match.

Kashima’s midfielder MAEDA Taira (#10) later reflected on how they entered the match, “We knew Toyama Daiichi was coming to attack from the beginning, but we lacked intensity to start the match.” Kashima seemingly lacked concentration in the early minutes of the match, as they made uncharacteristic mistakes. In the 18th minute, Toyama Daiichi’s forward KOMORI Hiro (#10) forced a turnover deep in the Kashima territory and capitalised the opportunity to strike the opening goal. 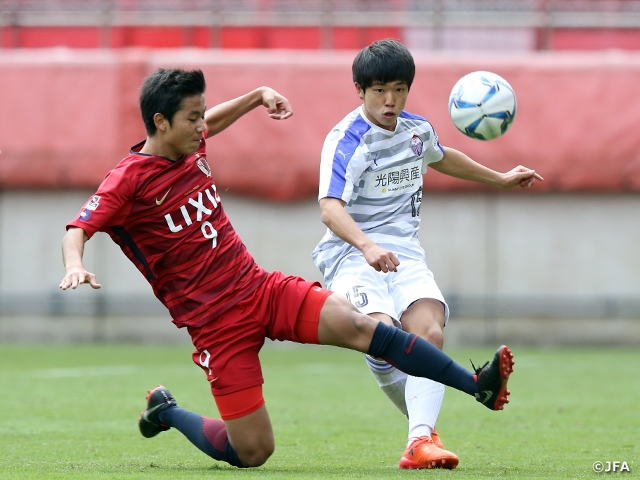 With momentum on their side, Toyama Daiichi took the initiative of the match as they showcased great transitions between their defence and offence. Despite the team being set for relegation for the next season, Toyama Daiichi displayed great efforts throughout the match. Kashima came up with their first major chance in the 45th minute, but SASAKI Shogo’s (#7) long range effort was denied by the opposing defender.

During halftime, Kashima brought in two new players to make the adjustments. The league champs shifted their positions to utilise the width of the field and created opportunities to rally back. Chances were created by their set-pieces, but Toyama Daiichi responded well to deny them from equalising the match.

In the 82nd minute, Kashima’s defender YUKI Masataka (#2) delivered a cross from the right flank allowing the second half substitute, SUGIYAMA Manato (#11) to capture the goal with his header. With the scores levelled, Kashima attacked fiercely in the remaining minutes of the match to take the lead, but Toyama Daiichi did well to deflect the attacks, as the match ended with a final score of 1-1. 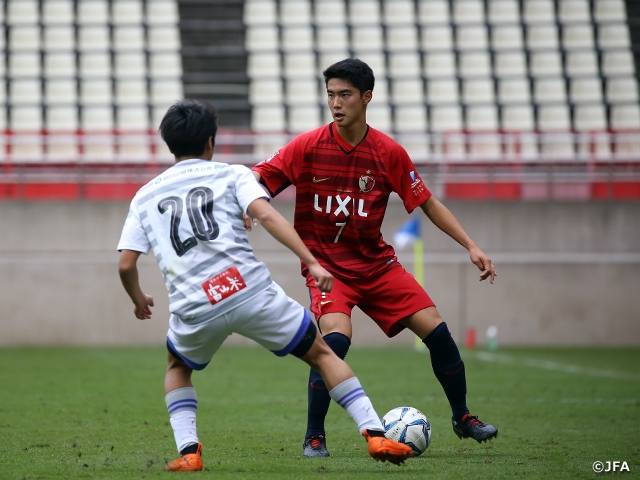 Following the match, Kashima’s Coach Kumagai mentioned that he gave a pep-talk to his players regarding the result of the match, but at the same time praised the players for their season long efforts, “We entered the season with a goal to avoid relegation, but the players did very well throughout the season.”

Kashima will now play in the Prince Takamado Trophy JFA U-18 Football Premier League Final, which will be held on Saturday 15 December at Saitama Stadium 2002. Ahead of the big match, Coach Kumagai stated, “We will prepare ourselves in the best way possible and leave no regrets at the match.”

KUMAGAI Koji, Coach (Kashima Antlers Youth)
Compared to the recent years, this year’s team featured many adventurous players and they showed great improvements in their mentality as the season progressed. The players were able to gain more and more confidence as we won more matches throughout the season. However, there were times where they were sitting on their laurels, so I hope today’s match has taught them a good lesson.

DF #7 SASAKI Shogo (Kashima Antlers Youth)
I was great that we won the title, but we wanted to earn the title with a victory. When we entered the league, our initial goal was to avoid relegation. I think the result came from us preparing and taking each match at a time. Our coach expects more from me, so I hope to contribute to the team’s victory in our final league match and the final.

MF #10 MAEDA Taira (Kashima Antlers Youth)
After being notified that we have won the title, we weren’t able to perform to our full potential. We saw similar situations throughout the season, and we must become mentally stronger so that we can play to the fullest under any given circumstances. In terms of football, there were many aspects the team lacked prior to the season, but we managed to improve ourselves gradually as we played the matches. This will be our final two matches wearing this uniform, so we will unite as a team and strive to earn victories in those matches.

OTSUKA Ichiro, Coach (Toyama Daiichi High School)
Despite this match coming after our relegation has already been determined, the players did well to reset their mind and fight through the match with great intention. Playing against the league champions at a wonderful stadium might have contributed to our motivation to play. The players did well to execute the game plan and the opening goal came from a play we were anticipating for. Although we conceded the equaliser in the second half, we were able to test out new players in the defence and allowed us to prepare ahead of the next match.

Second place Aomori Yamada High School (Aomori) suffered their first loss of the season as they dropped the away match against Shimizu S-pulse Youth (Shizuoka). As a result, Kashima locked up their league title prior to their match. The relegation battle will continue to the final Sec. as ninth place FC Tokyo U-18 (Tokyo) won over Ichiritsu Funabashi High School (Chiba). The match between Urawa Red Diamonds Youth (Saitama) and Kashiwa Reysol U-18 (Chiba) ended in a scoreless draw, while Jubilo Iwata U-18 (Shizuoka) won against Ryutsukeizaidai Kashiwa High School (Chiba).