With the help of their young power, Cerezo Osaka U-18 defeats Higashi Fukuoka at the 16th Sec. of Prince Takamado Trophy JFA U-18 Football Premier League WEST 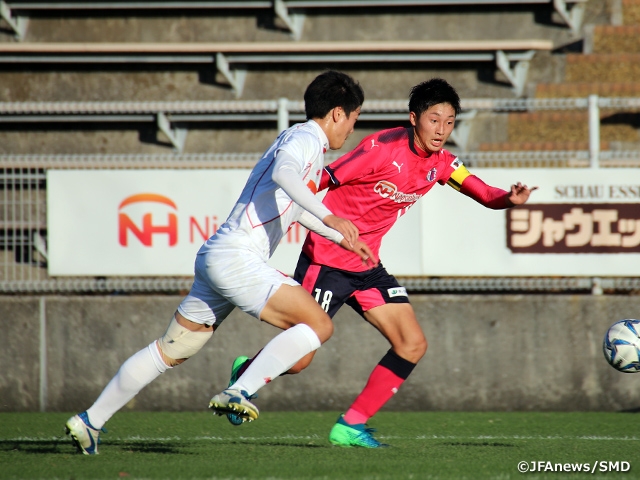 The 16th Sec. of the Prince Takamado Trophy JFA U-18 Football Premier League WEST was held between Friday 23 and Sunday 25 November, where Cerezo Osaka U-18 (Osaka) and Higashi Fukuoka High School (Fukuoka) squared off against each other.

In a match between two teams seeking to secure a higher standing in the league, Cerezo Osaka took the initiative against Higashi Fukuoka, as their forward FUJIO Shota (#18) described their approach, “Our style is to apply pressure from the start and try to score early in the match.” With 10 underclassmen featuring their starting line-up, the Osaka side showed no hesitation to apply pressure from the early minutes and build their momentum. In the 10th minute, TANIMOTO Shunsuke (#8) delivered a through ball to Fujio, who converted this opportunity to score the opening goal, later reflecting that “It went exactly the way we practiced.”

In the 16th minute, Higashi Fukuoka levelled the match when SHINODA Kensei (#10) connected with a corner kick, but Cerezo retook the lead just three minutes later when KONDO Kuraba (#32) capitalised the cross delivered by Tanimoto from the left flank. With 10 minutes left in the first half, Higashi Fukuoka rallied back to equalise the match once again. However, as Cerezo’s SHIMOKAWA Taiyo (#30) later described, “The go-ahead goal has given us the confidence to defend through,” the Osaka side showcased great persistence to keep their opponents from scoring a goal. The shot taken by IMOTO Kanji (#11) in the 45th minute was saved by the goalkeeper KANBAYASHI Go (#31) to keep Cerezo Osaka’s one goal lead into halftime. 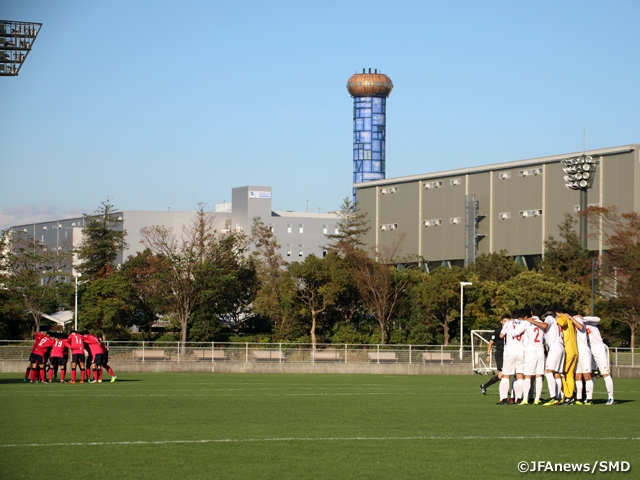 The second half saw the Fukuoka side take control of the match as they created opportunities against Cerezo who started to show signs of fatigue, as their defender NAKAMURA Takumi (#2) made continuous runs in the left flank to create chances. In the 47th minute, Nakamura’s pass gave AOKI Shunsuke (#39) a golden opportunity to score, but his attempt was blocked by the opposing defender. Another opportunity followed in the 54th minute by the same duo, but Aoki’s sliding effort came short from capturing the target. Cerezo Osaka was forced to be in the defending end for the remainder of the match, but as Shimokawa mentioned, “We sought for our opportunities to attack back while we played defence,” they kept anticipating to counter while showcasing persistent defence to keep their lead intact and finished the match with their one goal lead intact. 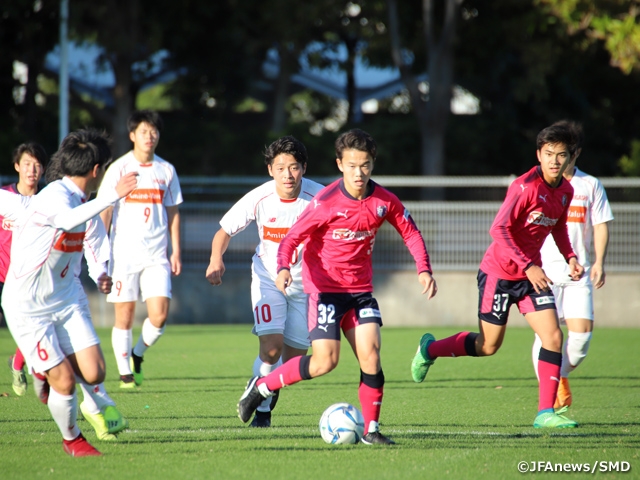 MURATA Kazuhiro, Coach (Cerezo Osaka U-18)
With the third-year players sitting on the bench, I told my players to go all out and play aggressive from the front line. I thought we played well in the first half, but we weren’t able to adjust to the changes made by the opposing defence line. It would have been better if we could have stayed mobile and add layers to our plays, but we kept on playing stationary. Although we were forced to play defensively in the second half, our players did well to understand what they lacked in the first half, so I am satisfied with their performance. The issues we saw today were characteristics of young players, and I feel like they were able to gain a precious experience that will help them become a better football player.

FW #18 FUJIO Shota (Cerezo Osaka U-18)
We managed to score two goals early in the match and build a favourable momentum. However, our opponents took control of the ball possession during the second half and we couldn’t play our game as much, but we still managed to stay patient and fight through as a team. We focused on anticipating for the right moments to make a move as a team, rather than giving out full efforts to chase down every single play. Despite conceding a goal, it was great to see the team working with persistence. Winning this match with many of the underclassmen has given us great confidence. We hope to win the remaining two matches to finish the league in a higher ranking.

MORISHIGE Junya, Coach (Higashi Fukuoka High School)
In today’s line-up, we utilised many players who hasn’t been able to play in our recent matches. They all managed to showcase their strong points, but at the same time, their weak points were also on display, so we must work to fix those aspects. The two goals we conceded in the first half is perhaps the biggest issue that we must address. Each and every player must focus and play well in order to stop the opponents from scoring a goal. We showed our inability to win the ball at crucial moments, and that is something we must improve on. The players created many opportunities in the second half, but still lacked quality in their final touches. Those plays in the final third was the difference in today’s match.

DF #4 NISHIDA Sho (Higashi Fukuoka High School)
This was our first Premier League match following the conclusion of the All Japan High School Soccer Tournament qualifiers, and we struggled to adjust to the speed showcased by the J. League academy team. We allowed our opponents to control the ball freely in the first half and failed to play defence collectively. In the scene where we conceded the goal, we didn’t communicate well with each other and couldn’t contain the opposing forward from making the run to the side. Although we managed to make the adjustments in the second half, we must do a better job in order to compete at the All Japan High School Soccer Tournament. We will work hard in our training sessions so that we can adjust to the quick ball movements showcased by the opponents, while increasing our percentage of ball possession in the match.

The match between the second place Gamba Osaka Youth (Osaka) and first place Kyoto Sanga F.C. U-18 (Kyoto) finished with a come from behind victory by Kyoto. Hannan University Senior High School (Osaka) who were desperate to earn three points in order to avoid relegation, conceded two goals in the second half to lose the match against Vissel Kobe U-18 (Hyogo). As a result, it has been determined that the Hannan side will be relegated from the Premier League next season. The match between Avispa Fukuoka U-18 (Fukuoka) and Nagoya Grampus U-18 (Aichi) ended with a 2-2 draw, while Sanfrecce Hiroshima F.C Youth (Hiroshima) defeated Yonago Kita High School (Tottori) with a score of 3-0.