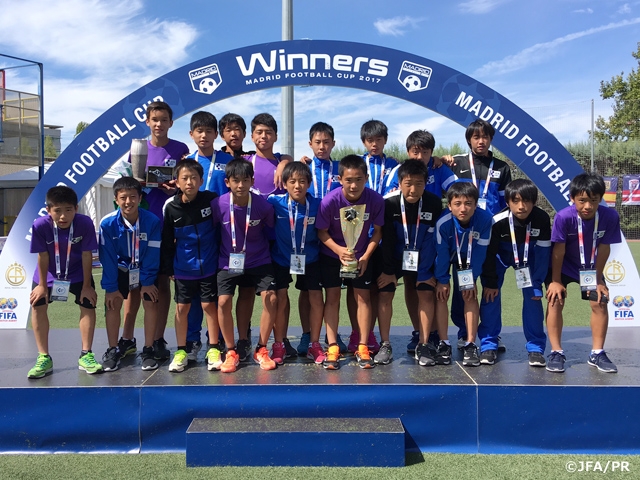 JFA Elite Programme U-13 held an overseas tour in Spain from Tuesday 12 to Sunday 17 September and their selection team participated in the U-13 Madrid Football Cup. During their stay, the squad had a total of 8 matches including practice games against the teams from USA, Denmark, Spain, France and Russia and ended with 5 wins, 1 loss and 2 draws.

In the U-13 Madrid Football Cup, 32 youth teams across Europe participated in the tournament and many prominent names in European football including Paris Saint-Germain, Werder Bremen, Juventus, Chelsea, Real Madrid and Atlético de Madrid entered the competition. These teams were divided into 8 groups of 4 teams in the first round and the top 2 teams from each group advanced to the knockout stage of the tournament.

JFA Elite Programme U-13 Selection Team earned 5 points and topped the group stage with 1 win and 2 draws and beat Real Madrid in the playoff tournament, but lost to Chertanovo Moscow in the semi-finals. The Japanese squad failed to break through the Russian defence and their opponents successfully hit on the counter to advance to the final, where they defeated Werder Bremen and became the crowned champions of the tournament. In the third-place match, Japan edged Atlético de Madrid 1-0 and finished third in the competition. In the award ceremony, NAGATA Mio (Kawasaki Frontale U-15) was named as the best goalkeeper of the Madrid Cup.

The next activity for the JFA Elite Programme U-13 is a domestic training camp in December. 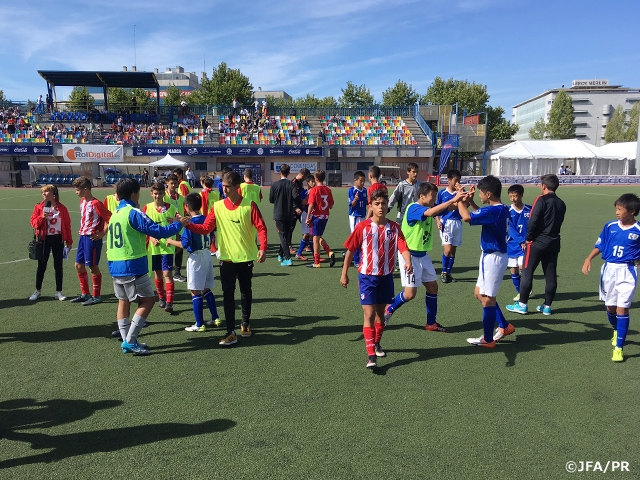 YAMAHASHI Takashi, Coach
We invited 18 players who had been recommended from different regions in Japan for the U-13 Madrid Football Cup. It was a chance for the players to have match experiences against foreign club teams. We tried to maintain our level of play from the domestic training camp where we worked on several areas including taking the initiative in both ends of the pitch by each player getting involved in the play, sharing and prioritising different plays in attacks, creating numerical advantage by supporting at a right distance and giving a passing lane to the teammate in possession of the ball, putting strong pressure on the opponents and stealing the ball, and closing down the space and robbing the ball by keeping the defence compact. Some of the squad members played in different positions from their club teams, but all of them paid close attention to the team’s concept and understood their roles in the team. We finished the competition in third place after beating Atlético de Madrid 1-0. Going through this tournament, I saw many positive changes in the players and I hope they will capitalise on this experience to become better footballers in the future.

NAGATA Mio (Kawasaki Frontale U-15)
We played matches of 20-minute halves in this competition and I learned that each play can make a difference. It was a wonderful learning experience, and I also learned how we should manage time after scoring or conceding an opening goal. In the group stage and playoff tournament, we played against major clubs including Paris Saint-Germain, Real Madrid and Atlético de Madrid in the third-place match. Beating these teams gave me confident to compete in the future competitions. As a team and also as a player, we learned many things from going through these matches against top teams in the world. We won several matches by overcoming many challenges, but we could not reach the final after losing to Chertanovo Moscow from Russia. There was an amazing forward player that we don’t have in our team, and he capitalised on a single chance to win the match. However, it was good to know that there is a wonderful striker in the world. In the third-place match, we displayed our competitive fighting spirit and secured a win. Personally, I received the Best Goalkeeper Award. It is still hard to believe, but I hope it proved to the world that there are fantastic footballers in Japan also.

Lastly, I would like to say that the team and I got good results, but couldn’t have done it without the support of the staff members and the local people. I am sincerely grateful for all the support and I will keep this mind as I continue to work hard and strive to become a national-team player of the top squad. By then, I hope we can compete evenly against the top teams in the world.

SUETANI Seigo (Cerezo Osaka West U-15)
In this overseas tour to Spain, I directly felt the level of football in the other part of the world, and it has given me a very precious experience that I wouldn’t have got it in Japan. We got through the group stage on the first day as a top team after giving our best as a united team. However, on that day, we could not communicate well with each other and were disorganised as well. On the second day, we played against a team from Denmark in the first match of the final tournament. We started early in the morning and it was cold, but we could still manage to pull off a win by finding a good rhythm with our consistent defence with high pressing from the beginning of the match. We then played against Real Madrid in the second match. We didn’t perform well in the first half, but gained momentum in the second as we started to play as one united team and got a win at the end. In the third match against a Russian team, we couldn’t keep our focus and lost the game. I believe the way we attacked when they retreated and defended was wrong. The same can occur in Japan, and we need to work on this area and improve ourselves to win future matches. I am glad that we got ourselves together before the third-place match and secured a win. This tour will be one of the cherished moments in my life, as I have gained many wonderful experiences that I never had them before. I will remember these experiences and capitalise on them for my future as well.

SAITO Yuzuki (Shimizu S-Pulse Junior Youth)
I am very glad that I could join the team for the overseas tour. I really learned a lot from this trip. When I arrived in Spain, my legs were stiff from the long journey and I couldn’t move swiftly. However, I was able to move without feeling any muscle strain in the matches after recovering my physical condition in the training sessions. It was also hard for me to sleep inside the airplane and recover from jetlag. From going through all of them, I was back in form to play and scored eight goals in the seven matches. I am disappointed that I couldn’t be the top scorer having one goal less than the Russian striker. We were beaten by the Russian team in the semi-final, but as an attacking player I scored goals against the three strong teams: Real Madrid, Atlético de Madrid, and Paris Saint-Germain. This would give me some confidence. At the same time, it was a good learning experience that I learned I wasn’t strong enough to compete against some of the centre halves who were physically taller and stronger as well as those who had better speed. After this competition, the national teams of different age groups will start their training to prepare for their World Cup tournaments. I will do my best to be selected for the national team and score plenty of goals to win the World Cup. 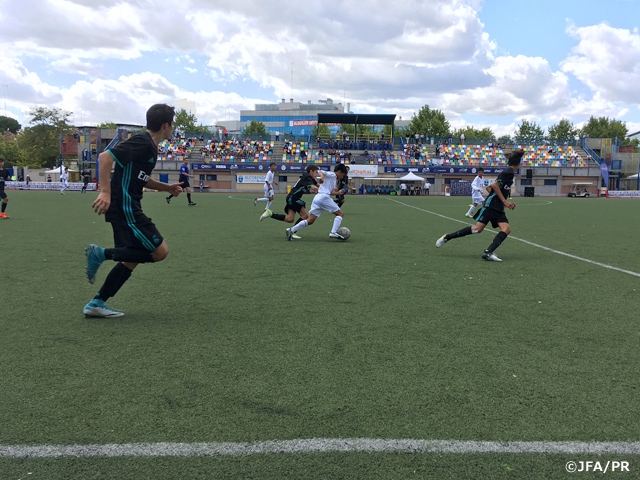 *Local time and date.
**The schedule is subject to change due to the team condition, the weather, etc.