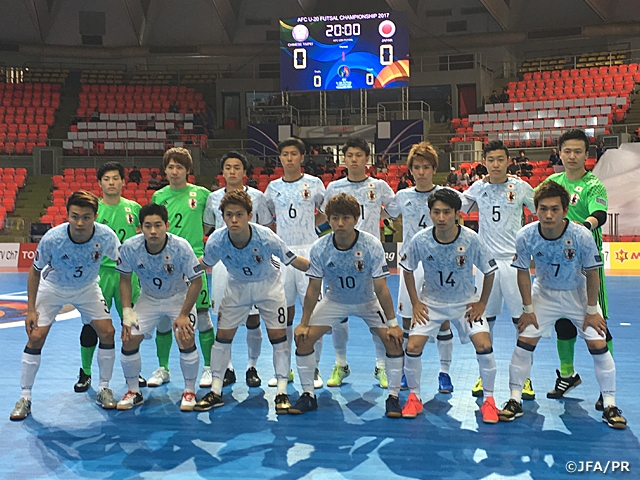 The U-20 Japan Futsal National Team played the first group stage match in the very first AFC U-20 Futsal Championship Thailand 2017 against Chinese Taipei on Wednesday 16 May.

Having some early game jitters in their tournament opener, Japan despite taking the initiative of the match failed to capitalise on their early chances and needed some time before they got used to the conditions and ball movements of the foreign court. However, in the 15th minute, after receiving the ball on the left, NAKAMURA Mitsuru surged up the court and cut inside to fire a right-footer into the back of the net to open the scoring and give his side a 1-0 lead to the break. 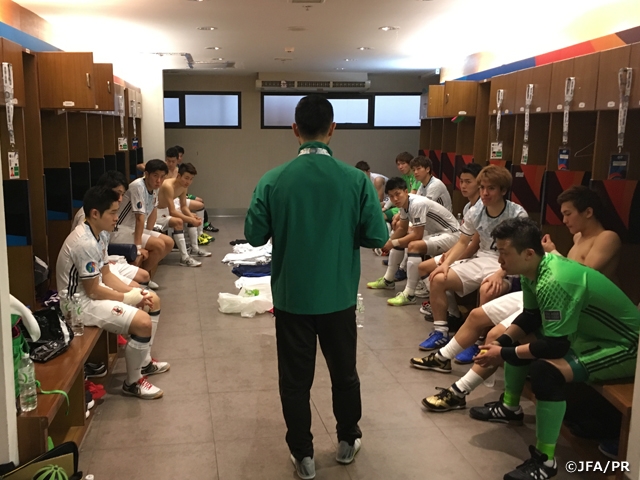 Coach SUZUKI Ryuji encouraged the players during halftime, ‘You haven’t been able to capitalise on the practices we went through. Think before you move and play as a team.’ Then, in 25th minute, after finding himself with the ball in front of the goal, SHIMIZU Kazuya dodged the challenge of the approaching defender coming from behind and swiftly turned away from the opposing goalkeeper to slot home a left-footer and doubled the lead for his squad.
.
Having the two-goal advantage, the Japanese squad found their composure and took firm control of the match with wonderful pass works. Subsequently, in the 34th minute, Shimizu scored directly from a free kick to give his side a three-goal cushion and, after 38 minutes, UEMATSU Koto reacted quickest to a loose ball off Nakamura’s shot and calmly slotted the ball into the net. Thereafter, Chinese Taipei created few scoring chances, but goalkeeper SAKA Keisuke led the team in defence to keep a clean sheet until the final whistle. The young Japanese squad succeeded in posting a 4-0 comprehensive victory in their very first official match.

The U-20 Japan Futsal National Team will play the second group stage match against Tajikistan on Thursday 18 May.

SUZUKI Ryuji, Coach
The first match is always difficult in any championship. However, my players made the necessary adjustments during the game and found their rhythm to secure their first win of the tournament with a clean sheet. I am certainly pleased with the win, but also aware that we need to refresh our mind and get ready for the next match against Tajikistan.

GK #1 SAKA Keisuke (ESPOLADA HOKKAIDO)
I am 'chuffed' that we won today’s game. It was important we found the opener when we were playing a little awkwardly at the beginning. We did a fine job keeping a clean sheet, but still failed to convert numerous scoring chances into goals. We will improve the accuracy of our shots and win the next match as well.

FP #8 ITO Keita (PESCADOLA MACHIDA ASPIRANTE)
We made our first game against Chinese Taipei difficult by failing to capitalise on our early scoring chances. However, I would consider keeping a clean sheet as a positive going forward and prepare for the coming three consecutive games starting the day after tomorrow. We’ll play as a united team to get through the group stage.

FP#11 SHIMIZU Kazuya (FUGADOR SUMIDA)
We were a bit tense entering the first half of our very first game. We, however, managed to fix our problems and perform much better in the second, and secured a convincing 4-0 win. Since our aim is to win the championship, we need to work on the tasks at hand and will do our best to reach the summit of the World Cup.