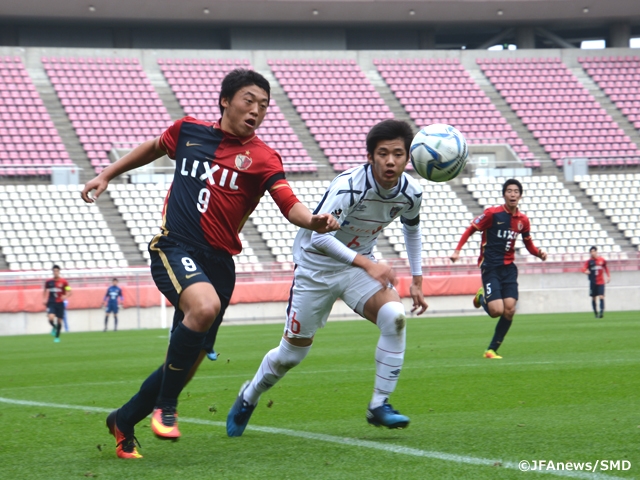 Matchday 17 of the Prince Takamado Trophy U-18 Premier League EAST was held on Saturday 3 and Sunday 4 December, and leaders F.C. Tokyo U-18 (Tokyo) met eighth-placed Kashima Antlers Youth (Ibaraki) at Kashima Soccer Stadium. Prior to the kick-off, the players, the staff, the referees, and the spectators observed a minute’s silence in order to commemorate the victims of the Colombian airline crash, in which the players and staff of the Brazilian team Chapecoense were killed.

Although Kashima had avoided relegation from the EAST since Albirex Niigata U-18 (Niigata) in ninth place lost their match the day before, the team initiated aggressive attacks from the beginning of their final home game. In the ninth minute, KANAZAWA Ren received a pass from the left to go close to the goal. After 20 minutes, SHINOZAKI Terukazu, who reacted to a cross from ISHIZU Hayato, took a shot with a header, only for it to hit the goalpost. 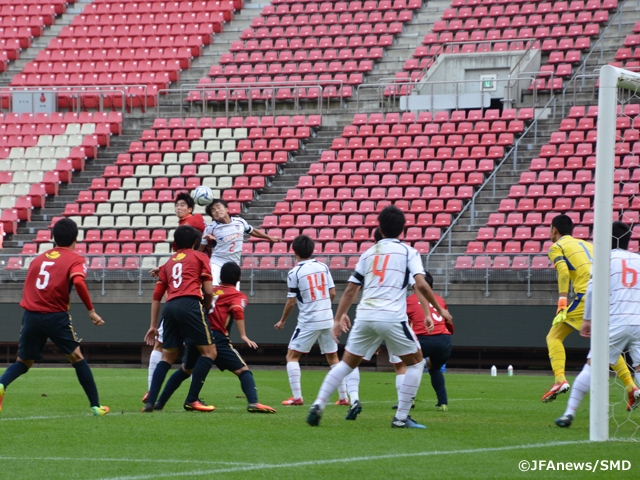 Although F.C. Tokyo started the game ‘awkwardly’ as coach SATO Kazuki later put it, SUZUKI Yoshitake, who had been playing for the F.C. Tokyo U-23 in the Meiji Yasuda J3 League, led the team in finding their rhythm. In the 27th minute, HIRAKAWA Rei initiated an attack that Suzuki finished with a strong shot. F.C. Tokyo gradually built the pressure on Kashima’s defenders.

In the contrast to the first half, F.C. Tokyo came out aggressively after the break. The team played deep in the opposing half by using long-distance balls to make the opponents’ defenders chase them, while exploiting limited space by connecting one-two passes and dribbling. Despite struggling against Kashima’s tenacious defence, F.C. Tokyo succeeded in scoring first in the 74th minute with a sharp cross from the left, which led to an own goal by the Kashima’s defender.

F.C. Tokyo were determined to score more goals after building a one-point lead, while Kashima, on the other hand, defended solidly waiting for an opportunity to counter attack. Kashima livened up their attacks by substituting players before the clock ran down and went close to F.C. Tokyo’s goal with long-distance balls. In injury time of the second half, after players of both teams competed to get to a throw-in ball from the right side, Shinozaki managed to trap a loose ball on his chest and fired a volley to score an equaliser.

Kashima, who managed to level the game at the last moment, kept the score until the final whistle to earn one point. The team grabbed one point in two consecutive games against the leading teams. (They drew with Aomori Yamada High School on the previous matchday.) As a result, F.C. Tokyo dropped to second place. The title of the EAST will be given to the winner of the game in the final week between F.C. Tokyo and Aomori Yamada High School.

KUMAGAI Koji, Coach (Kashima Antlers Youth)
Since we found out that we had avoided relegation the day before the game, I could have used the third graders in this match. However, we value every single game. So we decided to play our best team, while asking the players to give their 100% from the beginning of today’s game. We were hoping to take the initiative in the first half, and we did create goal-scoring opportunities. In the second half, we struggled and ended up conceding a goal, but the players never gave up and continued to fight until the end.

SHINOZAKI Terukazu (Kashima Antlers Youth)
Since F.C. Tokyo are the league leaders, we knew they were strong. Having said that, we have been preparing in order to win today’s game. We believed that we could get a positive result if we did what we needed to do. I’m glad that we earned a point and achieved our original aim from the start – to stay in the league. As I am the top scorer in the team, I am frankly happy that I scored in the end to level the match. It was great that we shared our happiness with the players on the bench.

SATO Kazuki, Coach (F.C. Tokyo U-18)
As Kashima played tenaciously from the beginning of the game displaying their strength on the ball, our players might have felt confused and we couldn’t start well. The players understood the importance of this match. I believe they felt nervous because of their enthusiasm for earning three points before the final matchday. Despite the result, a draw, I take it as a positive that we experienced this tough match. What’s vital for the players are two things - how they spend the final week in preparation and how they take this difficult situation.

HIRAKAWA Rei (F.C. Tokyo U-18)
Since we knew the opponents’ strategy, we were prepared to play patiently even though we couldn’t perform as we intended both offensively and defensively. I don’t think we initiated attacks aggressively or strung passes well enough to move forward. Personally, although I was trying to impact the game by reacting to loose balls, it didn’t work well. It was unlucky, rather than careless, that we conceded a goal just before the final whistle. 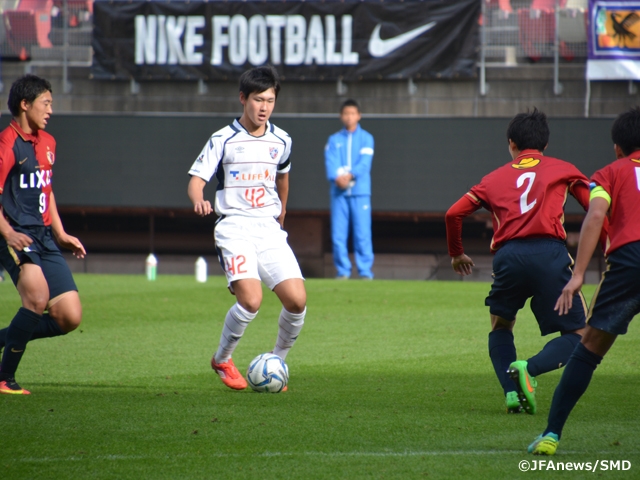 Omiya Ardija Youth (Saitama) in third place won a sweeping victory against Albirex Niigata U-18 (Niigata) 6-0 with a hat trick from OGASHIWA Tsuyoshi. Although they are seven points behind leaders Aomori Yamada on goal difference, the team kept their hope alive of a dramatic upset victory in the league. Niigata, on the other hand, will be relegated to the Prince League.