Matchday 16 of the Prince Takamado Trophy U-18 Premier League EAST was held on Sunday 27 November. Omiya Ardija Youth (Saitama) in fourth place, who have built up positive momentum by stretching their wining streak to three games, met Ichiritsu Funabashi High School (Chiba) in fifth place, who have not managed to win in the last three matches, at the Saitama Stadium 2002 Second Ground.

Omiya found their rhythm at the beginning of the match. The players used the full length of the pitch, while midfielder YAMADA Riku led the team to move the ball from side to side. They easily parried Ichiritsu Funabashi’s pace and pressure to move into the opponents’ area. In the 34th minute, OGASHIWA Tsuyoshi received a pass from forward OKUNUKI Kanji and ran towards the space behind the defender to take a shot unmarked, only for it to go wide. Since the team kept possession and took the initiative of the game, Yamada, who strung passes at the centre, later commented: ‘we displayed our playing style in the first half’.

Ichiritsu Funabashi struggled to steal the ball in the middle of the pitch. Although their defence up front did not function well in the first half, it had improved significantly in the second. After coach ASAOKA Ryuzo told the players to ‘reduce the distance between teammates’ during halftime, they used their physical advantage and managed to get to the opponents in possession of the ball by playing more compactly in the middle of the pitch.

They also overwhelmed the opponents in attack. Both defenders, SUGIYAMA Danto on the left and MASE Takumi on the right, moved the ball to the sides to send numerous crosses in order to create goal-scoring chances. The players also aimed directly towards the space behind the defenders. After 76 minutes, midfielder NISHIHA Taku, who received a pass from midfielder NOMOTO Kota, struck at goal brilliantly. However, his shot was superbly saved by Omiya’s goalkeeper MIYAZAKI Kotaro. Ichiritsu Funabashi took seven shots in the second half, while Omiya had none. 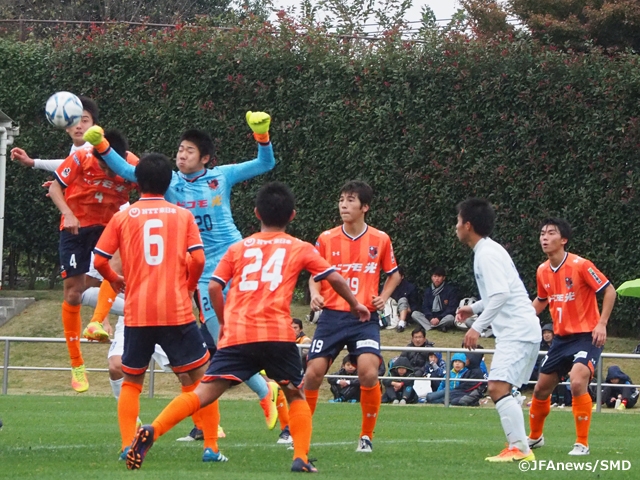 Although Ichiritsu Funabashi completely took control in the second half, they could not score due to a lack of accuracy in crosses and shots. At the full-time whistle, the eleven players in white kit looked up at the sky with desperate expressions on their faces. Captain and defender SUGIOKA Daiki commented with regret: ‘we should have won the game’.

Despite the same result for both teams, the expressions of both coaches were at the opposite end of the spectrum. OTSUKA Shinji, the coach of Omiya, pointed out their problems in not being able to score, but was relieved that the team ‘managed to keep a clean sheet’. ASAOKA Ryuzo, on the other hand, noted with frustration: ‘it’s our sixth draw. We cannot win a game.’ 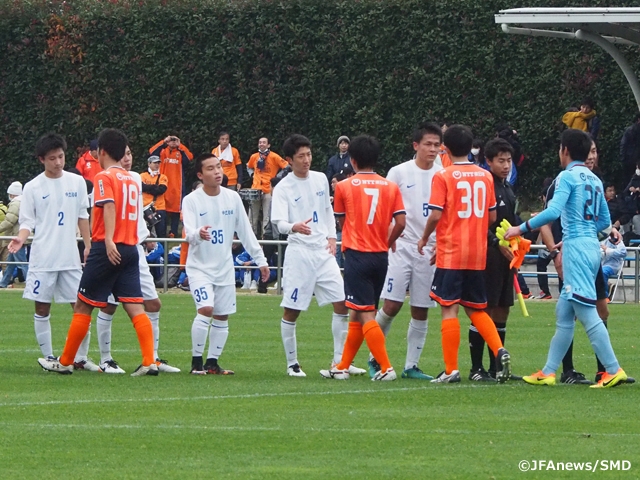 OTSUKA Shinji, Coach (Omiya Ardija Youth)
Although I did not want a draw, I must admit that the players worked hard. I believe they defended well against Ichiritsu Funabashi’s tough attacks. They also managed well against the opponents’ strength in set pieces; they did not let the opponents score from corner kicks or long-distance throws. I’d like to point out that each player performed well, while defending in their zone. Our problem was not being able to score. It was a shame, as we did have goal-scoring opportunities in the first half.

YAMADA Riku (Omiya Ardija Youth)
We displayed our playing style in the first half, but let the opponents press us in the second half. Having said that, keeping a clean sheet until the final whistle meant a lot to us. The opponents were strong and they had the momentum of the match. Since the battle for the ball mainly took place in the middle of the field, how to avoid the pressure there was the key to the game. However, their pressure was much stronger than expected. We must keep winning in order to be the top team of EAST. I’m determined to play in the Championship.

ASAOKA Ryuzo, Coach (Ichiritsu Funabashi High School)
Struggling to score is our continuous problem. Although we did created goal-scoring opportunities from our strength – attacks from the side - neither the accuracy of crosses nor the way we cut into the centre was good enough. We were one step away from the goal. Since the opponents had made us run in the first half, I didn’t expect the players’ stamina would last in the second half. The players managed to steal the ball, though. By reducing the distance between the forwards and the defensive line, the players were able to coordinate the plays better. Having said that, we cannot win a game without scoring.

SUGIYAMA Danto (Ichiritsu Funabashi High School)
We should have won the game. We found our tasks – we must score from our opportunities. Since we heard that Aomori Yamada High School lost their match, we were determined to win this game. What we need now is to win all the remaining matches from now on. We have been working on defence, which we did well, stealing the ball in a good way. I’d like to practice hard defending against the opponents to become even stronger. We’d like to show people that we can overcome our weaknesses.

Shimizu S-pulse Youth (Shizuoka) scored one in the first half and the other in the second half to beat Kashiwa Reysol U-18 (Chiba).

SUDO Tsubasa of Kashima Antlers Youth (Ibaraki) struck a deciding goal in the 63rd minute and won an away game against Aomori Yamada High School (Aomori).

F.C. Tokyo U-18 (Tokyo) in second place scored three goals, starting with OIJI Yoshiatsu’s opener, to win a sweeping victory over Yokohama F・Marinos Youth (Kanagawa). As a result, F.C. Tokyo are now in the lead, since Aomori Yamada High School lost a game at another site.