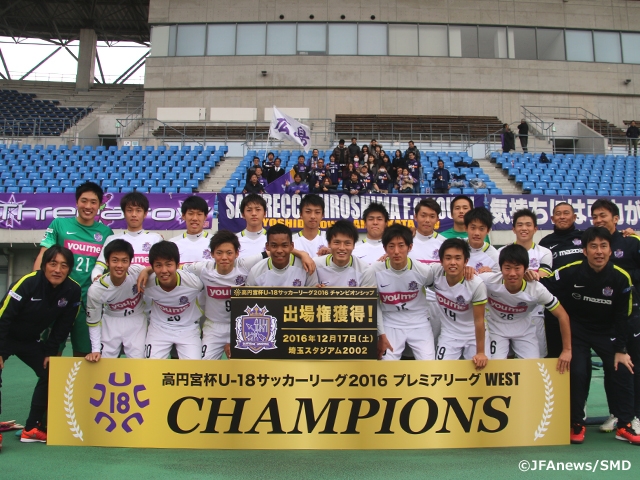 Matchday 17 of the Prince Takamado Trophy U-18 Premier League WEST was held on Saturday 3 and Sunday 4 December, and Kobe Koryo Gakuen High School (Hyogo) played against Sanfrecce Hiroshima FC Youth (Hiroshima). Prior to the kick-off, the players, the staff, and the spectators observed a silent prayer in order to commemorate the victims of Colombian airline crash, in which the Brazilian Chapecoense players and staff were killed.

Hiroshima, who were to earn the WEST title if they won or drew their game, took the initiative at the beginning of the match. After the team put pressure on Kobe Koryo by passing the ball swiftly, YAMANE Towa, who ran towards the goal, struck the opener in the 15th minute. After 21st minutes, as KAWAI Ayumu later commented: ‘as soon as I got the ball, I aimed to attack vertically’, he broke through the defence on the right side to send in a cross towards the front of the goal, where Yamane rose to plunge home a towering header to stretch their lead to two goals. 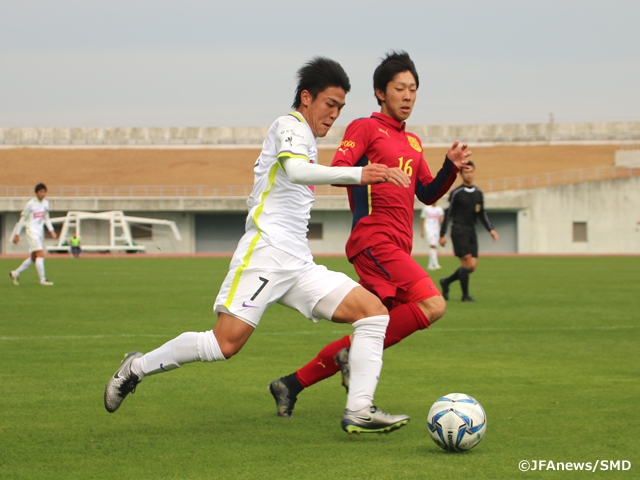 Although Hiroshima started well and built a two-goal lead, they struggled against Kobe Koryo’s counter-attacks. Coach SAWADA Kentaro noted: ‘the players became unnecessarily nervous about the space behind defenders, which gave the opponents some opportunities’. Kobe Koryo earned several corner kicks at the end of the first half. In the first minute of injury time, TANIGO Hiroto scored on a volley to close the gap to one goal, just like he planned stating ‘since Hiroshima’s goalkeeper is excellent at reacting to high balls, I intended to receive a pass on the near side’. 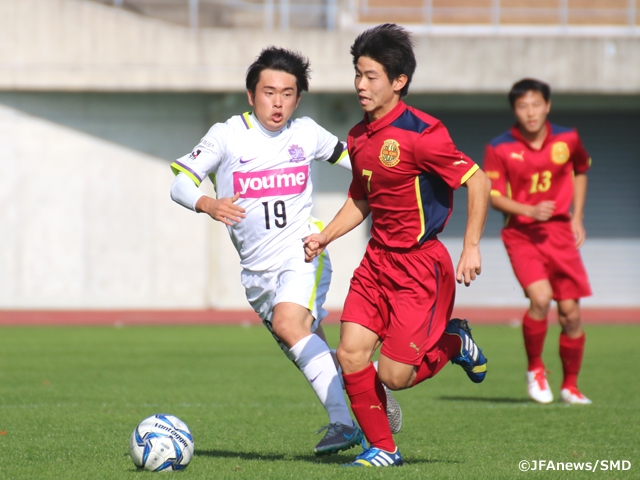 The momentum might have shifted towards the opponents by conceding the last-minute goal in the first half, but it was Hiroshima who came out aggressively and took the early control after the break. In the 47th minute, Yamane managed to score a hat trick from a penalty kick and stretched their lead once again.

Although Kobe Koryo made some replacements to strengthen their attack and threaten the opponents’ goal, Hiroshima’s captain IYOHA Osamu Henry led the team to focus on defence and they did not allow the opponents to score any more. After 85 minutes, Hiroshima created another goal-scoring opportunity. Yamane, who reacted to a loose ball from a right cross, slotted his fourth goal into the net. The score stayed the same until the final whistle and Hiroshima won the match 4-1 to clinch the Premier League WEST title for the third time.

TANI Junichi, Coach (Kobe Koryo Gakuen High School)
We played with five defenders at the back in order to earn one point. As we didn’t expect to keep a clean sheet, we were always looking for goal-scoring opportunities while preparing to spend a lot of time in defence. Although it was a shame to concede two goals at the beginning of the first half, TAKEMURA Fumiaki created our opportunities and we managed to score from a set piece just before halftime. We expected to draw the game by solidly defending the first 10 minutes of the second half. However, conceding from a penalty impacted the match.

TANIGO Hiroto (Kobe Koryo Gakuen High School)
Although we closed the gap to one goal just before halftime and faced the second half with high spirit, we conceded a goal in a careless way right after the break. We gave a penalty kick away due to handball, which couldn’t have been avoided, but we should have played more carefully as a team. Since we failed to book a place in the All Japan High School Soccer Tournament, the next game against Oita Trinita U-18 will be the last match in high school for the third graders. So we’d wanted to win the match in order to stay in the League.

SAWADA Kentaro (Sanfrecce Hiroshima FC Youth)
We had a difficult time in the first half, during which we conceded a goal when we should have scored our third. However, we reacted well against Kobe Koryo’s defence and controlled the game excellently in the second half. As we have been the league leaders for a while, we were eager to win the Trophy to book a place in the Championship. I’m really pleased and relieved at the same time that we earned the title. In the Championship game, we will give all we have and challenge the opponents.

KAWAI Ayumu (Sanfrecce Hiroshima FC Youth)
We only needed a draw to win the championship. However, we were focused on displaying Hiroshima’s football style, just as we had discussed ‘playing every one of the 18 matches in the Premier League in the same spirit’. Winning games in the latter half of the league brought us more confidence. I am pleased, but feel relieved to win the Premier League WEST. Having said that, we still have a game against Cerezo Osaka on the final matchday. I’d like to continue with the same attitude next week and prepare ourselves for the Championship.

Oita Trinita U-18 (Oita) lost the ‘Kyushu derby’ to Higashi Fukuoka High School (Fukuoka) at the end by conceding two goals in the second half after TODAKA Kota’s opener in the 24th minute. As a result, Oita’s relegation has been decided before the final matdhday.

Vissel Kobe U-18 (Hyogo) played an away game against Ozu High School (Kumamoto). Vissel Kobe once let Ozu turn the match around, but scored four goals after 70 minutes to earn a victory.