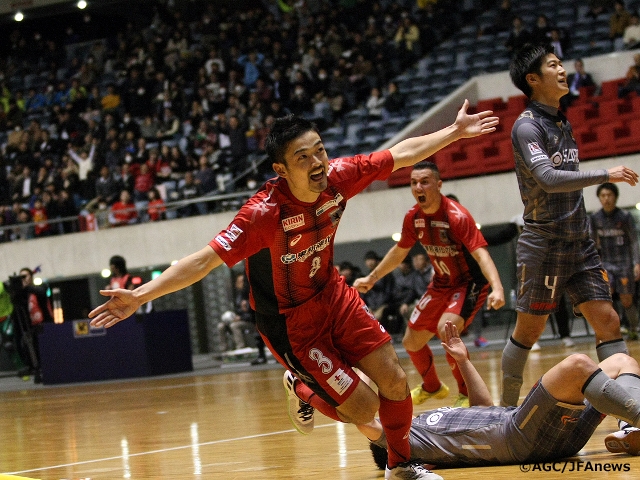 The semi final matches of the 21st All Japan Futsal Championship took place at National Yoyogi 1st Gymnasium in Tokyo on 12 March, and Pescadola Machida and Nagoya Oceans will face play in the final.

The first semi final match was between Fuchu Athletic F.C. and Pescadola Machida. Just as in the previous day’s match, Machida played carefully at the beginning, to inspect their opponents. In the 8th minute, Fuchu got a free kick on the left wing, and YAMADA Rafael Yugo fired a direct shot at Machida’s goal and scored. Machida then started applying pressure but they couldn’t equalise in the 1st half.

In the 2nd half, Machida’s KANAYAMA Yuhki passed the ball from the right wing to the front of the goal in the 26th minute, and NAKAI Kensuke jumped in to catch the ball. He was once blocked by the Fuchu’s goalkeeper but he kept attacking the goal until he successfully equalised. The mood of the match changed. In the 29th minute, Machida’s HONDA Marcos stole the ball in the Fuchu’s area and scored the team’s second goal. Then in the 30th minute, SHINOZAKI Ryuki got another goal with the similar approach as the previous goal. Machida extended its lead. Fuchu tried to make chances with their power-play from 35th minute, but they couldn’t break through the Machida’s firm defense. The match ended. Machida qualified for the final for the first time since they got it in to the F. League.

The second semi final was between Bardral Urayasu and Nagoya Oceans. The match was very intensive and it continued until extended time unlike any other matches of this competition. The team who broke the deadlock was Urayasu. In the 2nd minute, HOSHI Shota scored the opener, then in the 10th minute KATO Ryuma broke through the left wing and passed the ball to OHASHI Yuta in front of the goal, and he successfully scored the team’s second goal. Nagoya, on the other hand, scored a goal by Ximbinha after the kick in from the left side in the 11th minute. After this goal in the 17th minute, Urayasu’s FUKATSU Kosuke broke through an intensive competition and hit a well-aimed shot. The ball found the net successfully and Urayasu were 2 goals ahead again. Right after this goal, in the 18th minute, Nagoya’s Ximbinha scored a skillful goal. The 1st half ended with Nagoya 1 goal behind.

Nagoya tried to make good chances by moving the ball around carefully whereas Urayasu attempted to defend the goal by putting their bodies in the way of the ball. The match of these teams became even more intensive, trying to get one goal. In the 33rd minute, Nagoya got the free kick in front of the goal, and MORIOKA Kaoru’s shot sharply found the net. The score was now 3-3. The match with strong competition continued in to extended time for the first time in this championship.

The attack which decided the match came at the end of the extended time; it seemed to be going to a penalty shoot out. 50 seconds before the end, Nagoya’s Ximbinha made a shot in front of the goal first, then KITAHARA Wataru kicked the blocked ball back to the net; it was the precious goal. As a result, Nagoya got through to the final for the 4th consecutive time. 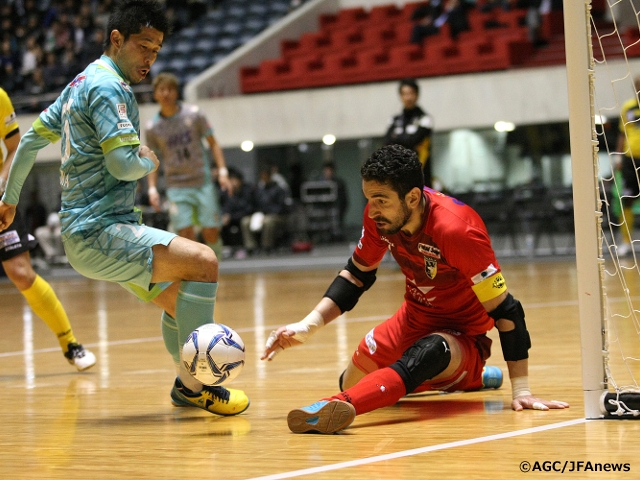 OKAYAMA Kosuke, Coach (Pescadola Machida)
They didn’t make a good move very much because they couldn’t get a rhythm in the 1st half, but they could equalise at a good time when they were competing equally in the 2nd half. After that, our crucial defenders functioned well and we could get 2 more goals as we wanted. It was a big thing that we had played against Fuchu at a playoff; we wanted to get a revenge for the defeat at that time. Nagoya is a strong team but we don’t particularly change our approach. It will be a difficult one, but I think we can do a good match considering how we get united well.

NAKAI Kensuke (Pescadola Machida)
When I scored a goal jumping into the goal was exactly what I was aiming to do. It was blocked by the goalkeeper, but I just pushed it back with a strong will. While we couldn’t break the opponents, we encouraged each other by saying that we would turn up the tempo and show off our advantages from the bench. We could change the flow of the match well with the equaliser. In the final, we want to maximise what we can do; in defense, we’ll be aggressive, and in offense we just carry on going ahead. Personally, I will do what I usually do very well in the final.

Ximbinha (Nagoya Oceans)
It was a hard match. Like the quarter final, we were behind at first 0-2, but then we equalised and finally we came from behind by Kitahara’s goal. It’s a relief. I think we all could play with calm mind, believing that we would win if we wouldn’t give up, and in fact I feel confident that we could win from behind. Machida is a high level team with good skillful players such as a goalkeeper Higor. It can be a tough match but we will concentrate more on the finishing moments to score without any exception.

TAKAHASHI Kensuke (Bardral Urayasu)
We could keep playing firmly getting united well. In detail, our opponents were better. For us, it can be a positive defeat which will be beneficial for our next step. I can’t play for a long time considering my condition, so I paid attention to what I had to do in the given condition. It would have been the best if we could finish this competition by getting to the final, but we could come up to here by doing our best, and I appreciate my teammates for bringing me to another match tomorrow. It will be my last match, so I want to finish with a victory. 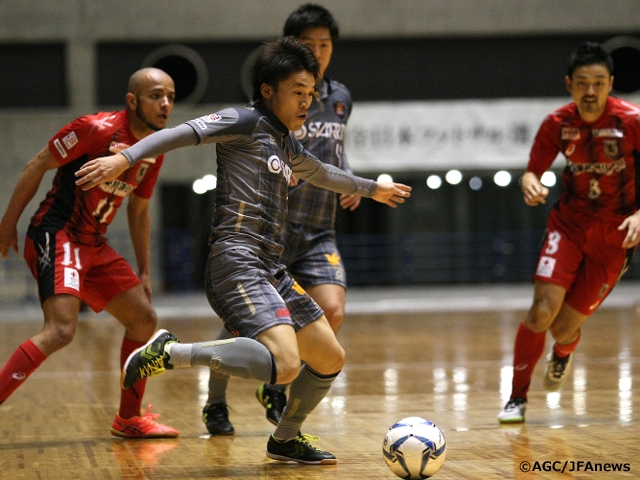