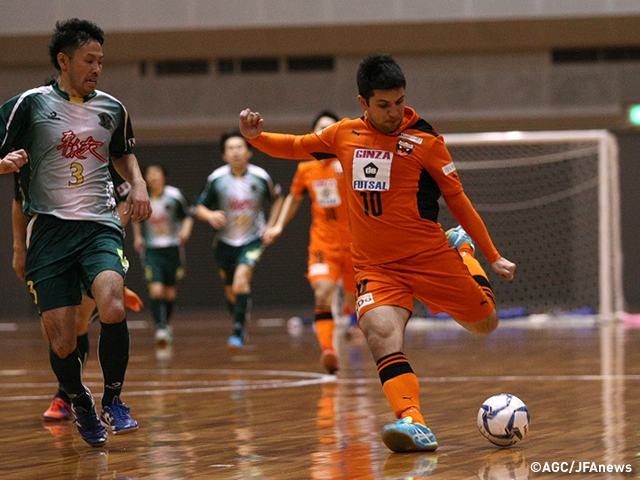 The second day of the 21st All-Japan Futsal Championship first round was held on 5 March.

In the first game at Osaka/Fumin Kyosai Super Arena, SWH Futsal Club (Kansai 1), who took a loss on the previous day, and Voscuore Sendai Satellite (Tohoku) faced against each other.

The loss would mean the elimination from the tournament for both teams, so the two sides displayed a hard-fought battles, but SWH entered halftime up 2-1. SWH added another early in the second half to have the pace, and extended the lead with a consecutive goal by TAKEISHI Takahiro on the 28th minute. Sendai Satellite scored two goals from power plays to cut their deficit to 3-5. But they allowed two goals from power plays and SWH wound up taking the contest 7-3. Takeishi showcased a spectacular performance as he racked up four goals for SWH.

In the second game of the day, Fuchu Athletic F.C. (F League) took on Member Of The Gang (Tokai 2). Gang came in the game with a momentum from their victory on the previous day. But they fell behind 0-4 in the first half and had to attack on power plays from past the 25th minute. Yet they kept allowing goals to the opponents and ended up being crushed 0-10 by Fuchu in the end. In Group C, Fuchu, SWH and Gang have the possibility to qualify through the group stage, but Fuchu will have an edge in goal differential when the three teams are tied with six points. 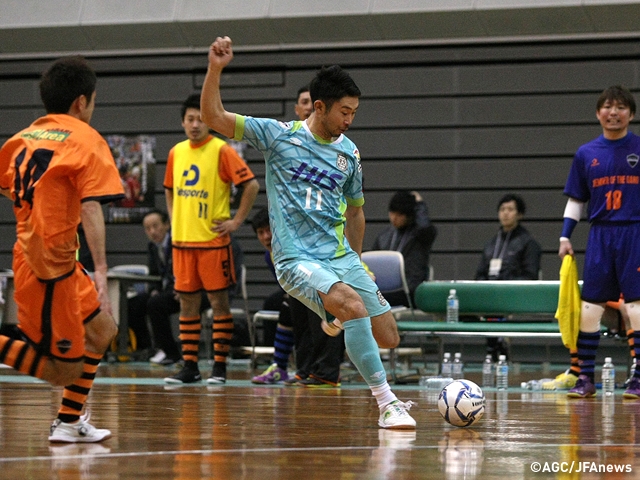 In the third game, Shonan Bellmare (F League) and Ligare Tokyo (Kanto 3) squared off against each other in Group D. Both put up aggressive attacks from the first half, but Shonan had a 3-2 lead at halftime. In the second half, OKAMURA Kohei, who received a pass in the middle, nailed a powerful turnaround shot to give Shonan a two-goal lead, and then Ligare started to rally from past the 36th minute with a power play. But Ligare were unable to create decisive chances while they gave up two more goals as Shonan won for the second game in a row with a 6-2 victory.

In the fourth game, Shriker Osaka (F League) faced D.C. Asahikawa FC (Hokkaido). Asahikawa took a lead when ISHII Shota scored on 6th minute, but Osaka had the initiative of the game afterwards and entered halftime up 2-1. Osaka wound up showcasing their offensive power as a top F League club and earned an 8-1 win showering a total of 62 shots on Asahikawa. Through the games, Shonan and Osaka are tied with two consecutive wins. The two will vie for the first place in a head-to-head match on the final day of the first round.

Other teams are playing tough battles in other groups as well. In Group E, Bardral Urayasu (F League) are the only team with two consecutive wins and have already clinched a final round berth in the second day. In Group B, three teams are tied in points, yet Espolada Hokkaido (F League) are ahead in goal differential.

Fugador Sumida (F League) and Tokushima Rapaz (Shikoku) in Group A, and Deucao Kobe (F League) and Vasagey Oita (F League) have posted consecutive wins, and will play head-to-head games on the final day with the final round berths at stake.

The final day of the first round will be held on 6 March, and the tournament will have all the final round-advancing clubs.

TAKEISHI Takahiro (SWH Futsal Club)
Our team hasn't played well since last week's regional champions league, but it feels great that we were able to finish on top this game. We almost didn't have any games that we would get behind and when we had a situation like that, we couldn't really rally back. Regional teams can't win against F League clubs in terms of conditioning, but we are practicing trying to making that up with our passing and beat F League clubs. While we might come up short conditioning-wise, we feel that we can compete technically-wise, so we want to definitely win tomorrow.

KUSAKA Takao (Member Of The Gang)
When we had our deficit wider, we tried to score from the power play, but failed to find a way to beat their defenders and score a goal. We got completely beaten physically, and it gave us hard times playing. Also, we had gaps with them in terms of each player's skills and set pieces. In this tournament, we came in trying to qualify through the group stage putting up what we've piled up this past year, so it's disappointing that we ended up losing badly and our chances to do so has become small. We will aim to win more than anything tomorrow, performing a game so we can display good things of our team.

OKANO Ken (Ligare Tokyo)
We had won in the Kanto league, and have trained to beat F League teams in this stage. Especially, Shonan are a team who gave me an opportunity to play until last year, so I was determined to bring a win for our team by me scoring a goal. I'm frustrated that we came up short. We had some rally and a chance to win, but lost goals from mistakes that we would like to take back. We couldn't qualify through the group stage, but there's no way we want to take the third straight loss and with the pride of Kanto, we would like to play at our full strengths and go home with a win in the end.

ISHII Shota (D.C Asahikawa FC)
We played in a way we would plan to early, but the differences in the individual ability made the difference. We came here with a goal to qualify through the first round this tournament, but we felt that the level of the game was higher that we couldn't have in Hokkaido. We are facing Ligare Tokyo were the runnerups in the regional champions league, so we would like to have measures to compete against them on par. I've had some jitters in these last two games, but this will be our last game in the tournament, so as the Hokkaido representatives, we will look to post a win while we exhibit what we've done in the past year and are having fun.