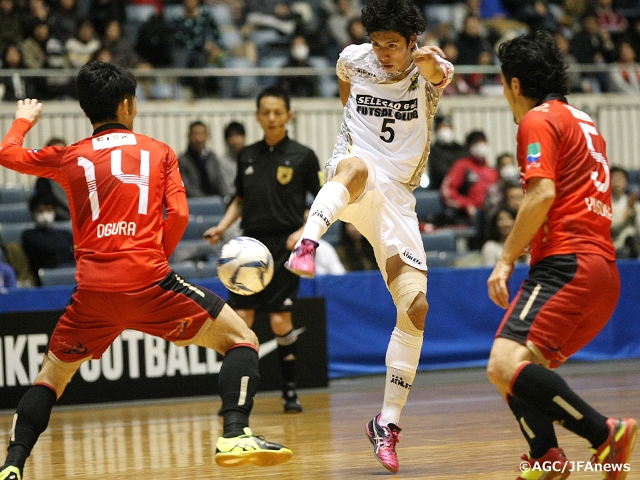 The quarterfinals of the 21st All Japan Futsal Championship were held on Friday 11 March at the National Yoyogi Stadium First Gymnasium. Eight teams, namely the six teams, who got through the first round, along with the winners of the F. League, Nagoya Oceans, and the second-placed Pescadola Machida, played the knockout stage.

It was a dramatic first game of the quarterfinals between Fuchu Athletic F.C. and Shriker Osaka. Fuchu focused on defence against Osaka, who kept possession well. In the 11th minute, KAMIFUKUMOTO Shunya received a pass on the right from YAMADA Rafael Yugo in the centre, and struck the opener.

In the second half, after 23 minutes, KANYAMA Tetsuichi, who got through the right wing, passed the ball towards in front of the goal, where MITSUI Takeshi slid in to score another goal for Fuchu. Osaka were eager to close the gap, throwing everything into attack from the 35th minute. Then after 38 minutes, the team attacked back with OSODO Nobuya’s goal. In the 39th minute, MORI Shuta also scored a goal to level the game. Just 14 seconds before the final whistle, Osaka were focusing on attacking in order to turn the match around. However, the goalkeeper of Fuchu kicked the ball into a non-guarded goal, deciding the match in the last two second. Fuchu reached the semi-finalist. 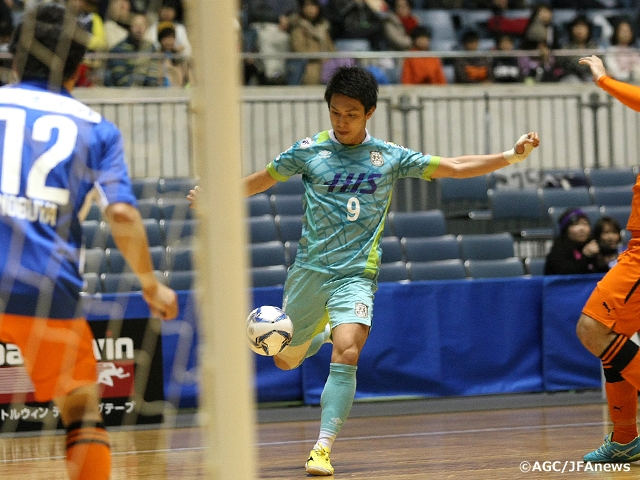 Bardral Urayasu met Deucao Kobe for the second match of the quarterfinals. Prior to the game, at the very moment the Great East Japan Earthquake occurred on 11 March 2011, the players, staff, and all the spectators observed a moment of silence for the disaster victims. Although the match went down to the wire with aggressive attack and defence from both teams, Urayasu, who sustained their one-goal lead, won the game 2-1.

The third game of the quarterfinals was between Fugador Sumida and Pescadola Machida. Though both teams created numerous goal-scoring opportunities, neither could find the back of the net against the opponent’s solid, physical defence. In the second half, after 11 seconds, however, Machida intercepted the ball on the right side, and KANAYAMA Yuhki in the centre struck the opener.

In the second minute, NAKAI Kensuke added insurance to build Machida’s lead. Although Sumida closed the gap to one goal after 29 minutes with FUTOMI Hisato’s shot, Kanayama reacted to the goalkeeper HIGOR’s throw to score Machida’s third goal in the 30th minute, take the score to 3-1. Sumida threw everything into attack to look for more goals, but Machida stayed focused to defend solidly until the last whistle. Machida had reached the semi-finals three years in a row.

Espolada Hokkaido played against Nagoya Oceans in the fourth game of the quarterfinals. Hokkaido attacked with a momentum built through winning the first round, and TOGAWA Yuki scored two consecutive goals in the fourth and sixth minute, establishing a two-goal lead.

Nagoya, however, levelled the game with MORIOKA Kaoru’s two strong, consecutive shots in the 14th and 15th minute. After 16 minutes, Ximbinha from Nagoya scored a goal to turn the match around before halftime. Despite pressure from Hokkaido, they could not find the back of the net. Then Ximbinha struck another goal in the last 36 seconds to decide the game. Nagoya booked a place in the semi-final to aim to become back-to-back champions in four consecutive championships.

Saturday 12 March will see who will emerge as finalists from the final four. Please come to the host site and see exciting games.

TANIMOTO Shunsuke, Coach (Fuchu Athletic F.C.)
Prior to the game, I told the players: "stay calm and avoid conceding a goal, even if we start to play awkwardly, and we can then pick up pace." The match went as I expected. We’ve been winning this season. We could defend effectively in one-shot deal. To raise the level of the team, we’re seriously aiming to claim the title, rather than hoping to become the champions only if it’s possible. We’ll play as a united team and win the championship, which will be the second this season.

KOGURE Kenichirou, Coach (Shriker Osaka)
Despite numerous goal-scoring opportunities, we couldn’t score. I believe the players performed better than the opponent, but let them strike goals through counter-attacks and their limited opportunities. It was a tough movement of the game for Osaka. However, I’d like to point out that we levelled the game in difficult circumstances. I think we showed our aggressive attitude. As there are some players, who will retire after this championship, I wish we could have played together a little longer.

KANAYAMA Yuhki (Pescadola Machida)
This championship has a long history, and today is Friday 11 March, just like five years ago. This tournament makes me think what I should do in everyday life, which is very important. In terms of the game, despite difficulties in the first match, it was great that we struck the third goal when the score was 2-1. As we failed to become semi-finalists in the past two championships, we aim to book a place in the final this time. We’ll play hard in the next match, so that we can claim the title for the first time.

KANAGAWA Takeshi (Fugador Sumida)
In a match, it is win or lose, and so I have to accept defeat. I believe the opponent’s spirit was stronger than ours. As I’ll "graduate" from the top team after this championship, I regret that in the end I couldn’t achieve what the coach SUGA requested. I’ll become a coach of the subordinate club team, while playing as well, and aim to register in the top league with younger players that have hope for the future. I’d like to improve myself with them. I cannot thank my coach and our fans enough. I’d like to contribute to my club team in order to nurture good players in the future. 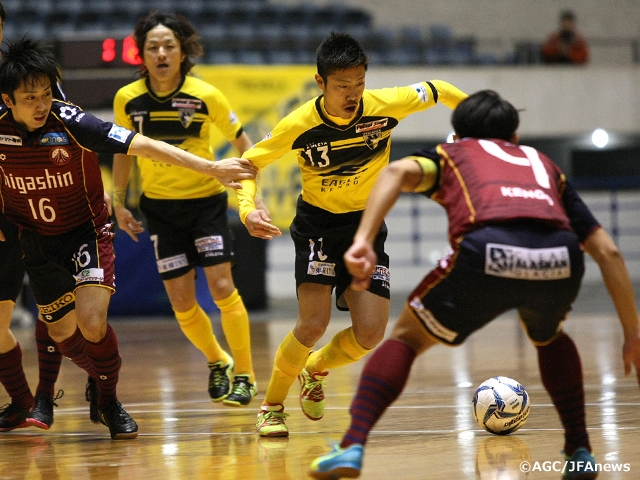