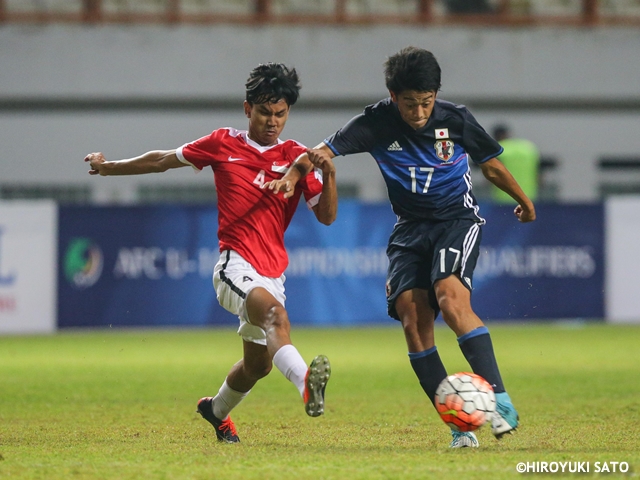 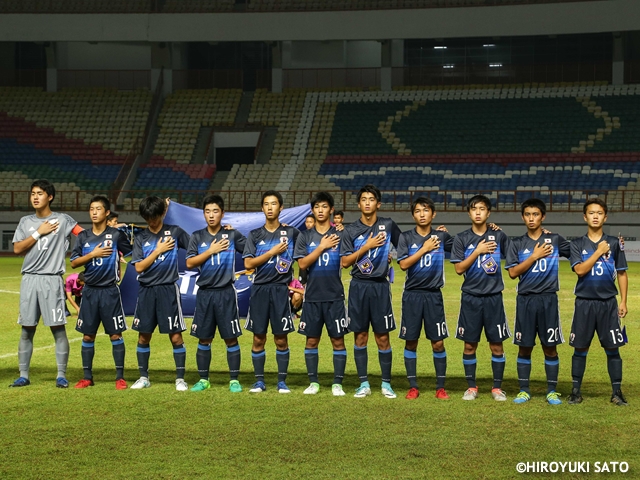 On Friday 22 September, U-15 Japan National Team faced Singapore in the second match of the AFC U-16 Championship 2018 Qualifiers and pulled off a comprehensive 11-0 over the South East Asian squad.

As anticipated, Singapore stayed back and created defensive blocks from the beginning of the match as they focused their efforts in defence and looked for their chances to hit on the counter. On the other hand, Japan dominated possession and connected passes in midfield, while they searched for open areas that can be exploited to threaten the opponents’ goal. The deadlock was soon broken in the 7th minute, when forward KOSHIO Genki put strong pressure on the opposing defender and robbed the ball to create a chance for midfielder ARAKI Ryotaro, who fired home the first goal for the Japanese side.

Even after conceding a goal, Singapore did not change their game plan and attempted to neutralise the menacing attacks from the Japanese side by placing their defenders deep in their own end. Japan had the initiative and created few chances to score from range, but were unable to fashion decisive scoring opportunities to extend their lead for some period of time. However, the young Samurai squad found a gap in Singaporean defence and doubled the advantage in the 24th minute, when Koshio struck home a low cross ball from the right side by midfielder NARUOKA Hikaru.

The game started to look one-sided after 38th minutes, when AOKI Yusuke collected a ball inside the box and fired in a third for the Japanese team, and was taken out of the reach for the South East Asian counterparts when Naruoka and midfielder KONDO Kuraba each scored just before halftime to put their side ahead by five goals.

During the break, Japanese coach ARIMA Kenji demanded his players, ‘Keep up the hard word. Immediately after someone sends a long pass or raises the tempo of play, I want to see everyone move swiftly and get involved in the play. Don’t think about conserving your energy to play for the full 90 minutes. We made our best possible preparations. Now go out there and give everything you’ve got.’ 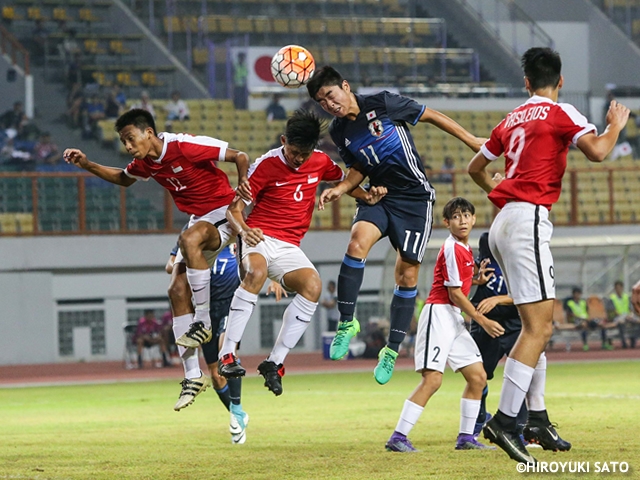 The second half started with Japan dominating possession and creating plenty of scoring chances. The first goal after the break for the young Samurai warriors came in the 48th minute, when midfielder NISHIKAWA Jun found the back of the net from a tight angle on the right side. Gaining further momentum, Aoki netted the seventh moments later and eighth on 62 minutes after Koshio cushioned the long ball inside the box for the Japanese striker.

Goal scoring fiesta continued for the Japanese internationals as substitute midfielder AOSHIMA Kenta collected the ball inside the box and made a swift turn to strike home the ninth goal for his side in the 74th minute and Araki’s effort from 20 yards out was deflected into the net on 33 minutes. It was nobody else but forward NAKANO Keita who put the final icing of the cake with a converted penalty in the closing minutes of the match, before Japan pulled off a stunning 11-0 victory over Singapore in their second match of the AFC Qualifiers.

U-15 Japan National Team will resume training on Saturday 23 and make a final preparation to square off against Malaysia in the important final match of the qualifiers that decide who quality for the AFC Championship on Sunday 24.

DF #14 UEDA Keita (Yokohama F Marinos Junior Youth)
I made my first appearance in the national team. I was a little nervous at the beginning but kept my focus by simply doing my job as usual. One of my strengths is attacking plays on the overlap, and I did well today to get involved often in such plays as well. I felt however that I need to work on my ball-handling skills. We have one more match left and will brace ourselves to grab a win in the final match before returning to Japan.

MF #17 NISHIKAWA Jun (Toukou Gakuen High School)
It was a very important match for us. In the beginning we struggled with their defensive blocks, but after discussing about how to break through their defence, we performed much better and attained the desired result. However, the team and I, personally, have many areas that we need to work on. We will make the necessary adjustments prior to the match in two days and get through the first round of AFC competition.

MF #10 NARUOKA Hikaru (Shimizu S-Pulse Junior Youth)
We did well to pull off a comprehensive victory over Singapore, and I am glad that I contributed to the team by scoring a goal. However, I believe that we can perform at a much higher level. We wasted too many chances by making passing errors or losing possession before breaking through their defence. As a holding midfielder, playmaking and orchestrating chances are both important aspects of my game. Those will be the key areas that I will be focusing on in training. Next match against Malaysia is the last match of first-round competition. I will keep all these issues in mind during the game and hope that I can play instrumental part of our attacks as well.

*Local Time
*The schedule may be subject to change due to the team condition, the weather, etc.
*A total of 16 teams, winners of Group A~J (10 teams) and 5 best second-placed teams among all the groups in the qualifiers and hosts, will participate in the AFC U-16 Championship China 2016 which will be held on October 2018.