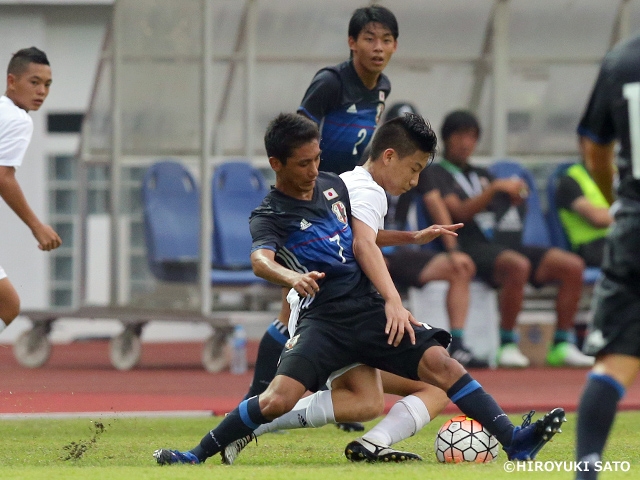 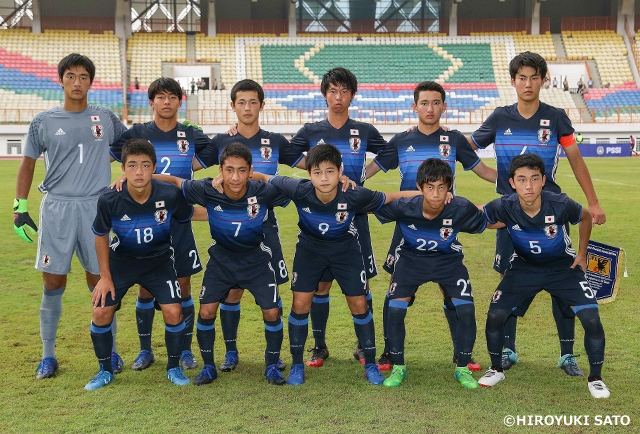 The AFC U-16 Championship 2018 Qualifiers kicked off in Bekasi, Indonesia on Wednesday 20 September, and U-15 Japan National Team played their first match against Guam.

Japan took control of the match from the beginning of the match and displayed their attacking style of football by tallying a total of seven goals just in the first half. In the 5th minute, after earning a free right just outside of the penalty area, NAKANO Keita directly fired in and scored the opening goal of the game.

After 9 minutes, from a wonderful exchange of passes YOSHIDA Yuji was put through cleanly and the Japanese foward capitalised on this chance to double the advantage. Then, on 14 minutes, YOKOKAWA Asahi reacted to Nakano Keita’s corner and nailed home a header and extended their lead to 3-0.

Japan’s dominance continued as SUMI Kohshiro collected a change-of-side ball from SAKO Maaya and sent in a cross to the box, where Nakano Keita netted his second and fourth for the team in the 19th minute. The Japanese squad added the fifth from their opponents’ own goal after 26 minutes and the sixth from Yoshida in the 32 minute, and ended the first half with the Nakano Keita scoring a hat-trick on 38th minute, before Japan took a 7-0 advantage at halftime.

Japanese coach ARIMA Kenji instructed his players at the break, ‘In order to improve the quality on the ball, we must also improve the off-the-ball preparations as well. If we make a good preparation, then we will be able to defend well and make better transitions to our attacking plays.’ ‘You met my expectation in the first half, but we are aiming to play at a much higher level,’ added the Japanese boss before his players entered the pitch for the second-half contest.

Goal rush continued for the Japanese team as they came out strongly and threatened the opponents with excellent attacking plays. The first goal in the second half came from Yoshida in the 51th minute, followed by Nakano Keita converting the penalty on 54 minutes.

Sumi displayed his excellent attacking talents as he quickly reacted to the opponents’ clearance and dribbled past the backline to fire home the tenth goal for the team in the 60th minute. Sumi was alsoinstrumental in assisting a wonderful goal on 62 minutes, when he surged up the right flank and send in a cross to onrushing Yoshida in front of the goal. Then, the Japanese striker made no mistake to extend the Japanese lead to 11-0.

Nakano Keita came back to the scoring scene with another converted penalty in the 64th minute, followed by Sako nailing a header off a corner on 66 minutes. Goal-tallying show continued with second-half substitutes KONDO Kuraba and AOKI Yusuke each scoring a brace. The scintillating attacking performance from Japan ended with the youngest member of the squad, NAKANO Shinya, scoring the twentieth and last goal of the team before routing Guam with a 20-0 victory in their first match of the qualifiers. 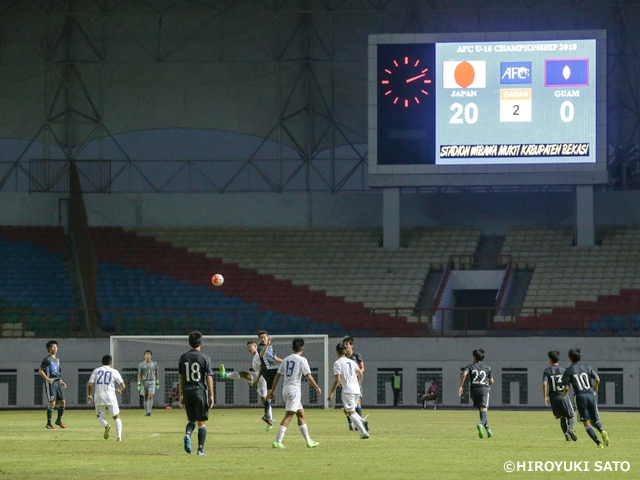 U-15 Japan will have a one-day rest before they face Singapore in their second qualifiers for the AFC Championship.

DF #3 SUZUKI Kaito (Jubilo Iwata U-15)
It was my first official match as a national team player. I think that today’s excellent result could be attributed to our competitive spirit and strong mentality as well as the team being prepared to give their best performance on the pitch. In the first half, we had a difficult time figuring out how the opponents would play. During the half-time break, we discussed the ways we could sort this all out and began to shout out more instructions to each other on the pitch. That significantly improved our plays in the 2nd half. However, we still have some issues including making needless mistakes and adjusting the timing of our runs and passes. We will correct these issues as we get ready for the next two matches.

DF #22 NAKANO Shinya (Sagan Tosu U-15)
I was a little nervous at the beginning, thinking that this is the important first match of the Asian qualifiers. Such wasn’t a big concern, as we got off to an excellent start. I found it also important that we put pressure from the front line and every one worked hard to reclaim the ball. In the 2nd half, we played even better as we stole the ball upfront and carried up to the front of opponents’ goal more often. We also did well to tally 20 goals in total. We will keep working hard to win both of our upcoming matches.

FW #9 NAKANO Keita (Kyoto Sanga F.C. U-15)
I think it became a one-sided game because we knew exactly what we needed do on the pitch and executed them well. During the match we raised our voices to communicate with one another and kept our focus until the end of the match. However, there were times that we lacked the physical intensity to maintain possession or made simple, needless errors. We will correct these issues before the next match. On 22 September we will play against Singapore, and on 24th we will face Malaysia. We will strive to improve our football and I hope we can overwhelm the opponents we face in the qualifiers. We appreciate your support.

*Local Time
*The schedule may be subject to change due to the team condition, the weather, etc.
*A total of 16 teams, winners of Group A~J (10 teams) and 5 best second-placed teams among all the groups in the qualifiers and hosts, will participate in the AFC U-16 Championship China 2016 which will be held on October 2018.