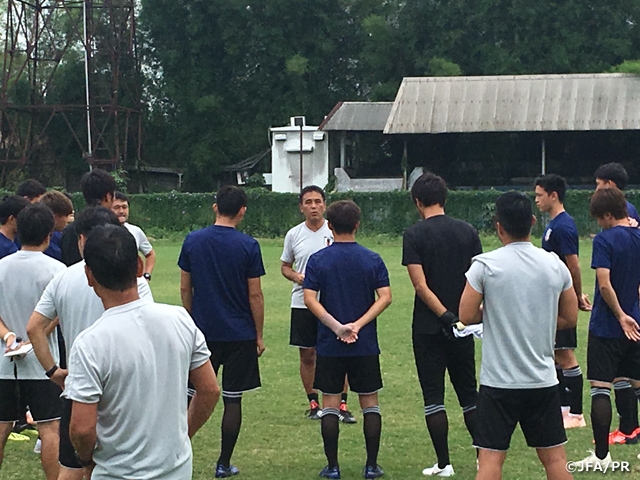 On Monday 22 October, the U-19 Japan National Team secured their spot into the knockout stage after winning their match against the U-19 Thailand National Team 3-1.

One day following the match, the team started to prepare ahead of their next match against the U-19 Iraq National Team.

The players who played in the match utilised the facilities at their hotel to conduct recovery trainings, while the reserve players including those who had limited playing time conducted a training session at Bogor, Indonesia in the morning. The session lasted about 90 minutes where the players showed great intensity as they worked up a sweat.

Although the team has already secured their spot into the knockout stage, Coach MORIYAMA mentioned regarding the match against Iraq, “We still have long ways to go, and the match will give us an opportunity to further develop ourselves,” indicating that they will prepare and enter the match with full intention to make the most out of it. 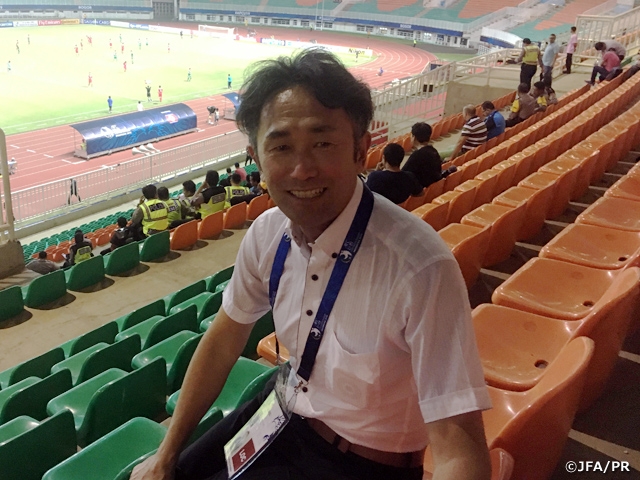 Today we will introduce an individual who is exceling at the world stage while representing the Japanese football community.

Featured in this picture is Mr. NAGI Toshiyuki, an assistant referee who has been part of over 100 matches at the J. League until 2017, and at many international stages such as the AFC Champions League, FIFA Club World Cup, and the FIFA World Cup Brazil 2014. On February 2018, he was appointed as the Referee Director of the Football Association of Indonesia and has been sharing his wisdom and experience for the development of Indonesian referees.

The Football Association of Indonesia has been supporting the AFC U-19 Championship that is currently taking place in Indonesia. Although Mr. Nagi is not directly involved, he is providing support in many ways. When the U-19 Japan National Team faced the U-19 Thailand National Team on the 22nd, he visited the stadium and offered to help out the Japanese side. He was greatly concerned about their meals and introduced local stores that sold Japanese food, showcasing his warm hospitality towards the players. With the support and expectations from many people around the world, the U-19 Japan National Team will continue to strive for higher goals. 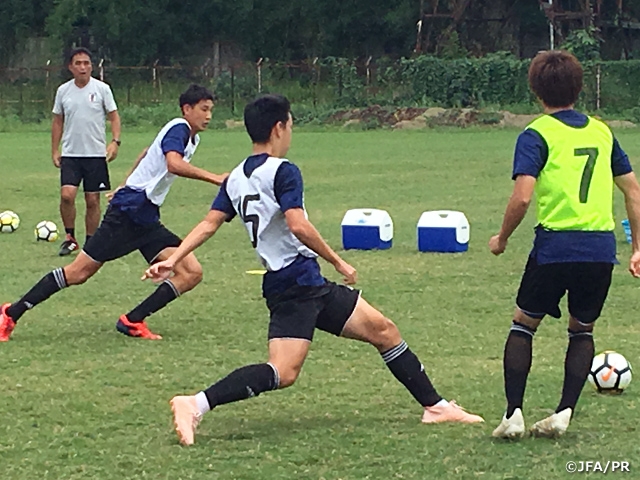 DF #5 SUGAWARA Yukinari (Nagoya Grampus U-18)
Although we have won back-to-back matches to secure our spot into the next round, our goal is set much higher, so we will continue to stay focused and strive to achieve our goal. It is important to keep the team’s atmosphere positive, and I think it is my job to keep my teammates motivated. In the past two matches, we have been conceding after we scored our own goals, so we must be more focused to get rid of that habit. Not only the players on the pitch, but everyone on this team must rethink their approach, otherwise we will be facing much more difficult stretches in our future matches. The first match showed us exactly what would happen when we let our guards down for a second. We must not allow the same thing to happen again. I personally must get more involved in our offence with my crosses and passes, while I need to step up on my one-on-one defence and focus to keep a clean sheet. As the representative of our nation, we are striving to win the title of this tournament and earn our ticket into the World Cup. We will give our very best so that we can provide good news to Japan.

MF #8 FUJIMOTO Kanya (Tokyo Verdy)
In our first two matches, we managed to earn points in a positive way. The fact that the team has been playing under a positive atmosphere from the training session has helped us carry the momentum into our matches, and we are currently training with great vibes. In our first match, we couldn’t manage the match in our favour after we scored two goals, and it made us realise that the qualifiers in Asia is not a walk in the park. I know that my team expects me to get myself more involved in our plays, provide rhythm to the team, and control the game. We will be focusing on just winning the match against Iraq while we prepare ourselves. We hope to showcase a positive performance that can lead us to more success in the future.

FW #13 HARA Taichi (F.C. Tokyo)
After the consecutive wins, the team is surrounded by a positive atmosphere and the team is in great form right now. In our first two matches, we faced teams that can strike with just one counter attack, despite their lack of ball possession. I understand that the team needs me to keep the ball upfront and initiate the attacks, as well as to score goals. My condition is gradually getting better, so when I am given the opportunity, I hope to capitalise it and score a goal. Iraq will probably come out with great intensity, but we will stay focused to win the match. I am eager to score a goal, so I hope to score the winning goal for my team.