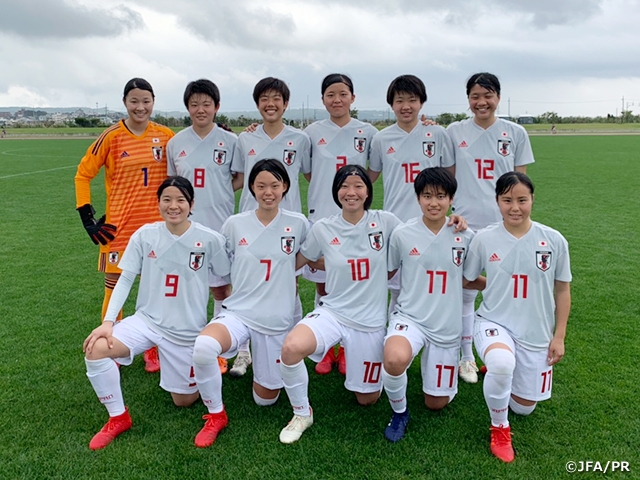 Unlike the day before, the match day saw an unstable weather with partial rain.

In the early minutes of the match, the Japanese side took the initiative by applying aggressive pressure from the front line to force turnovers. An opportunity was created in the fourth minute when HARA Mina broke through the left side before sending a cross, but her delivery came short from finding a teammate. Three minutes later, KAJII Suzune received a long feed from the defence line before passing the ball to NAKAO Mom, who struck a right footed shot, but her attempt went wide of the goal. The opening goal came in the 12th minute when Kajii chased down a through ball before netting a shot to give Japan the lead.

Japan entered the second half with the intention to extend their lead, but it was Myanmar who captured the next goal, as they broke through the Japanese defence line to equalise the match in the 31st minute. In efforts to retake the lead, Nakao and FUJISHIRO Maho combined with each other to penetrate the right side before sending a low cross, but the delivery couldn’t quite reach their forward KAMIYA Chiina. Despite creating many opportunities, Japan failed to convert the go-ahead goal as they ended the match with a 1-1 draw.

GK #1 WADA Ryoka (Albirex Niigata Ladies U-18)
We got together to discuss the pros and cons of our match against Thailand and entered the match with a full intention to communicate with each other on the pitch today. However, we ended up with a disappointing draw and I personally saw many flaws in my performance. In tomorrow’s training session, we will go over our team and individual tasks to improve ourselves ahead of the next match.

MF #7 TAKAYAMA Nohara (Urawa Red Diamonds Ladies Youth)
Today’s draw against Myanmar was a very disappointing result for us. Although we managed to score the opening goal, we showed our impatience after conceding the equaliser in the early minutes of the second half. I felt the need to be more crucial to capitalise on the opportunities throughout the entire match. We only have two more matches with this team, so we need to cherish each and every day from now to make ourselves a better team.

MF #16 NISHINO Akane (Tokiwagi Gakuen High School)
We felt that we lacked motivation ahead of yesterday’s match, so we entered the match with great enthusiasm today. However, we saw many flaws both as a team and as individuals, so we must train to get better ahead of our third match. There are many ways to approach the match and the same result can be felt very differently depending on how we perform. We hope to utilise every second effectively and strive to win the remaining matches.

MF #17 NAKAO Momo (JEF United Ichihara Chiba Ladies U-18)
After holding a players’ meeting after yesterday’s match, we saw better combinations today, but with the game time limited with 30 minute-halves, we seemed to rush our plays too much and lost the possession of the ball. I felt the need to improve our decision makings and techniques to control the ball on the move. I am grateful to be given the opportunity to play football in such wonderful environment and hope to make the most of this situation by improving the team and myself in the remaining two matches.