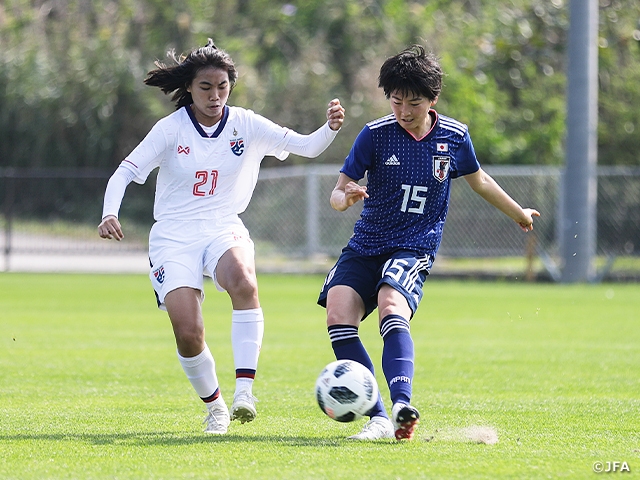 The match kicked-off under a warm weather where the temperature rose up to 25 degrees Celsius. It was the Thailand side who was the aggressor in the early minutes, as Japan was forced to be in the defensive end. Japan’s first opportunity came from a build-up play initiated by their goalkeeper FUKUDA Shiori in the seventh minute, as the ball was connected from NAKAO Momo to TAKAYAMA Nohara, but the midfielder was called offside. Three minutes later, Nakao and FUJISHIRO Maho played a give and go before delivering the ball to KAMIYA Chiina, but the forward’s shot went wide from the target.

Despite ending the first half scoreless, Japan continued to show their dominance in the second half. In the 35th minute, the deadlock was broken when MIURA Haruka received the ball from Kamiya, before she dribbled into the penalty box and fired a shot into the net. 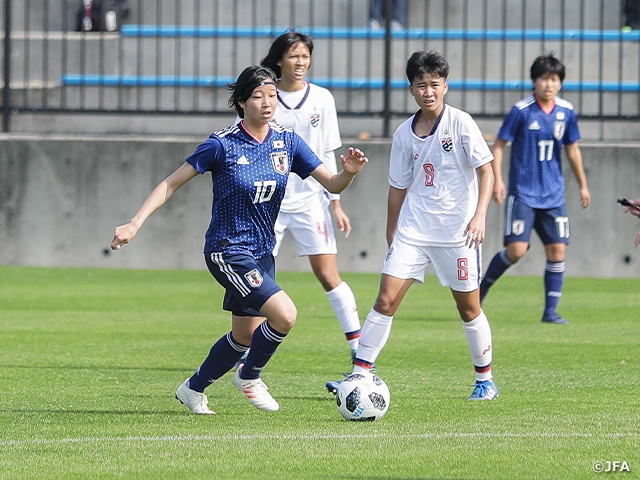 Seven minutes later, KAJII Suzune converted the loose ball following a corner kick to make it 2-0. With momentum on their side, the Japanese side went onto capture two more goals in the 52nd and 57th minute to finish off the match with a score of 4-0. 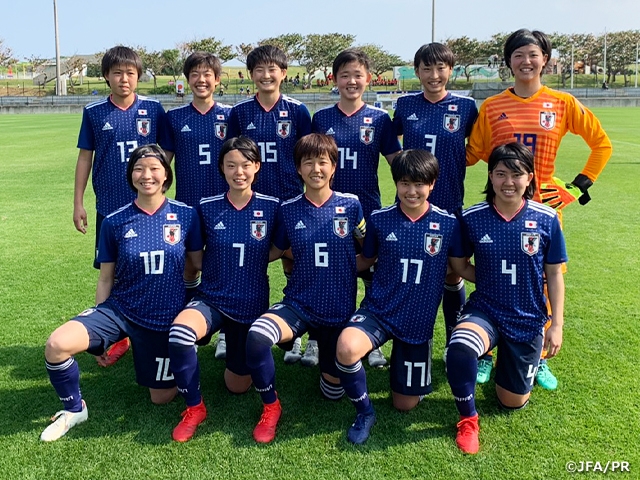 GK #18 FUKUDA Shiori (Urawa Red Diamonds Ladies Youth)
We looked stiff and got overwhelmed by our opponents’ intensity in the early minutes of the match, but I am glad we managed to win the match with a score of 4-0. I wasn’t involved in many plays today, but I was able to showcase my strengths by utilising the long balls to help our offence. We will be facing consecutive matches, but we will do our best to maintain our conditions while heightening the team coordination.

DF #4 FUJISHIRO Maho (JEF United Ichihara Chiba Ladies)
With this being our first match as a team, we were nervous and anxious at first, but the fact we managed to win the match 4-0 gives us great confidence moving forward. It’s hard to play well against opponents with great athleticism, but we just focused on challenging what we can do. We will work on our tasks to improve ourselves with the confidence we gained today and continue to strive to win matches.

MF #6 HISANAGA Mio (Nippatsu Yokohama FC Seagulls)
This was this team’s first match. As time progressed, we started to notice our teammates’ characters and play styles, which led us to gradually demand more detailed plays from each other. We had a stint where our plays weren’t in sync with each other, but I am glad we were able to win our first match. I personally saw many tasks I need to work on. We hope to improve ourselves in each of the upcoming days, both as a team and as individuals.

FW #9 TAKEDA Asumi (Albirex Niigata Ladies)
Although it was great that we managed to win the match, we saw many aspects we need to improve on. The players abroad are much more physical, and we need to be more creative to score goals against them. We will communicate more with each other and do our best to prepare ourselves ahead of tomorrow’s match.