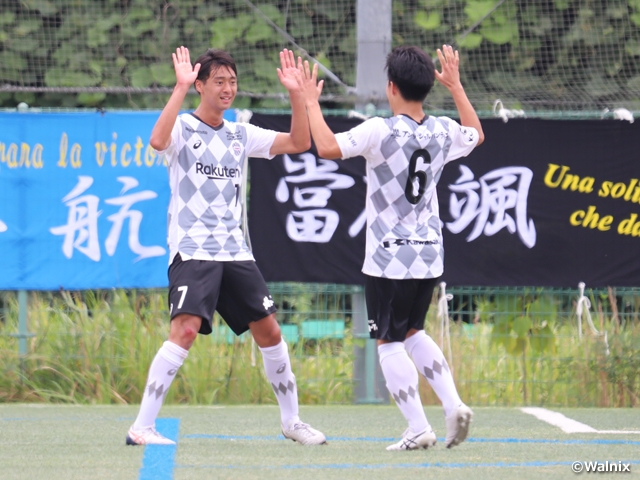 “We wanted to possess the ball in the midfield, but our opponent defended well to keep us from advancing up the field.” As their defender FUJIMOTO Soma (#4) later reflected, Kobe struggled to move the ball around in the early minutes of the match. In the sixth minute, the ball cleared by Osaka’s HIRAKAWA Takuto (#15) was connected to NAGAKAWA Kanta (#8) and reached SAKAMOTO Isa (#11), who scored the opening goal. Despite conceding an early goal, Kobe kept their composure to control the game, as OZAKI Yusei (#19) led the defence to move the ball around. Kobe utilised the width of the field to create chances, but failed to equalise the match, as Fujimoto mentioned, “We lacked creativity in front of the goal. We also were not able to win the individual battles, which was an aspect our coach told us to focus on in this match.” However, their patience got paid off in additional time of the first half, when NAGASAWA Mikaze (#34) delivered a pass towards the right side of the box. It was GOMI Ikuto (#9) who responded to the ball and delivered a cutback towards the centre, allowing OSHITOMI Taiki (#6) to score the equaliser.

Kobe’s coach NODA Satoru mentioned, “That first half equaliser was huge for us.” However, it was G. Osaka who took control of the second half, as Sakamoto later reflected, “We managed to build our momentum by intentionally blocking the central space and applying more pressure from our front line.” With their attacking players forcing more turnovers upfront, their fullbacks, WAKIYAMA Haruto (#17) and NONAKA Riku (#22) made numbers of overlaps to add layer to their offence. In the 55th minute, Nonaka’s pass found MINAMINO Harumi (#25) in front of the goal, but his shot was blocked by the Kobe defence.

Despite getting dominated by Osaka, a golden opportunity came for Kobe in the 80th minute. With MIURA Toshikuni (#13) posted up to deliver the ball to Oshitomi, the ball was passed to SASAKI Takaya (#7), who calmly converted the opportunity to shake the net. This goal was the deciding goal which raised Kobe to third place in the rankings. With their playoff berth at stake, Kobe will now play their rescheduled fourth sec. match against Osaka Sangyo University High School (Osaka) on Sunday 29 November.

SHIMADA Takahiro, Coach (Gamba Osaka Youth)
We wanted to take control of the ball possession, but our opponent showed quick ball movements and held the ball longer than us. Although we managed to make our adjustments in the second half, we still lacked quality to convert our chances. Despite the ongoing pandemic, we are given this wonderful opportunity to compete in a league and face teams we would not have faced in the Premier League. Through these matches, we are now realising what we lack, such as the intensity to win the ball and our response to loose-balls. If these players are striving to become professional, they must improve these aspects as a player. I hope these matches will give them the opportunity to realise what they must work on in order to become a better player.

DF #5 ONO Shinri (Gamba Osaka Youth)
Depending on the results of other teams, we still had a chance to be in second place, so we trained hard all week for this match. We had conceded the opening goal in the recent three matches, so it was great to see us score the opener in this match, but we failed to score the second goal despite taking control of the match. We were upset that the Premier League was cancelled, but we stayed positive for this opportunity to face teams we do not normally play against. This result was unfortunate, but through these matches, I am more eager to contribute and allow the team to win the matches.

NODA Satoru, Coach (Vissel Kobe U-18)
We committed too many simple mistakes in the early minutes and conceded the opening goal. However, after we settled down, we managed to utilise the width of the field and take control of the match. It was great to see our players move the ball around to allow our midfielders to be more involved in our offence. We struggled to find our rhythm in the second half, but we managed to keep our composure which led us to score that second goal. This year, we were given the opportunity to face teams outside the Premier League, which was a positive experience for us. These matches allowed our players to realise that they must be more critical in front of the goal and play even harder in defence to win matches, so all and all, it has been a great learning experience for our players.

DF #4 FUJIMOTO Soma (Vissel Kobe U-18)
Gamba Osaka is another team belonging to the Kansai J Academy, so this was a match we could not afford to lose. Our opponent possessed the ball well and showed great skills to control the match, but there was a vibe in the second half, where we felt like we can win the match as long as our defence hold up. We have started to become more tenacious in front of our goal in the recent matches. We still have a rescheduled match left to play. It is our job as the third graders to keep the team motivated ahead of the play-offs, so I will stay vocal in our training sessions and become a role model for the younger players. 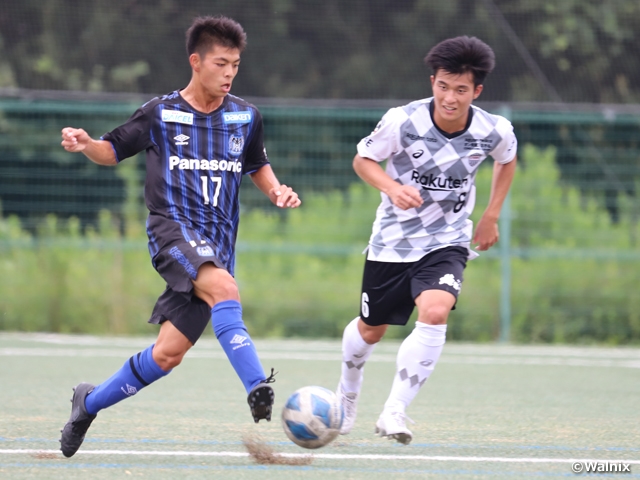