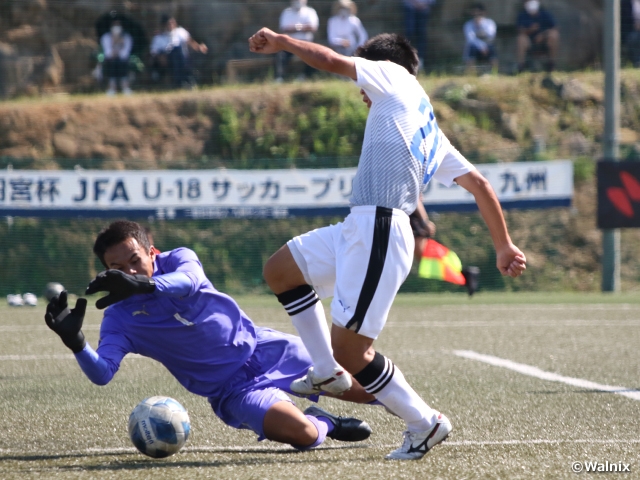 After playing four matches, Ozu High School (Kumamoto) has won all matches while scoring 18 goals and conceding just one goal. On the other hand, Kamimura Gakuen High School (Kagoshima) has also kept an undefeated record of two wins and a draw up to this match.

The match kicked-off with Kamimura Gakuen showing great intensity in the early minutes, as their defender INADA Shoma (#5) mentioned, “We wanted to gain positive momentum ahead of the All Japan High School Soccer Tournament.” In the fifth minute, SHINOHARA Shunta (#11) penetrated the left flank to create an opportunity, followed by chances created by YOSHIDA Takeru (#6) and NUKIMIZU Kota (#16) in the sixth and eighth minute respectively, but their shots failed to capture the net. 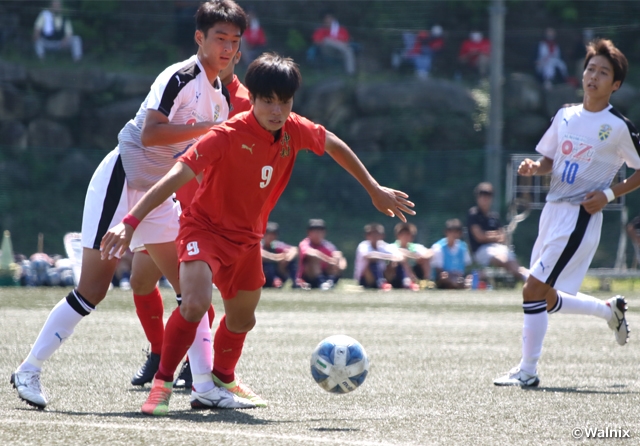 However, it was Ozu who scored the opening goal. The goal came in the ninth minute, when Ozu’s HANDAI Masato (#9) carried the ball up the left flank, as he later reflected, “I focused on receiving the ball near the opponent’s defensive midfielder.” The ball was then sent to the right side, where HAMADA Toga (#2) made a run to deliver a cross towards the middle, allowing MIYAHARA Aiki (#11) to convert the deflection to score the opening goal.

With momentum on their side, Ozu gradually started to dominate the match, as they applied more pressure upfront. The Kumamoto side expanded their lead following the water break, as Handai and FUJII Eito (#8) scored a goal apiece in the 36th and 39th minute respectively, giving Ozu a commanding lead at halftime.

“We were not able to evade the pressure applied by the opposing attackers. Our defenders could not position themselves well in our build-ups and our defensive midfielder was not able to contribute to our offence.” Just as coach ARIMURA Keiichiro later reflected, Kamimura Gakuen continued to struggle against the opponent’s pressure and conceded the fourth goal from a corner-kick in the 67th minute.

In efforts to rally back, Shinohara responded to a cross delivered by TERADA Satoru (#12) during additional time, but his effort failed to capture the target. Conversely, Ozu’s substitute, KAWAGUCHI Atsushi (#17) scored the fifth goal in the 95th minute to close out the match, giving Ozu a dominating victory. 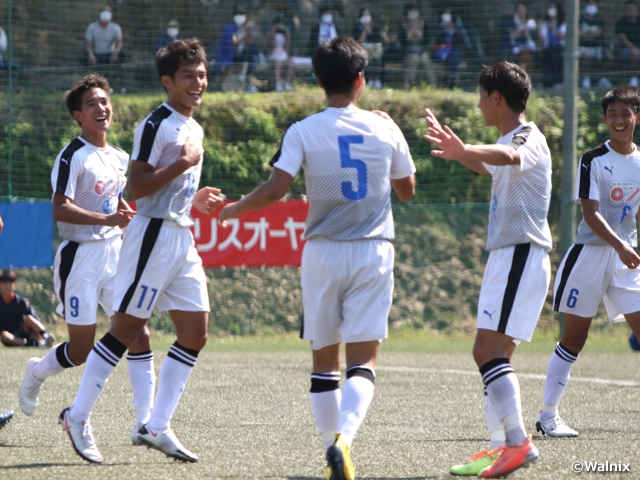 Effected by the ongoing pandemic, this season has seen many irregularities, but with the cancelation of the Inter-High School Championships, this league provides critical experience for the high school teams to tone up their game intuition and gain opportunities to improve, both as a team and as an individual. The teams will utilise the experience to prepare for the prefectural qualifiers of the All Japan High School Soccer Tournament. The Super Prince League Kyushu is scheduled to hold its play-offs from Saturday 21 to Saturday 28 November.

ARIMURA Keiichiro, Coach (Kamimura Gakuen High School)
This was our final official match ahead of the All Japan High School Soccer Tournament, and we focused on keeping our defensive shape compact. However, we lacked speed in our defence. Each player worked hard at an individual level, but there were many aspects we need to improve as a group. Ozu High School is one of the top teams in Kyushu, so this was a great learning experience for us to find out where we currently stand.

DF #5 INADA Shoma (Kamimura Gakuen High School)
We have kept an undefeated record up to this match and another win would have given us great momentum heading into the All Japan High School Soccer Tournament, so we really wanted to win this match, but we just could not showcase our usual offensive shape. Our opponent had the upper-hand against us in terms of the quality of transition, ball possession, and overall speed. From this match, we learned that we must fight harder for the ball and add more layers to our offence, so we hope to improve ourselves ahead of the All Japan Tournament to make a deep run at the national stage.

YAMASHIRO Tomohiro, Coach (Ozu High School)
We entered the match with the intention to apply aggressive pressure against a 4-1-4-1 formation. We started off the match poorly and conceded some close opportunities to our opponent in the early minutes. However, the opening goal has given us momentum to dominate the match. We were able to win all five matches because of our players’ hard work, but it does not mean that this result will translate to the All Japan High School Soccer Tournament, so we will continue to work hard to improve our team ahead of the tournament.

FW #9 HANDAI Masato (Ozu High School)
We allowed our opponent to create shooting opportunities in the early minutes of the match, but we were able to make the adjustments to penetrate the open space behind the opposing defence line. It was unfortunate that the Inter-High School Championships and the Premier League were cancelled, but we were able to change our mindset ahead of this league. We were able to showcase our usual football style and dominate each match, but there were still plenty of room for improvements. Last year, we lost at the prefectural final, so our first goal is to win the prefectural title and then we will strive to win the national title.