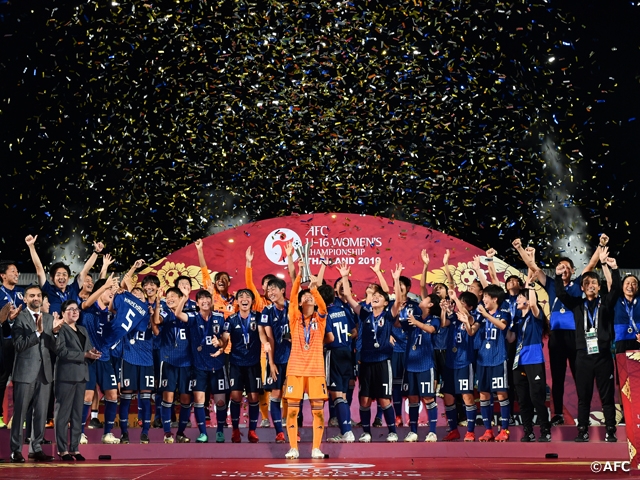 During the pre-match meeting, the Japanese team went over their team concept and reviewed the team report of their final opponent of this tournament. Coach KANO Michihisa sent off his players by telling them to play aggressively from the start and to make flexile decisions based on each situation.

The match between the two sides who were both seeking for their fourth title at the AFC U-16 Women's Championship, kicked-off at 20:00 local time (22:00 Japan time).

The match saw Japan showing their aggression to take the initiative, but the team conceded the opening goal in an unexpected manner. The goal came in the ninth minute, when Japanese defender TANNO Ririka committed a foul inside the penalty area to give up a penalty kick. DPR Korea calmly converted the spot kick to take a one goal lead in the early minutes. With the goal giving momentum to the opponent, Japan was forced to be in the defensive side for a stint, however, the equaliser was scored in the 19th minute, when IDE Hinata dribbled up the right flank before sending a pass upfront. With HAMANO Maika making a run to lure the defenders, INOSE Yuko was able to connect with this pass and drop the ball to AMANO Suzu, who took on the opposing goalkeeper one-on-one and slotted the ball into the goal. Following this goal, Japan regained their composure and started to show great ball movements to take control of the match. In the 23rd minute, Inose earned a freekick deep in the opposing territory. OYAMA Aemu delivered a fast driven cross towards the goal, which was deflected towards HAYASHI Manaka, who struck a powerful shot that pierced the goal, giving Japan the go-ahead goal. With both teams displaying great defence, the match entered halftime with Japan leading 2-1. 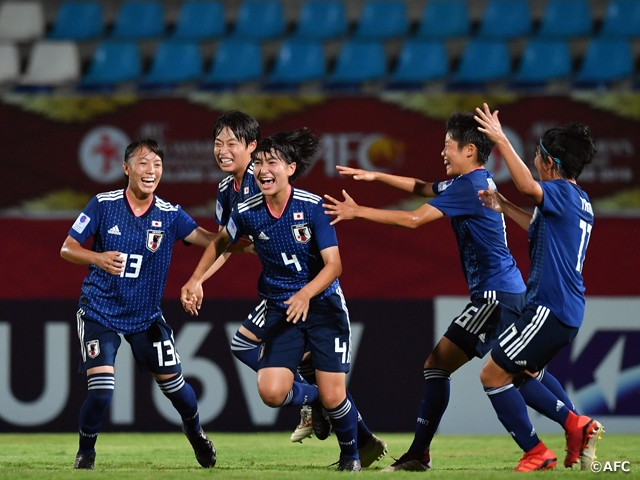 The match intensified in the second half, as both teams showcased a heated battle throughout the half. Japan came close to scoring a goal in the 76th minute, when the ball was connected through NEBU Momoko to Amano, the final pass was delivered to MINOWA Chisato, who struck a shot, but her attempt was slightly off target. Oyama also came close to extend Japan’s lead, when her freekick attempt went off the goal post after being parried by the goalkeeper. Despite seeing numbers of opportunities, Japan came fell short from scoring further goals. DPR Korea also made their final push to equalise the match, but their efforts were denied by the persistent defence showcased by Japan, as the match ended with a final score of 2-1. 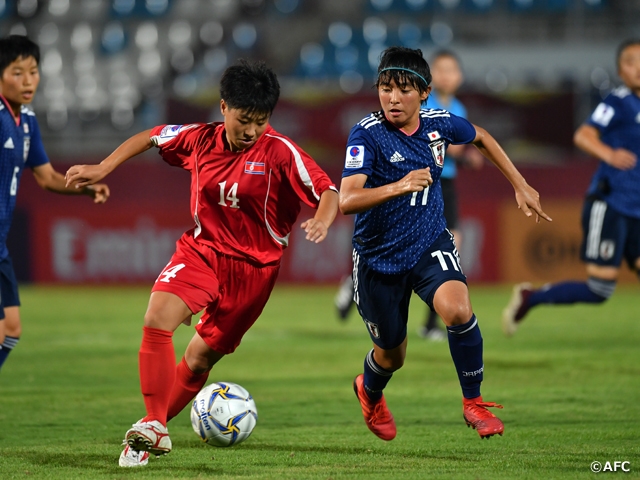 As a result, the U-16 Japan Women's National Team earned a record breaking fourth overall title at the AFC U-16 Women's Championship. The team will now work towards the FIFA U-17 World Cup India 2020.

KANO Michihisa, Coach (Sagawa Shiga FC)
I am proud of my players for achieving their goal of reaching the final of the AFC U-16 Women's Championship. Prior to the match, we promised each other to give our utmost efforts at this match. We expected a tough match, so our ability to make accurate plays and decisions under pressure was going to be the key factor in this match. Despite conceding the opening goal, our players showed great composure and managed to come from behind to take the lead. We made adjustments after each match and we were able to improve ourselves throughout this tournament. Since launching the team in February, we held four training camps and tours to prepare for this tournament. The players showcased great positivity in every activity and the team vibe got better even after we arrived in Thailand. Their positivity has certainly played a big factor for this team’s success. I am truly happy that our efforts have been paid off with the championship title. I would like to share my gratitude towards all the people who have supported us, and the schools and clubs of our players for allowing them to join our team for such a long period of time. Thank you very much.

GK #1 NODA Nina (Nippon TV Menina)
We entered today’s match with the intention to fight hard as a team and to achieve our goal we have set up since starting the team. Although we gave up the opening goal, we managed to reset our minds and keep our composure, which allowed us to come from behind and take the lead in the early minutes of the match. During the match, I focused on controlling the defence line and managing the risks against the opponent’s long balls. We were forced to be in the defensive end for a long stretch during the second half, but we kept communicating with each other and managed to keep our one goal lead. Through this tournament, I felt the need to improve my goal kicks and punt kicks, so that I can initiate our team’s attacks more effectively.

DF #4 HAYASHI Manaka (JFA Academy Fukushima)
(reflecting on the goal scene) The ball came right at me, so I just had to make good contact with the ball. I was able to keep the shot low and I was very happy when it went in. Hitting the ball hard is my strong point, so I feel like I was able to showcase my strengths. DPR Korea played with great intensity and they were technically very sound. As a defender, facing such opponent gave me a great learning experience. Throughout the tournament, there were many scenes where a play that can be effective in Japan was not so effective at this level, and we were able to feel in first-hand just how high the competition is in Asia. We really had to dig deep and fight as a team to win each match. We are now set to play in next year’s World Cup, so once I return to my team, I will work hard to be selected into the squad for the World Cup.

MF #6 AMANO Suzu (INAC Kobe Leoncina)
(reflecting on the goal scene) I saw the centre half making an approach towards Inose, so I made a run into the open space. As I made the run, the ball came to me at a perfect timing, so I just had to keep my cool and slot the ball into the goal. I got nervous when I received the ball, but I am glad I was able to keep my composure to score that goal. This was a very tough match overall, but we managed to stay positive and play with great persistency to defend our lead. Throughout this tournament, we were able to make adjustments after each match and improved our teamwork as we made a deep run. Since launching the team in February, our goal was to win this title, so I am very happy that we have achieved our goal. I will strive to become a better player so that I can help the team win the World Cup next year.

FW #10 NISHIO Hanon (Urawa Red Diamonds Ladies Youth)
With the tournament title at stake, I entered the match in the second half with a strong intention to help the team win the title. Although we were already up by a goal, I was eager to score more goals for the team. However, the opponents showed great intensity and their pressure was so fast, I wasn’t able to create much opportunities. I was honestly surprised when I was named as the tournament MVP. We have set our goal to win this Asian title, and the team has shown great improvements as we advanced through this tournament. As a forward, this tournament has given me a great learning experience, as I saw plenty of room for improvements at an individual level.

FW #14 HAMANO Maika (Cerezo Osaka Sakai Girls)
I was a bit rattled when we conceded the opening goal, but our reserve players kept encouraging us from the bench and it helped me regain my composure. In reality, we were still confident that we can win the match even after conceding the goal. As a forward, I really wanted to score goals for the team, but fell short from doing so. At next year’s World Cup, I hope to become a player that can score goals when the team is struggling. I will spend the remaining time ahead of the World Cup to improve as a player. The goal I scored against China PR was perhaps the most satisfying goal I have ever scored. We faced many opponents at this tournament, and we were able to improve ourselves from each match. The meals served at our hotel were delicious. All the supporting messages from Japan helped us gain power. This is a great team, and I really want to win the world title with this team. We have been undefeated since launching the team in February, so we hope to continue this streak.