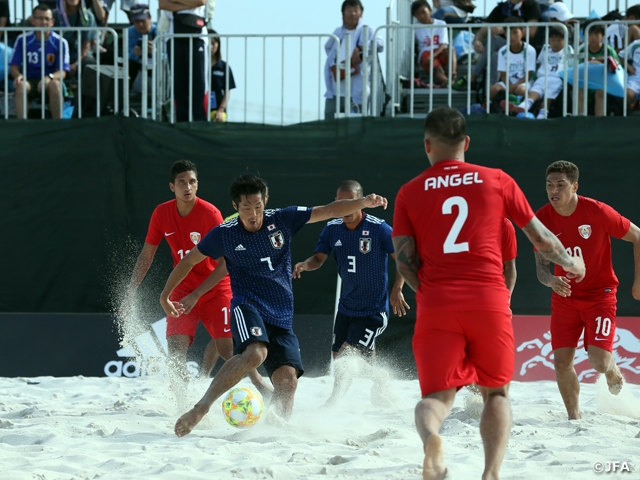 The match started off with Tahiti striking consecutive shots to show their aggression, but it was the Japanese side who captured the opening goal. The goal came in the third minute, when MOREIRA Ozu (#10) delivered a pass to OBA Takaaki (#7), who shook off the pressure of two opponents before striking a shot that pierced the Tahitian goal. However, Tahiti rallied back to score back to back goals to take the lead. Although the freekick scored by KOMAKI Masayuki (#8) levelled the match momentarily, Tahiti scored back another goal shortly after to retake the lead, as the first period ended with a score of 2-3. 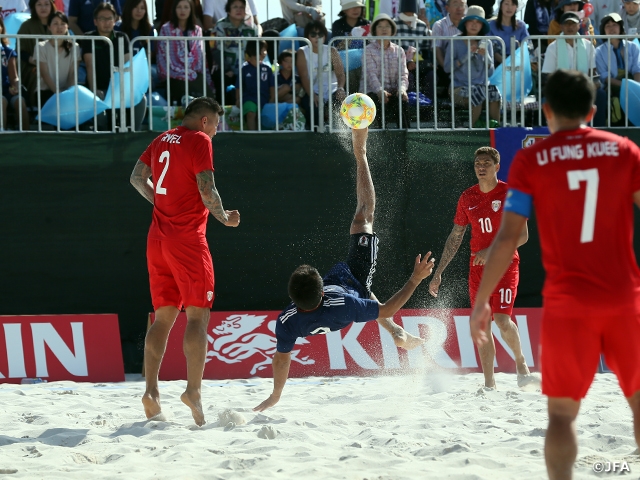 The second period started with Gervais CHAN-KAT (#8) scoring Tahiti’s fourth goal with a fantastic bicycle kick, but the Japanese squad, led by their goalkeeper GINOZA Tomoya (#12), showcased a persistent effort to minimise the damage to just one goal. However, Japan failed to score any goals during this period, as coach RAMOS Ruy gave a pep-talk during the interval, “with so many people coming to show their support for this team, are you okay with this spiritless performance? We must fight harder.” The Japanese squad responded to the coach’s words and out scored the opponent 0-2 in the third period, as MATSUO Naoya (#6) scored the first goal in the 32nd minute, followed by OKUYAMA Masanori’s (#11) equaliser in the 35th minute.

After the match ended scoreless in the three-minute overtime, the match entered penalty kicks to determine the winner. While Japan converted all of their spot kicks, Tahiti’s fifth kicker missed the shot to give Japan the victory in this heated battle. 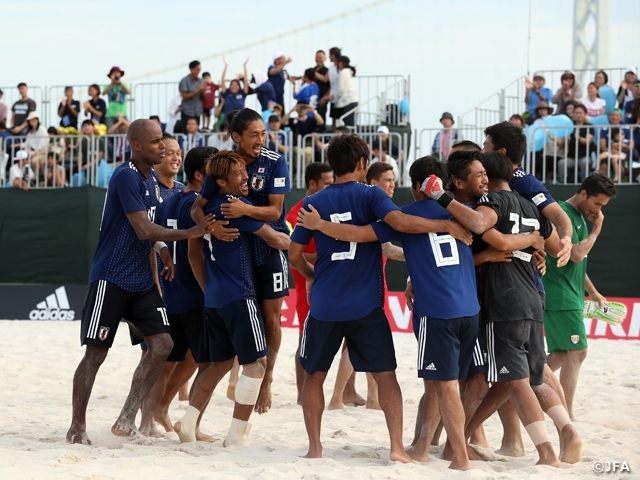 JFA President TASHIMA Kohzo watched over the match and shared his take on the performance showcased by the Japan Beach Soccer National Team, “the patriotic spirit of coach Ramos has given great inspiration to not just the beach soccer community, but to the entire organisation of the JFA. We will continue to provide full support for the team.”

RAMOS Ruy, Coach (Japan Beach Soccer National Team)
I am very satisfied with our performance today. We are very thankful of our fans and supporters for creating a very positive atmosphere. The national team does not have the opportunity to play at a regular basis, so it took us a while until we found our rhythm, but once we got on the same page, we showed great unity as a team. Although there were many scenes where our combinations were out of sync, I want my players to play with confidence and continue to challenge themselves to strive for a higher level. Winning the match is important, but more than anything, I want more people to know the joy of beach soccer and the to recognise how strong the Japan Beach Soccer National Team has become.

GK #12 GINOZA Tomoya (Veertien Mie BS)
I was not able to make the squad for our Portugal tour, so I entered today’s match with a strong intention to make a case for myself for the World Cup. I also didn’t want to make coach Ramos look bad in front of this huge crowd. Although I had to step out of the game in the early minutes with an injury, once I returned onto the pitch, I made sure to actively communicate with the field players to keep the team motivated. We still saw plenty of room for improvements, but we still managed to earn a victory with the help of everyone’s support. Thank you very much.

FP #7 OBA Takaaki (Loewe Yokohama)
We were not able to earn the results we wanted at the Portugal tour in August. However, we stayed positive and kept working hard to improve ourselves, which helped us win today’s match against Tahiti. Although it was great that we managed to score the opening goal, we had to endure a tough stretch after that goal. We allowed our opponent to take control of the match for a long time and we couldn’t make the adjustments on the pitch. We saw many flaws that needs to be addressed. However, we still managed to come out with the victory, so we should be proud of our performance.

FP #5 Naea BENNETT, Player-Coach (Tahiti Beach Soccer National Team)
We were able to spend a very productive time ahead of the World Cup. We managed to test out the 1-2-1 formation and gave our entire squad the opportunity to play on the pitch. I felt that the Japan Beach Soccer National Team is a strong team that can make a deep run at the World Cup. We saw plenty of room for improvements over the past two days, so we will continue to work hard and strive to become a stronger team both physically and mentally.