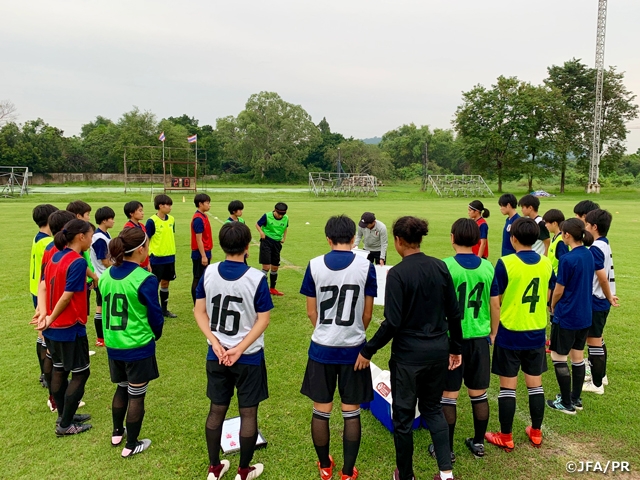 One day ahead of the tournament final of the AFC U-16 Women's Championship Thailand 2019, the U-16 Japan Women's National Team held their final training session on Friday 27 September.

In their first year of establishment, the U-16 Japan Women's National Team had their eyes set on the AFC U-16 Women's Championship title from day one. With just a win away from achieving their goal, the team held a meeting before the training session to go over the team report on their final opponent, the U-16 DPR Korea Women's National Team. At their final training session ahead of the title match, the team focused on reinforcing the team concept and spent time polishing their plays, as the session lasted for about an hour with great intensity.

KANO Michihisa, Coach (Sagawa Shiga FC)
In order to showcase our best performance at tomorrow’s final, we reviewed the three group stage matches and the semi-final match to assess our tasks and worked on those tasks during the training session to improve the overall quality of our plays. Despite only having two days to prepare for the match, we gave our best efforts to recover and condition ourselves within the given timeframe. Since launching the team in February, our players have set their goals to win the AFC U-16 Women's Championship and to earn their spot into the FIFA U-17 Women's World Cup 2020. Their tireless efforts have led them to this stage, so I hope they can play with great aggression to showcase their best performance at the final. We will play with persistence and give our very best efforts until the final whistle to win the title as a team.

DF #23 HIRANAKA Kyono (Urawa Red Diamonds Ladies Youth)
We held our final training session to prepare ourselves for the match against DPR Korea. We are expecting our opponent to showcase great intensity at the final, so we worked to polish on our first touches and the proceeding plays during this training session. We will certainly be facing a tough match tomorrow, so we must stick together as a team and fight through the entire match. I will give my utmost effort to prepare myself for the match and do whatever it takes to help the team win the title.

MF #15 OGIKUBO Yuri (Cerezo Osaka Sakai Girls)
We were able to hold our recovery session with a great vibe after the semi-final, and we saw ourselves actively communicating with each other in today’s training session, which left a very positive atmosphere ahead of the final. It was also great to see us getting on the same page in terms of team strategy, as we saw great collective efforts to force turnovers during the scrimmage. Ever since we started working as a team, we have strived for an attack-minded football style with great aggression. In tomorrow’s match, we hope to showcase our style of football and finish the tournament on a high note, so that we can all go back with a smile.

MF #17 INOSE Yuko (Mynavi Vegalta Sendai Ladies Youth)
I did not play in the semi-final match, so I went through an intense workout on the following day to match my teammates’ workload. Ahead of today’s training session, we went through the team report on our opponent, which allowed us to get on the same page and prepare ourselves for the match. I personally was able to work on my ball controls and decision makings on the pitch. With the team heading into the final with just a two-day rest, the medical staffs have helped us tremendously to take care of our bodies. I hope to showcase everything I’ve got and give my utmost efforts to help the team win the title.