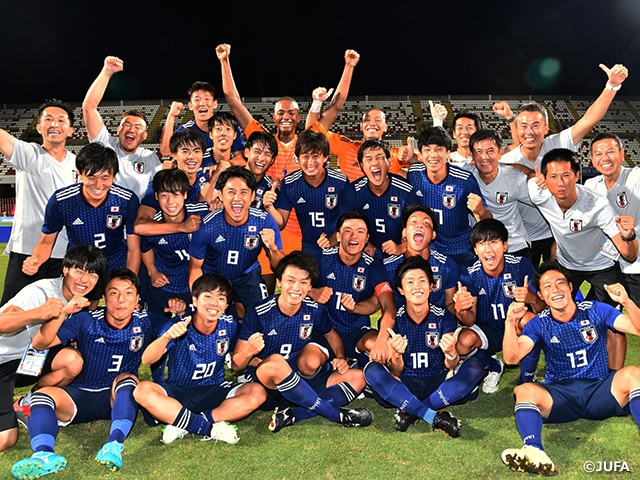 While Brazil entered the match with a rather defensive formation, Japan utilised the two wingers, MITOMA Kaoru and KONNO Kazuya, to aggressively attack the flanks. In the 18th minute, Mitoma got the crowd on their feet when he dribbled through nearly 50 meters to penetrate the Brazilian goal area. Two minutes later, HATATE Reo broke through the flank after exchanging the ball with Konno and delivered a cross towards the goal. Japanese striker, UEDA Ayase, made a diving effort to strike a header, but his shot sailed wide of the target. Hatate and Ueda continued to create opportunities in the remaining minutes of the first half, but the match entered halftime scoreless.

In the second half, Japan broke the deadlock when Mitoma was fouled inside the penalty area to earn a penalty kick. It was Ueda who stepped up to convert the spot kick and gave Japan the long-awaited lead. A second yellow card was shown to a Brazilian defender in this play, leaving Brazil with only 10 players for the remaining of the match. 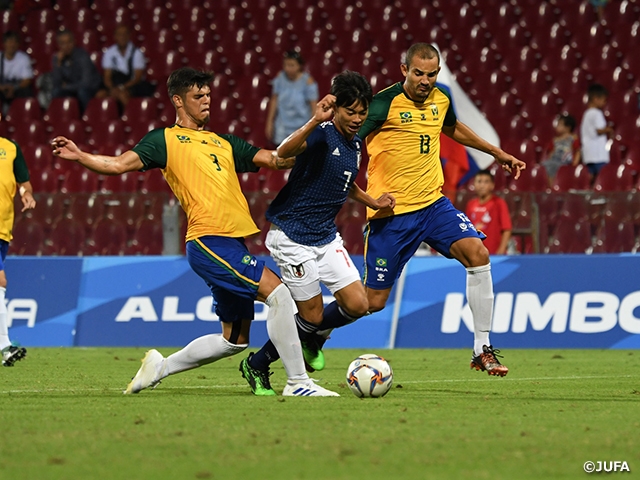 With the numerical advantage, Japan took control of the game through their quick ball movements and created plays that threatened the Brazilian goal. In the 64th minute, Ueda responded to Mitoma’s pass to break into the penalty area and struck a left-footed shot that captured the net. Hatate followed in the 70th minute, when he delivered the third goal for Japan, once again assisted by Mitoma. Despite conceding a goal to Brazil in the 78th minute, Ueda responded to a cross delivered by YAMAMOTO Yuki to complete his hattrick in the 82nd minute. 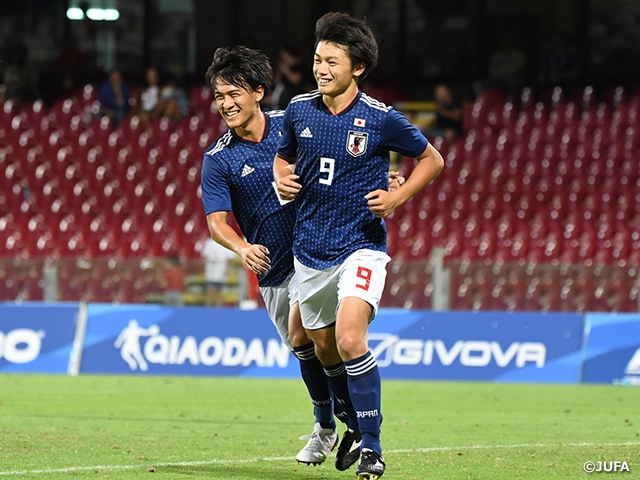 Japan kept their composure to keep Brazil from rallying back and finished the match with a final score of 4-1. As a result, Japan earned their second consecutive and seventh overall Universiade title. With this year’s tournament, football will no longer be played at the Summer Universiade, which means that Japan has earned the final gold medals for this sport. 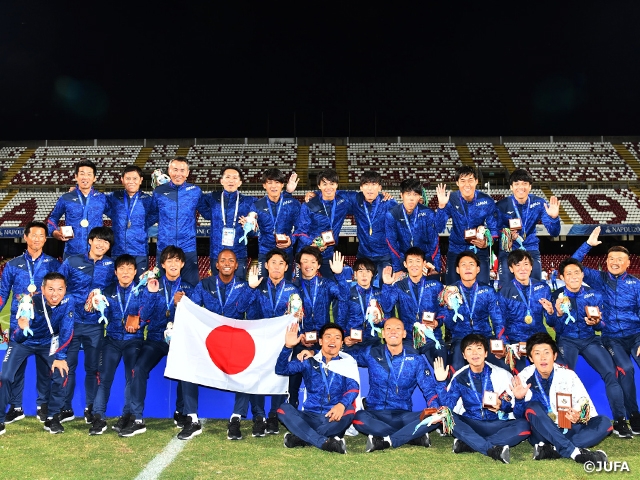 MATSUMOTO Naoya, Coach (Momoyama Gakuin University)
Brazil did not rotate their line-ups and some of their players played through all five matches, so we suspected that they would be fatigued at the final. As expected, they came out almost with a five-back formation to focus on their defence, so we planned to exploit the space behind their defence line by penetrating the flanks. Although we struggled in the first half, I knew our opportunity would come, so I kept telling my players to stay calm. I believe that this achievement was accomplished with the support of everybody who is involved in collegiate football. The fourth-year players of this team have experienced foreign tours from their first year and some of the players have participated in the Toulon International Tournament and the Copa America. Compared to the past Universiade National Teams I’ve seen, this team consisted with many top-level players and the team worked together extremely well. I hope that these players will utilise this experience to achieve great success at the Tokyo Olympics and strive to become future members of the Japan National Team.

MF #7 MITOMA Kaoru (University of Tsukuba)
With the opponents playing almost like a five-back formation, Konno and I focused on penetrating the flanks to initiate our attacks. In the scene where I earned the penalty kick, Yamahara and Hatate created the space in the centre for me to make a run, so I was focused on penetrating that space. I was able to showcase my strong points by delivering through balls and crosses that assisted the goals of Ueda and Hatate, but I still felt the need to be able to score goals myself. After losing to Brazil at the tournament final of the Toulon International Tournament, I entered the match with a strong intention to pay them back, so I am glad that we were able to win the match. From here on, I will strive to get selected into the national team of my age category and work myself into the squad for the Tokyo Olympics. At this moment, I think I am an unlikely candidate to make it into the short-list, so I will work hard to become a better player and strive to participate in the Olympics.

FW #9 UEDA Ayase (Hosei University)
Although we faced some difficult stretches in the first half, I noticed that our opponent’s defence line was not very organised. I shared my observation with my team during halftime and made the adjustments for the second half. The team was focusing on the attacks created from both flanks, but I told the team that I wanted to try catching the opponents off guard by utilising horizontal passes, and my third goal came exactly as I envisioned. I told the two defensive midfielders to send me a one-touch side pass, and they delivered just that to allow me to score that goal. The second goal was a routine play for us. I always keep in mind how Mitoma carries the ball and where he is heading, and our thought process completely synchronised in that play. In reality, my job is to finish off the final 10% of the play. The rest of the play is constructed by my teammates, so those goals I scored today was a result of great passing from my teammates.

FW #10 HATATE Reo (Juntendo University)
We struggled against Brazil’s defensive approach in the first half, but after they lost a player, we managed to showcase our usual style of football. When I scored the goal, I knew Mitoma was going to send a pass from the outside, so I just focused on controlling the ball and taking a clean shot. I felt like my techniques were tested in that play, so I am glad I was able to convert that goal. When Brazil advanced to the final round, I had a feeling that we were going to face them at the final. I am glad we were able to win, especially after losing to them at the Toulon International Tournament. Although our opponents were playing with a man down, the fact that we managed to win with a large margin shows us that we were able to showcase what we have been working on as a team. This was a very unique team with strong characters, so as the team captain, it was very difficult to get the team united as one, but with the support of vice-captain, ABE Koto, and many other people, I was able to unite these group of players into a team, so I am very thankful for all the support.