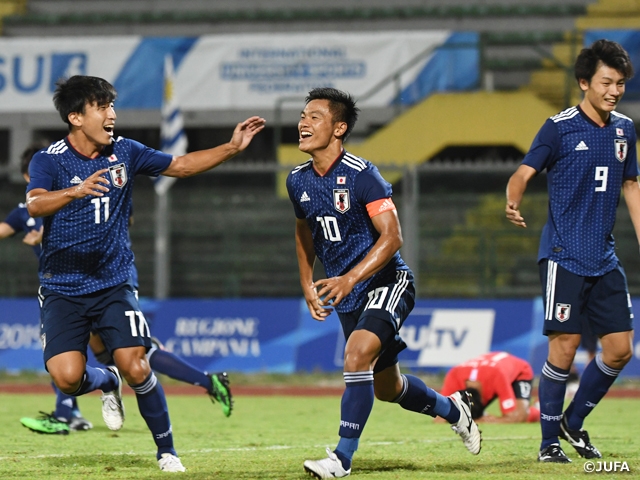 On Tuesday 9 July, the Japan Universiade National Team faced their arch-rival, Korea Republic at the quarterfinals of the 30th Summer Universiade Napoli 2019. After losing to Korea Republic in their most recent encounter in March, Japan entered the match with a strong intention to win the match, as their forward HATATE Reo shared his aspiration ahead of the match by mentioning, “we cannot afford to lose against the same opponent twice in a row.” 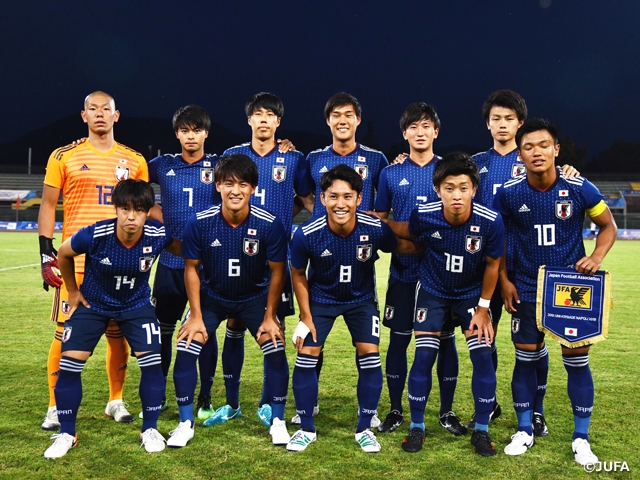 It was Japan who took the initiative of the match, as MITOMA Kaoru and KONNO Kazuya broke through the flanks to create chances. Korea Republic on the other hand, defended patiently to anticipate for their opportunities to counterattack. In the 23rd minute, Japan connected the ball through MORISHITA Ryoya and Mitoma, before Hatate struck a shot, but his attempt was saved by the goalkeeper. Konno tried his luck in the 40th minute, but his shot went over the cross bar. Just before the end of the first half, Hatate fired a terrific shot that got the crowd on their feet, but once again, fell short from capturing the opposing goal. Despite the continuous efforts made by the Japanese attackers, the match entered halftime scoreless.

The second half saw Korea Republic creating more chances, forcing Japan to be in the defensive end more often. However, as Hatate later reflected, “we knew that the opponents were going to apply more pressure in the second half,” Japan kept their composure to make the adjustments on the field. While shielding off the attacks initiated by the opponents, Japan continued to make their efforts to break the deadlock. Japan came close to taking the lead in two occasions, as Mitoma and UEDA Ayase both shook the net, but both plays were called back with offsides. In the 78th minute, Mitoma, Hatate, and YAMAMOTO Yuki combined well in the central area to break through, but Mitoma’s shot went wide of the goal.

The long-awaited moment came in the 79th minute, when the ball was passed from Yamamoto to Mitoma, before the final pass was delivered to Hatate. The Japanese striker fired a shot from no angle that pierced the near post to give Japan the lead. Following this goal, Hatate was replaced by OGASHIWA Tsuyoshi, who provided fresh legs upfront for Japan. In the 87th minute, Ogashiwa utilised his speed to broke through the open space and captured the second goal for Japan. The heated battle between the two Asian sides ended with Japan paying back their loss they suffered in Spring to advance to the semi-finals. 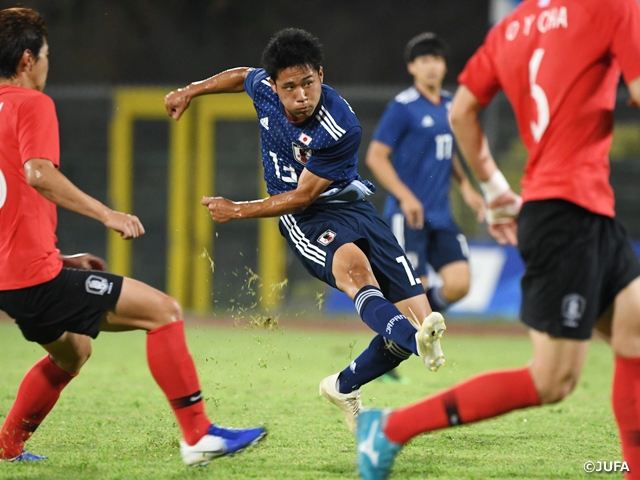 The Japan Universiade National Team will now face the host nation, Italy, at the semi-finals scheduled to take place on Thursday 11 July at 21:00 local time.

MATSUMOTO Naoya, Coach (Momoyama Gakuin University)
The players played very well. Winning the individual battles are essential when facing Korea Republic, and we certainly didn’t lose those battles today. Our players kept their focus from the start of the match and defended as a team while creating numbers of opportunities upfront. We could’ve made this match much easier if we managed to score the goals earlier, but with this being a match against Korea Republic, it didn’t go as easily as we hoped. With this being his third straight start, Hatate looked fatigued, but just as we were getting the substitute ready, he scored that goal. He certainly proved why he is the captain of this team. The reserve players have also earned great results within the limited playing time. That second goal scored by Ogashiwa was huge for us. Winning the title by defeating Korea Republic and the host nation, Italy, is our initial scenario we drew up for this tournament. We are advancing through the tournament as we planned, so we hope to prepare ourselves thoroughly ahead of the semi-finals.

MF #7 MITOMA Kaoru (University of Tsukuba)
Winning the match was our top priority, so despite it being a tough match, I am glad we were able to come up with the victory. When facing Korea Republic, we had to focus on winning the individual battles while trying not to concede too many set-plays to our opponent. We might have committed too many fouls, but we managed to execute our game plan, so we should be proud of that aspect. I am always paying attention on where Hatate is going, and when he scored the opening goal, I knew he was making that diagonal run. I am just thankful that he was able to score from that difficult angle. After winning the previous tournament, I am expecting our team to win this tournament as well. As the two players who have experienced the last tournament, Hatate and I have the responsibility to showcase our leadership in this team.

FW #10 HATATE Reo (Juntendo University)
Korea Republic showed great persistency in front of their goal, so I knew it would be hard to score goals against them. However, our team also showed great patience to create numbers of opportunities. In the goal scene, I had almost no angle when I received the ball from Mitoma, but I thought I can try hitting the upper corner of the near post and struck the shot with everything I’ve got. I saw Ogashiwa getting ready to come into the match, and I knew I would be subbed off, so I was fully committed to make that final effort to score a goal and I’m glad it worked out. We will now face Italy and despite the match being a complete away game, we will continue to showcase our football to win the match.

FW #13 OGASHIWA Tsuyoshi (Meiji University)
I knew there would be a chance for me. When the ball came towards me, I took a glance at the goal before striking the shot. I am glad I was able to score that goal. I will actively take shots against Italy at the semi-finals to help the team win the match.