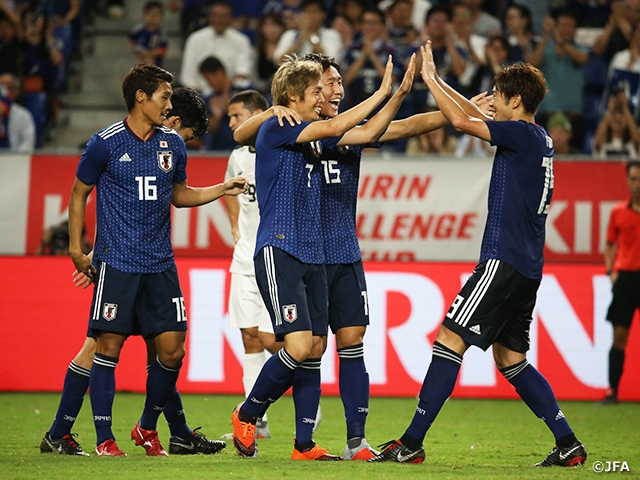 On Tuesday 11 September, the SAMURAI BLUE (Japan National Team) faced the Costa Rica National Team in the KIRIN CHALLENGE CUP 2018 at Panasonic Stadium Suita, Osaka. With goals scored by MINAMINO Takumi (FC Red Bull Salzburg), who has returned to the national team for the first time in three years, and ITO Junya (Kashiwa Reysol), the team won their first match under the helm of Coach MORIYASU Hajime, with a score of 3-0.

With their match against the Chile National Team being cancelled due to the Hokkaido Eastern Iburi Earthquake, the SAMURAI BLUE took their first step towards the FIFA World Cup Qatar, after reaching the round of 16 at this summer’s World Cup Russia.

The team entered the match with a 4-4-2 formation where NAKAJIMA Shoya (Portimonense S.C.), Doan, and Minamino excelled at the match to display new possibilities for the Japan National Team. 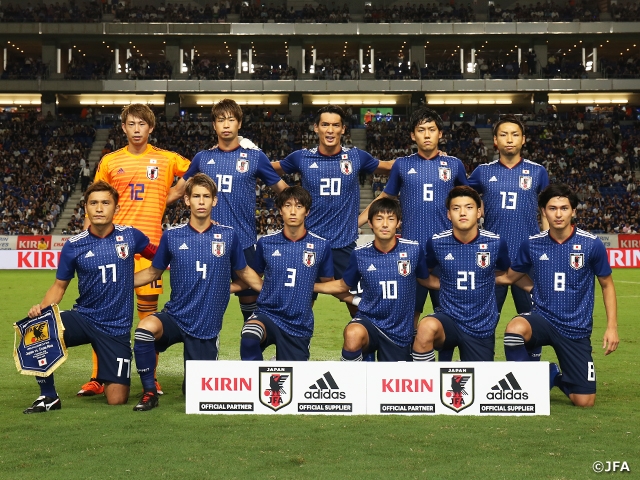 Before the match, a moment of silence was held to honour the lives lost in the recent natural disasters that struck various regions of Japan. Once the match started, Japan displayed an aggressive approach to take the initiative. The team successfully scored the opening goal in the 16th minute when Nakajima delivered a corner kick from the right side, allowing Sasaki to redirect the ball towards the near post. The flicked ball bounced off a Costa Rican defender before finding the back of the net to give Japan the early lead.

Japan continued to threaten the opposing goal as Nakajima struck a shot in the 21st minute, followed by another attempt made by Nakajima in the 24th minute. Minamino also came close to scoring in the 39th minute, when he fired a shot after KOBAYASHI Yu (Kawasaki Frontale) laid the ball down for him.

Following their 0-2 defeat to Korea Republic on Friday 7 September, where the team employed a four-back system, the team changed their formation to a five-back system while rotating six players from their starting line-up from the previous match. The team featured five members who played in the recent World Cup as midfielder Randall LEAL initiated their attacks to utilise the two stickers David RAMIREZ and Mayron GEORGE.

Costa Rica created an opportunity in the 12th minute when Leal penetrated the Japanese penalty area, followed by a long-range effort made by Bryan OVIEDO in the 29th minute. However, led by their goalkeeper Higashiguchi, the Japanese defence line denied the chances created by the Central American side.

While carrying their one goal lead into halftime, Japan created more opportunities in the second half as the players showcased well timed combinations to seek for their second goal.

It was Nakajima who led the attacks for Japan as he struck a shot himself in the 51st minute, followed by delivering a cross to Minamino in the 57th minute. He initiated an opportunity in the 60th minute by taking on a defender in the left flank before sending the ball to Kobayashi, who delivered the final pass to allow Doan to launch a looping shot at goal, but his attempt was blocked by the opposing defender.

Japan’s second goal came in the 66th minute when Endo broke through the left side before cutting back the ball to the centre, where Minamino awaited to strike the ball into the net with his left foot. For Minamino, this was his first national team appearance since November 2015 and in his third cap of his career he managed to mark his first goal for the national team. 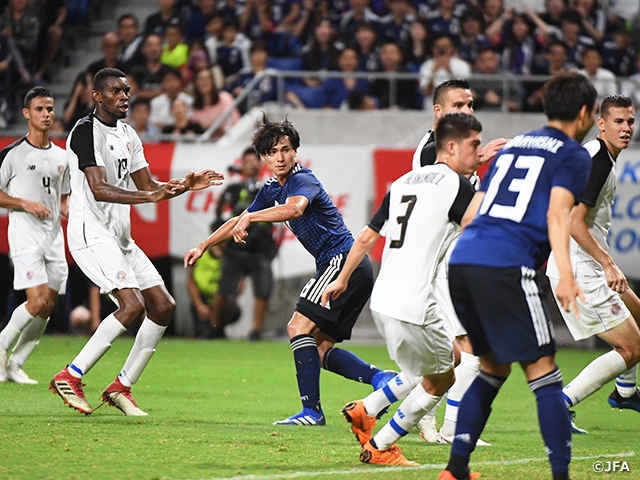 Coach Moriyasu did not loosen their attacks as he made numbers of substitutions to bring in ASANO Takuma (Hannover 96), Amano, KURUMAYA Shintaro (Kawasaki Frontale), Morita, Ito, and MISAO Kento (Kashima Antlers) on to the pitch.

In the closing minutes of the second half, Ito penetrated the right side before firing a right footed shot to mark his first national team goal, giving Japan a 3-0 victory in their first match of the new regime.

MORIYASU Hajime, Coach of SAMURAI BLUE (Japan National Team)
We are glad that we were able to showcase a persistent effort to win the match in front of many people who has been affected by the recent natural disasters all around the nation. Our team was also affected by the earthquake while we were in Sapporo, as the team did everything within their power to overcome the situation, and we entered this match to express our gratitude towards everybody who has supported us. The players did a great job to communicate with each other and played to the fullest potential to display their strengths, while executing the team’s game plan. I have stressed the concept that allowing your peers play to their fullest, will directly help yourself play to your full potential, and the players materialised that concept on the pitch today. The team fought aggressively in defence and showcased a seamless transition to initiate their attacks while keeping a clean sheet. However, the team needs to heighten the quality of their plays in the final third to score more goals. We must also strengthen our defence to give out less opportunities to our opponents. Everyone must continue to think of ways to improve the overall quality of the team and give the team the best chance possible to win the match.

DF #20 MAKINO Tomoaki (Urawa Red Diamonds)
Everything we worked on during our training sessions were materialised in this match including the goal scenes. This was made possible because everyone gave all they’ve got in this match. This result and performance must have altered the players who played in the World Cup in Russia. The performance was much better than what the final score indicates and gave great confidence to those young players as well as the players playing in the domestic leagues.

MF #10 NAKAJIMA Shoya (Portimonense S.C.)
My teammates showed great support and it was a very entertaining match. I knew I was expected to initiate the team’s attacks, so I entered the match with the intention to take my chances aggressively. This team has just taken its first step and there are many other talented players yet to be featured. I hope we can continue to work hard and inspire each other to improve ourselves.

MF #17 AOYAMA Toshihiro (Sanfrecce Hiroshima)
The players upfront did a great job to carry the ball while the defenders maintained a well organised defence line with high alert and we created great attacks. The team consists players with great characters and the earthquake has strengthened our bond as a team. I haven’t done anything to prove myself as the team captain, but I hope to showcase a worthy performance from now on.

MF #21 DOAN Ritsu (FC Groningen)
I was very nervous and entered the match thinking this would be a great experience for me. My overall performance was oaky, but I couldn’t score a goal, so that’s something I am regretting. I got used to the pace of the match in the second half and saw opportunities to exploit the open space but couldn’t score a goal. It was an entertaining 85 minutes and I feel like I was able to showcase how much I have improved as a player.

Ronald GONZALEZ, Coach (Costa Rica National Team)
It was a very difficult match. After their match against the Chile National Team was cancelled, Japan were much fresher and more eager to play the match. They showcased more aggression and played with great speed. In efforts to level the match, we changed our system in the second half, but conversely conceded two more goals. Japan deserved to win this match and they managed to take their first step in great fashion.