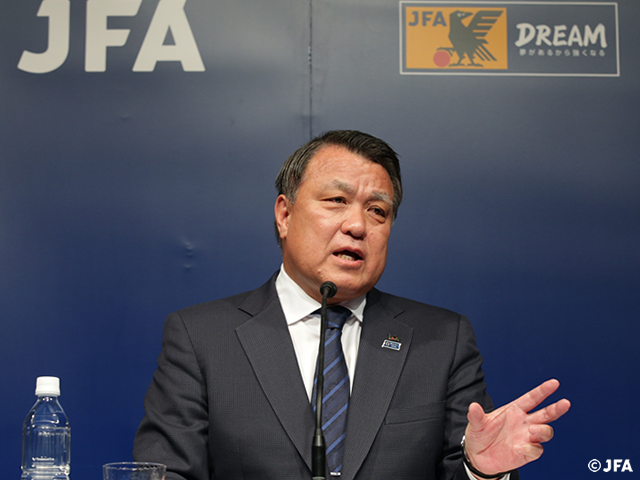 As of 7 April, JFA has terminated the contract with Coach Vahid Halilhodzic.

Following the termination of Coach Aguirre, Coach Halilhodzic consented to undertake the position of the Head Coach of Japan National Team in a short period of time. Over the past three years he has helped the SAMURAI BLUE to evolve as a team, and led the team to achieve its goal of qualifying for the FIFA World Cup. He offered us with his diligence, passion for football, and strong enthusiasm to make Japan a better team. He has also aimed the focal point on the concept of “Duel” to strengthen the players’ attitude at international stages, and we thank all his work.

We do not base our decisions on results of few matches nor do we make decisions based on public opinions. We have faced difficult situations many times before, and made our decisions comprehensively to proceed our path with Coach Halilhodzic to further strengthen the team and strive for greatness at the World Cup in Russia.

However, after the match against Ukraine on 27 March, it was evident that he and his players were in a situation where they lacked mutual-trust and communication. The JFA Board Members, the Technical Commitee, and other members involved could not take this lightly, ultimately leading to this decision after close consultation.

A “strong team” who competes among the world’s best must not lack trust between its coach and the players. The possibility that our team lacking such quality came to light during the trip in Belgium. It was an extremely difficult decision to make, but in order to put our team in a better position to achieve greatness at the World Cup, even if it meant to improve our chances by a mere 1% or 2%, we felt like this was the right decision. We strongly believe that this change was necessary to showcase the Japanese football and achieve good results at the World Cup.

Mr. NISHINO Akira will undertake the position as the new coach. Ever since his appointment as Technical Director, Mr. Nishino has been the closest person to observe the SAMURAI BLUE. His experience and qualification is without a doubt trustworthy, as he has coached Kashiwa Reysol, Gamba Osaka, and the U-23 Japan National Team, while leading Gamba Osaka to win the AFC Champions League.

Many people has questioned our timing of this decision, but we have always considered the risks involved in changing the coach, as well as the risks of not making the change. It is because we are at this stage following the Belgium trip in March, we have concluded to appoint Mr. Nishino, who knows about the current SAMURAI BLUE more than anyone. I strongly believe that the coach, players, and staffs will work together as a team to display the team’s ability to the fullest.

We will now migrate to a new system, but we will give our utmost effort to make this transition as smooth as possible. What we must do now is to unite the Japanese football community as one, and support the coach, players, staffs, and everybody who are involved, so that the team can perform 120% at the World Cup.

I believe it is now, where we must gather all of our wisdom accumulated within the Japanese football community over the past years.

I know we are making many of you at unease, but we would like to live up to the strong passion of all the fans, supporters, registered Football Family of JFA, sponsors of the Japan National Team, and everybody involved in the media.