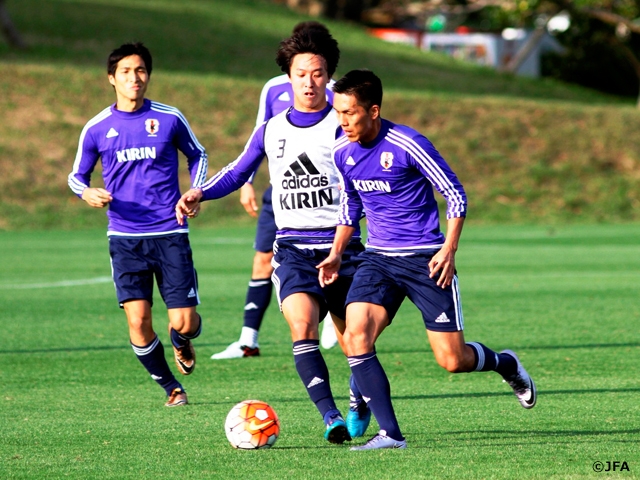 U-22 Japan National Team had the 8th day of their training camp in Ishigaki Island.

The team held one practice session in the morning and another in the afternoon on 29 December under short sunny spells for first time in a long while. In the morning, they did some speed-focused training with less physical pressure compared to the one in the fitness training session. Then the players moved onto passing and controlling, followed by possession practice in attack as well as in defence. They finished the morning session by practicing the tactics used to go from formations to taking shots.

In the afternoon, the players started with a warm-up, and moved onto passing and controlling, followed by a nine-a-side possession practice with four servers. Then they played a practice match. The players put in an exciting performances throughout the 54-minite game, and substituted many players.

At the beginning, the midfielder OHSHIMA Ryota struck the opener. Then more shots followed. The defender UEDA Naomichi headed home and the forward ONAIWU Ado also scored from a header off the midfielder TOYOKAWA Yuta’s corner kick. The forward KUBO Yuya and the defender IWANAMI Takuya found the back of the net before the final whistle as well. During the 54-minute game, all the players displayed their achievements at this camp as well as their aims for the Olympics qualifiers.

During dinner, the coach TEGURAMORI Makoto encouraged the players to finish the eighth day: "tomorrow will be the last day of this camp. We want to finish this year with a good training session for the coming year. There has been a good atmosphere at all the sessions. Let’s stay focused for one more day right up to the end, and have a happy new year."

The last day of the camp on 30 December will see a morning practice session before the team is dismissed. The remaining two players for the final qualifiers will be announced after the coach Teguramori arrives at Haneda Airport. 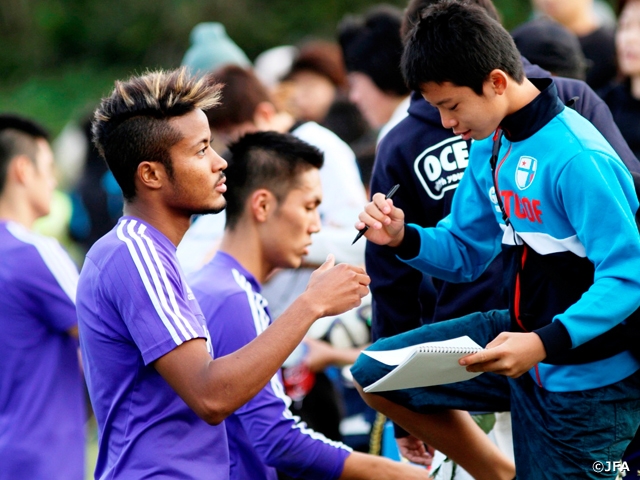 TEGURAMORI Makoto, Coach
Today’s practice match went as I expected. Although there was still some room to improve on the details, the game showed the players’ excitement and sense of responsibility in playing for the national team. I believe the atmosphere of the team got even better. The players performed honestly to encourage each other. We’ll improve ourselves step by step – planning for six games before the final of the AFC U-23 Championship, learning the importance of the opening match, and aiming to top the group in the group stage. We’re not there yet. But we’ll gradually adjust ourselves in 10 days in Qatar.

DF  MATSUBARA Ken (Albirex Niigata)
It was good that I could score through a set piece in today’s practice game. The unity of the team has been getting stronger and stronger everyday with a determination to book a place at the Olympics. We know from the beginning that we have to stay competitive and we understand the coach wants us to perform as well as possible whatever position we play. I can contribute to attacks from the wings in a timely manner, communicating better with the players in the centre. Having said that, as there is still room to improve, I’d like to fix problems before the final qualifiers. I believe that we can win, if we’re determined to earn a place at the Olympics.

DF  NARA Tatsuki (F.C. Tokyo)
I joined the training camp in the later stage, and the other players told me it had been quite tough. Although they actually seemed to be tired, all of them performed well with spirit in today’s practice game. I think it was a productive training camp. It was good that I could play in such a way that I could seek to improve my individual problems.

However, as the defensive line has to control the team, I’d like to cooperate more with my teammates in coaching as well as line controlling. Just like the Qatar, UAE trip, there’re still problems to be fixed, and we can’t win a match if the team stays the same as today’s practice game.

All 23 selected players must have high motivation in order to win the AFC U-23 Championship. We’ll only have a very limited opportunity to display Japanese playing style in games. How much you can physically commit may decide a match. So it’s vital to play without much fear.

DF  ANZAI Kazuki (Tokyo Verdy)
I don’t think I showed off my strength well enough in the practice game. However, I contributed to our limited goal-scoring opportunities. As the season was over in November, the training camp was a little tough for my body at the beginning. I gradually got myself in a good condition, and spent the week well. I am playing with the players here for the first time in a while. I think the atmosphere got even better.

MF  TOYOKAWA Yuta (Kashima Antlers)
Although I assisted a goal in the practice game, my team couldn’t play well. Having said that, I’m quite positive that each individual displayed his ability. I’ve done what I could do to be chosen as one of the remaining two players for the final qualifiers. It was a very productive training camp, as I could improve myself in a good atmosphere among the team for a week. 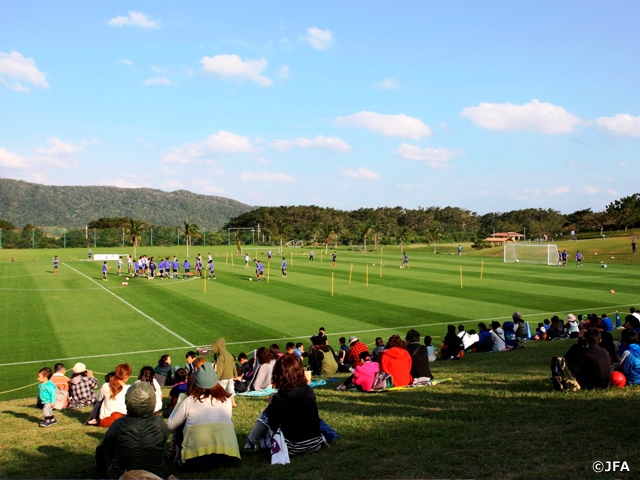