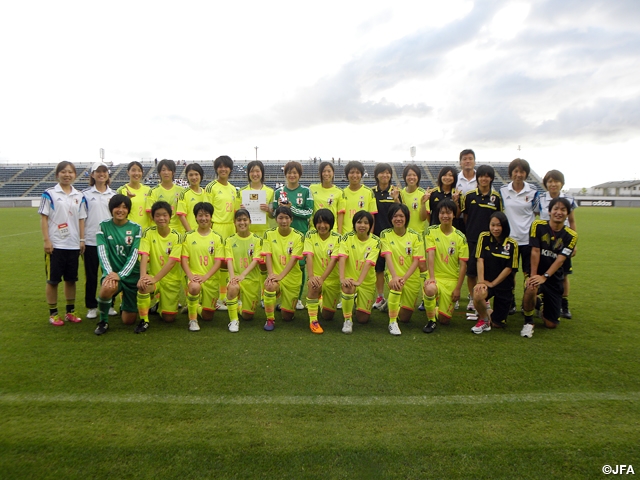 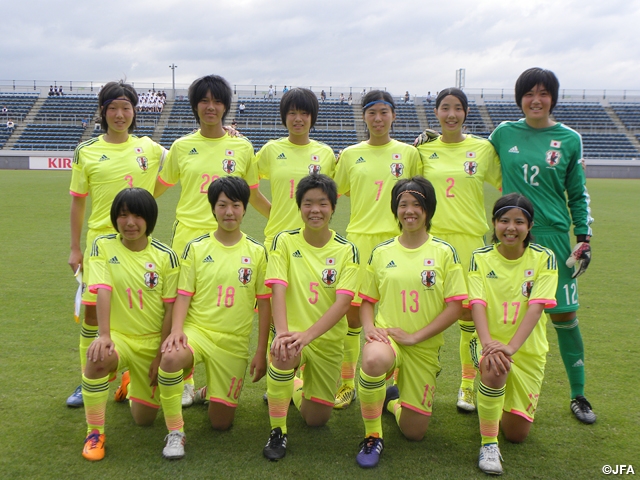 Japan national Under-18 team played their third match against the selective Under-18 squad of Osaka Prefecture with the tournament title at stake.
Due to the eight typhoon of the year approaching, the kickoff time was pushed forward.

The match began at 4 p.m. kicked off by Japan. Japan struggled to take the momentum early on, but eventually got their own rhythm creating offensive chances. On 13th minute, Miura Narumi (NTV Menina), who took off to create a space capitalizing on a one-two pass play with Sugita Hina (Fujieda Junshin High School), fired a shot but it was saved by the opponents' goalkeeper. Yet on 24th, an opposing defender attempted to clear a Miura cross from the left side, but it went into the goal mouth to give Japan the game's first score. On 26th, Anzai Yuka (JEF United Ichihara Chiba Ladies Under-18) dribbled in the left side and took a shot for the second goal. On 30th, Mizutani Yuki (JFA Academy Fukushima) received a pass in the box and fired a shot, dodging a defender. She netted it and Japan entered halftime with a 3-0 lead.
As a sunlight came in from between thick clouds, Japan entered the second half, substituting five of their players. On 44th minute, Seike Kiko (Urawa Reds Ladies Youth), who came in as a substitute, got a pass before the goal and put it into the net for the fourth goal. Japan would not go loose afterwards and added a pair of more goals on 51st and 55th. Japan capped a 6-0 win in the end and earned the tournament championship. 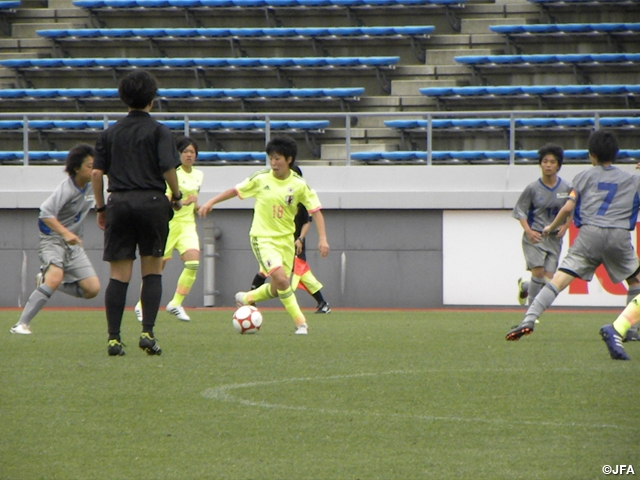 TAKAKURA Asako, Head Coach
As we played our third match, each of us entered it with her own issues to correct both offensively and defensively. Our players talked to each other well, trying to resolving their issues on their own and develop their play qualities, in various situations in the match. Now when they go back to their own clubs, I want them to elaborate their individual judgements and qualities to make further progress.

HAZA Hisui（Nippon Sport Science University）
I think that we were able to have better communication and have better chemistry and line controls than in our first two matches. Yet we still left some issues as we made some passing mistakes and weren't perfectly on the same page. As we are going back to our clubs, I would like to correct those issues that I found through the training amp and raise the bar. This time, since I was one of the oldest, I was in charge of being the captain. But I don't think I could really guide the team, so I would like to make growth so I can lead with my plays and character.

ANZAI Yuka（JEF United Chiba Ladies U-18）
We didn't enter the game in a way we wanted it to be and struggled to play in our fashion early on. But we were gradually able to move our players and ball to create some opportunities. Personally, it was good that I scored a goal after dribbling, but there were some occasion that I was too slow on making decisions and left so many issues. When I return to my club, I would like to overcome these issues, capitalizing on these experiences of this time.

ENDO Yu（Urawa Reds Ladies Youth）
It was my first time with the Under-18 national team and I had a lot of anxieties, but after all, I think I could showcase myself both in the practices and games. My teammates were all kind and have so many things that I can respect and learn. Now I am bringing back what I learned through the training camp to my club, and I hope to stimulate my teammates with my development.

MORITA Umi（JFA Academy Fukushima）
It was the final match in our training camp. As a whole, each one of us was able to get the ball and scored shots from our collective plays. I think that we could exhibit everything we've worked on in this game. Individually, I was disappointed that I couldn't make the starting team, so I would like to make it as my motivation for the next one.

MIURA Narumi（Nippon TV Menina）
I got to played as a left side half. We didn't fully capitalize on the variety of our offence in our first match against South Korea, so it was one of the things we were aware of. It was great that we were able to show some one-two plays and making a lot of passes that would lead to scoring by using the pitch widely. Defensively, I was aware of being in neutral positions, but I still struggled to do this, so hopefully I can correct it. Because I found so many issues, I want to make them up when I go back to my team. Overall I got to be able to absorb so many things by playing in the high-level circumstances, and it was fun.