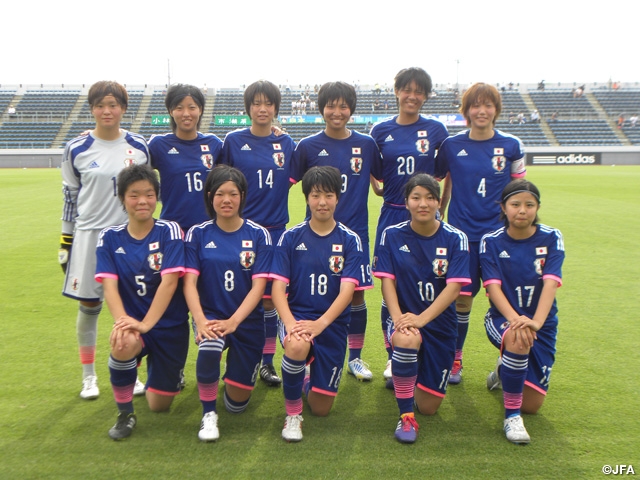 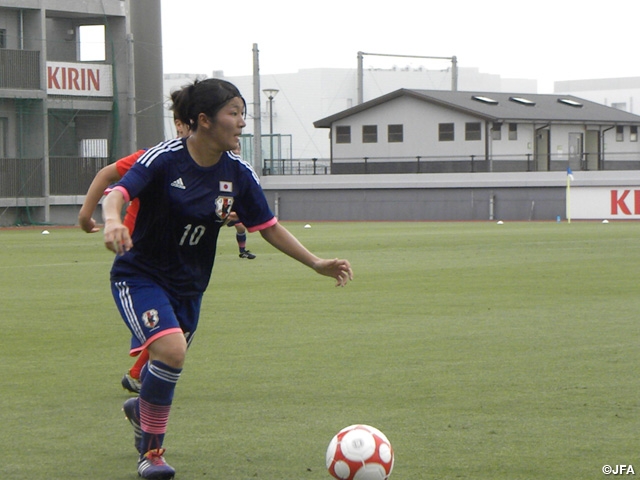 On Day 2 since the team was assembled, the Japan Under-18 national team played their first game of the tournament against South Korea.
Japan coach Takakura sent her squad to the pitch, with the words: ``The team just started to move, but put up what each of you have on the pitch with high concentration.''

The match kicked off by South Korea. Japan dominated the pitch around their attacks from their left side early on. On 11th minute, Seike Kiko (Urawa Reds Ladies) reacted to a cross from Takemura Misaki (Hinomoto Gakuen High School) and put it into the net to give Japan a 1-0 lead.
That goal even boosted the Japan squad and they added a few more afterwards.
On 20th, Seike, who this time received a pass from Miura Narumi (NTV Menina), scored another. Japan gave up a goal to South Korea, who made it with a looper on 27th minute. But on 34th, Seike volleyed a cross from Takemura for her third goal. A minute later, Shiraki Akari received a pass before the goal and netted it to make the score 4-1 in the first half.
Japan entered the latter half, having replaced four players. Although they allowed another goal to the opponents, Japan would not loosen their offensive attacks. On 64th, Toriumi Yuka (NTV Menina), who came in the match as a substitute, got the ball in the ball in the middle of the field, dribbled it and fired a shot. She netted it for the team's fifth goal. Japan added a couple more on 70th and 83rd minutes to make it 7-2. They earned a victory in their first contest of the tournament. 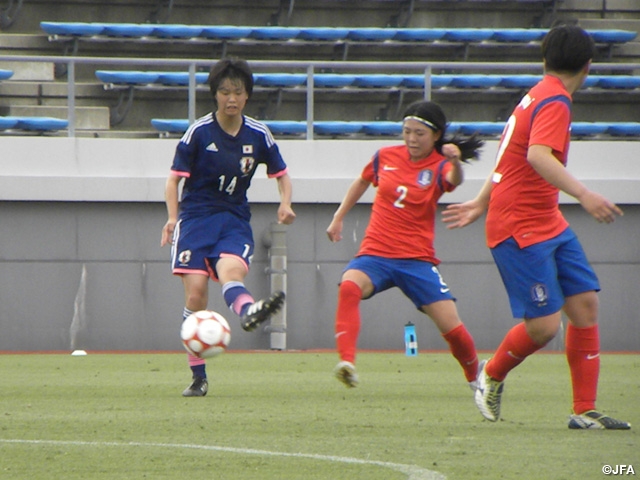 TAKAKURA Asako, Head Coach
I think that it was great for the Japan Under-18 team to come up with a win. Many of our players played on this team for the first time and we have got a long way regarding our linkage with each other and fast attacks, both defensively and offensively. But we showed our chemistry and attitudes in trying to be on the same page in what we were trying to do. Hopefully, in the remaining two matches, we would like to find this team's color and bring out the strengths in each player.

NORIMATSU Ruka（Urawa Reds Ladies）
It was my first match in this category. I know I have a lot of issues to improve on, but I think that I was able to have a good game, communicating with teammates. Our opponents played conservatively, making blocks defensively, in the first half, but they pressed in the front in the second half. I feel that I have to be more cunning, observing the opponents and situations. We posted a rout, but we gave up two goals in similar fashions and that's the biggest issue from today. I think that it'd be better for us to observe what's going wrong and fix them during a match, and share them with teammates. We have another game to play tomorrow, so we would like to try so many things while we also want to develop our chemistry, which is Japan's strength.

SEIKE Kiko（Urawa Reds Ladies Youth）
I thought that I would be nervous, but entered the match more relaxed that I thought and it was good. I was able to score three goals personally, but I could have created more chances, so I want to play better in our next match than today's. As the team, too, I think we can do more, so in order to get better, we would like to play collectively.

TAKEMURA Misaki（Hinomoto Gakuen High School）
Since I was chosen for the national team for the first time and am playing with majority of the players that I'd never been on the same teams, so I'm working on my training trying to establish communications. I was a little nervous in today's match, but I could enjoy playing and it was great that I could provide a lot of assists in our offensive attacks. We also found some issues, and would like to keep getting my condition for our training and matches from tomorrow as well.

TORIUMI Yuka（Nippon TV Menina）
As I got to play in my first match for the Japan national Under-18 team, I was very nervous. And as I got to play the match, I was determined to put up my strengths no matter how much I would make mistakes. When I came in as a substitute, I entered the pitch thinking that I would try to score a goal. Our opponents seemed tired in the second half, and I thought that we would create some scoring opportunities if I kept getting myself behind their defensive line, and I got a great pass from Sugita and then was able to score winning a one-on-one situation with their goalkeeper. I had a few more chances, so it's important to firmly make them, and it is my issue to correct. We scored a lot of goals, but at the same time we had some things that we need to fix as a team and individuals, so we would like to improve so we can play better tomorrow than today.

SHIRAKI Akari（Tokiwagi Gakuen High School）
We could win with a score of 7-2, but we exposed so many issues both as a team and an individual after all. Individually, because I was aware too much of getting behind the opponents' defensive line, I would easily lose the ball when I got it. As the whole team, there were few occasion that we rotated the ball composedly, and we tended to have too simple offence. I think if we can hold the ball with our forwards, we will have more variations on our offence, so we would like to correct it so we can make progress as an individual and team.

ICHISE Nana（Tokiwagi Gakuen High School）
I was selected on this Japan national Under-18 team, but I got to acknowledge the gaps between me and other players, especially in decision making and speed for predicting on plays. As a team, we won 7-2, but with the two goals we gave up, we were too slow in making judges with our first defence. So we will need to make quicker situational decisions and have better instructions.