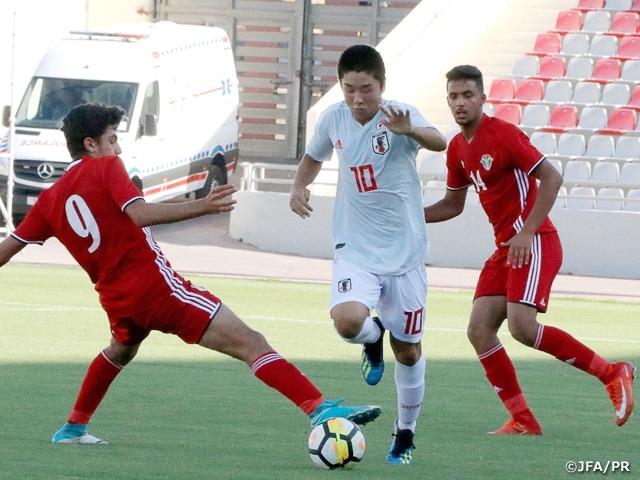 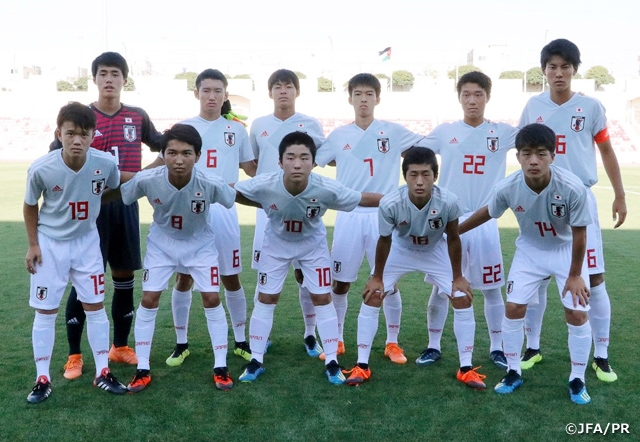 On Sunday 5 August, the U-16 Japan National Team earned a 3-2 victory over the host nation U-16 Jordan National Team in their third match of the 5th WAFF U-16 Championship 2018.

Reflecting on their second match against India, the Japanese team was tested to showcase, “Leadership from each player” and their “Intention to fight.” The players were sent off to the pitch with an encouragement, “Let’s attack aggressively from the very first second of the match,” but the Jordan side also entered the match with great intensity that matched the Japanese side. Both teams struggled to create a clear chance at the start of the match, but it was the Jordan side who scored the first goal. In the eighth minute, Jordan broke through the left side of the Japanese defence line and drove in a shot. The shot was deflected off a Japanese defender and gave Jordan a penalty kick. The host nation converted the spot kick to take the lead. This was the second consecutive match in which Japan gave up the opening goal to their opponent. In efforts to level the match, Japan created numerous shooting opportunities, which led to the play in the 31st minute. A shot taken by a Japanese player was blocked by a Jordanian defender who utilised his hand, giving Japan a penalty kick. Midfielder KONDO Kuraba calmly converted this opportunity to give Japan the equaliser. During this play, the defender who committed the foul was shown a red card and was sent off from the match, giving Japan a numerical advantage for the remainder of the match. Many opportunities were created by Japan after this goal, including the effort made by forward YOSHIDA Yuji who struck the goal post with his shot, but they failed to take the lead within the first half, sending the match into halftime with a score of 1-1.

During halftime, Coach MORIYAMA Yoshiro gave a pep-talk to his players, “We will attempt to score a goal within the first 10 minutes,” and the players responded to his words. In the 54th minute, Japan scored the go-ahead goal off a corner kick, where the opposing defender flicked the ball to Japanese defender HANDA Riku, who converted the opportunity with his header. Forward AOKI Yusuke scored a goal in the 64th minute, when he broke through the left flank before striking a powerful shot. The shot was initially blocked by the goalkeeper, but the ball carried enough momentum to find the back of the net to give Japan a 3-1 lead. Japan couldn’t find ways to score further goals after their third goal, and conversely, conceded a goal in additional time, when they gave up a freekick from a careless play. The Jordanian side capitalised on this opportunity by scoring a goal with a header to finish the match 3-2.

Despite winning the match, the Japanese side saw many aspects they must improve on, as they played with a numerical advantage for nearly 60 minutes but couldn’t close out the match in their favour. The U-16 Japan National Team will now face the U-16 Iraq National Team in their final match of the tournament on Thursday 9 August. 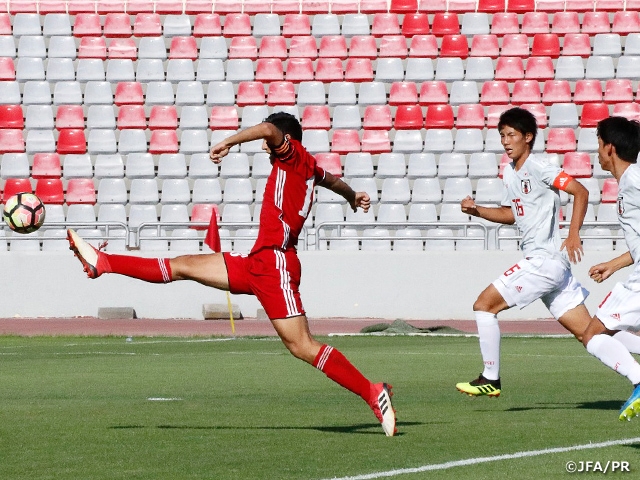 GK #1 SASAKI Masato (Kashiwa Reysol U-18)
Although we managed to win the match, we were scored on in the final minute, which left us with a bitter taste. In terms of defence, we gave up a penalty kick in the early minutes, while we conceded a goal from a set-play in the very last play of the match. It shows our weakness as well as our lack of alertness at the individual level. However, we did manage to come from behind and score three goals, despite our opponents being a player down, it’s still a positive result. This match made us realise that we must seriously make a change in order to win at the AFC U-16 Championship, so in our final match, we will make the necessary adjustments and win the match to build our confidence.

DF #16 SAKO Maaya (Tokyo Verdy Youth)
Despite winning the match, we showcased our weakness throughout the entire match. We were caught off guards in both offence and defence and left us with many things to worry about ahead of the AFC U-16 Championship, which serves as the World Cup’s final qualifiers of the Asian round. In our next match, and the next month and a half, we must seriously work hard to make the team better. In a way, it’s a good thing that we have realised that at this point. We must commit ourselves to make the necessary changes so that we can advance to the World Cup in the remaining month and a half.

MF #19 KONDO Kuraba (Cerezo Osaka U-18)
Today’s match showed that we still have long ways to go, despite the result. We must change our daily routines to compete at the world stage and must not take each day for granted. Today was really disappointing, so in the next month and a half ahead of the AFC U-16 Championship, I will work extremely hard to change my daily routines and become a player that is essential for the team.

FW #10 AOKI Yusuke (FC Tokyo U-18)
We played our third match after playing two very difficult matches. Although we won the match with a score of 3-2, our performance was not ideal. However, there were also positive aspects, such as the way we took control of the game in the first half, the fact we managed to come from behind to win the match, and at a personal level, the fact I managed to get involved in our goals. With that being said, we still must become able to adjust our plays with the game flow, fight even harder to win the ball, and to enter the match with a stronger intention to win the match. We still have long ways to go as a team and as an individual. We have very limited time, but we must work hard to improve ourselves within the given time frame. But for now, we will prepare ourselves for the next match so that we can win the title.

Three member associations of the WAFF (West Asian Football Federation), Jordan, Yemen, and Iraq will be joined by India and Japan.