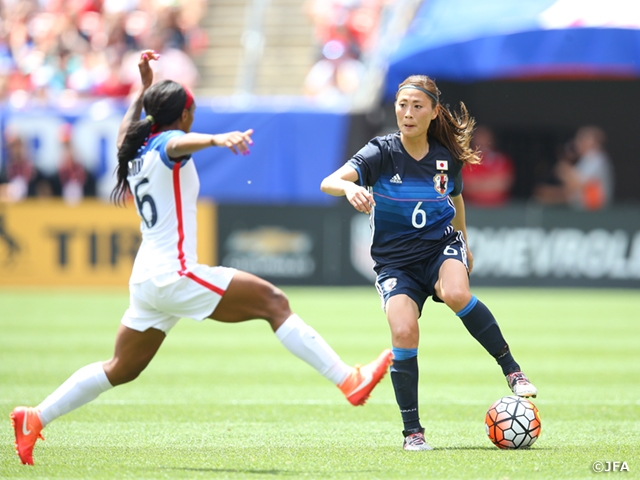 Japan drew with the USA 3-3 in the first match, and 23,535 people came to see the second match. Japan made significant changes to the team from the previous game, including YAMANE as a goalkeeper, UTSUGI, KUMAGAI, TAKAGI and KAWAMURA in the defensive line, SAKAGUCHI and NAKASATO at centre, MASUYA and SUGITA on the wings, IWABUCHI behind up front, and SUGASAWA as one forward. Japan tried hard to initiate attacks against the USA, who took shots from the beginning of the game.

In the eighth minute, although UTSUGI Rumi on the left sent the ball to SUGASAWA Yuika at the centre of the penalty area, she could not make a shot. In the 11th minute, IWABUCHI Mana, who ran to the space behind the opponent’s defenders, received the ball from SAKAGUCHI Mizuho, but could not take a shot, either. After 12 minutes, Japan earned a free kick near the right side of the penalty area. However, SUGITA Ami’s shot went over the bar. The game finally changed in the 27th minute. Japan failed to clear the ball from a free kick on the right side, which let the opponent initiate an attack. Julie Johnston, who ran towards a cross from the left, struck the opener. 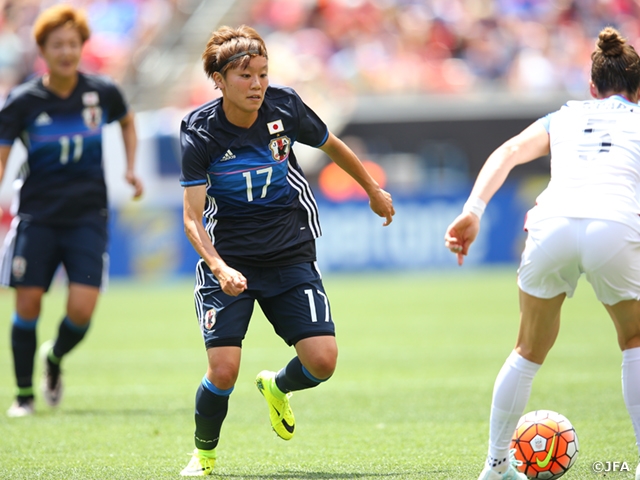 The game went into the second half at 1-0. CHIBA Sonoko and NAKAJIMA Emi came off the bench at the very beginning of the second half. IWABUCHI was moved up front, and was looking for goals. Although the goalkeeper YAMANE Erina had to face a 1-on-1 with the opponent’s forward in the 46th and 54th minutes, YAMANE saved them superbly. Japan were eager to impact the game, but after 62 minutes, Alex Morgan reacted to a cross from the right side to score a goal, building a two-goal lead. The match had to be called off in the 76th minute due to thunderstorm. The Fédération Internationale de Football Association (FIFA) will decide later whether this match was official or not.

TAKAKURA Asako, Coach
I think the players’ performance was a little unstable today in the face of pressure from the opponent. We conceded a goal from our mistake. That showed our current level. As we haven’t got enough technique or football understanding, we’d like to fix that in detail. We struck goals in a good manner in the first match, but it was a shame we couldn’t win the game. I feel frustrated that we couldn’t score at all today. We learned what we could do and what we could not. We’d like to keep cooperating both in attack and defence, so that each individual can improve herself, which will raise the level of the team even more.

GK ＃1  YAMANE Erina (JEF UNITED ICHIHARA CHIBA LADIES)
I could have played more aggressively to avoid conceding a goal in the first half. Even though the ball was intercepted while challenging, I can clear it, if I stay calm. I’d like to improve our problems and weaknesses as a team. It was very clear what we had to do. A never-giving-up attitude was more important than results. We’d like to challenge ourselves more, so that I can improve the team as well as myself.

MF ＃14  NAKASATO Yu (NIPPON TV BELEZA)
During these two games, I couldn’t play as usual – I was intercepted when I shouldn’t have been and I was not able to steal the ball due to the opponent’s defence. Having said that, as a player of Nadeshiko Japan, it was meaningful to experience speed and power, which I have never experienced before.

FW ＃11  SUGASAWA Yuika (JEF UNITED ICHIHARA CHIBA LADIES)
Throughout this trip, I have been thinking how to stay competitive against younger teammates, while trying to learn from more experienced ones. I’d like to learn as much as possible and pass that on to the young players. With better techniques, I believe we can raise the level of the team. As we found out what we can and cannot do, I’d like to improve on my particular problems back at my club. 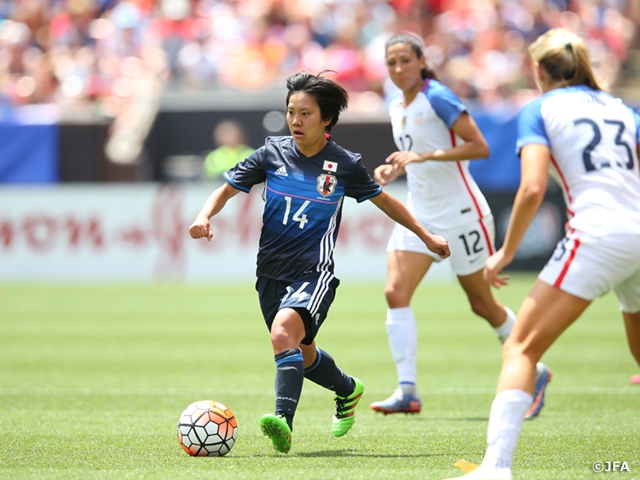