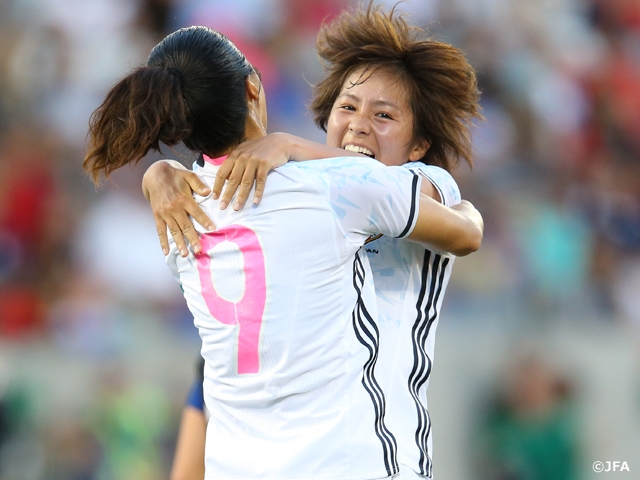 While the majority of the crown of 18,572 at the full-house stadium cheered for the U.S. team, Nadeshiko Japan got off to their new start. Japan had YAMASHITA as goalkeeper, SASAKI, KUMAGAI, MURAMATSU and ARIYOSHI at the defenders’ spots, UTSUGI and SAKAGUCHI in the middle, OGIMI and NAKAJIMA at the wings, CHIBA as the attacking midfielder and IWABUCHI as the one-top forward. Defender Sasaki Mayu and midfielder Chiba Sonoko made their international A match debut for Nadeshiko Japan.

The USA Women's National Team kept having corner kicks from early in the game, but Japan managed to survive them and then finally had a chance. In the 14th minute, forward Iwabuchi Mana received a pass from midfielder Sakaguchi Mizuho and dribbled up near the box. She fired a shot and it went in for a goal. For the moment the ball went in, the stadium got silent. In the 22nd, midfielder Nakajima Emi launched a cross and forward Ogimi Yuki put it into the goal to give Japan a 2-0 lead.

The USA Women's National Team started their rally afterwards. In the 27th minute, they attacked on the left side and Alex Morgan put a grounder cross into the goal. Japan's Nakajima fired a middle shot but it hit the cross bar and the game entered halftime.

In the 57th minute, Ogimi received her second yellow card of the day and was ejected. Japan were forced to play with 10 players. In the 64th, the USA tied the contest from a free kick. Japan then substituted Sasaki with midfielder NAKASATO Yu, who made her international A match debut.

Japan tried to find a way to attack, but the Americans held their attacks mostly. In the 89th, Lindsey Horan headed a cross from the left in to take a lead. But in the 94th minute, which was the stoppage time, forward YOKOYAMA Kumi, who came in as a late substitute, reacted to Sakaguchi's pass and scored. Japan and the USA ended in a 3-3 draw in their first game. 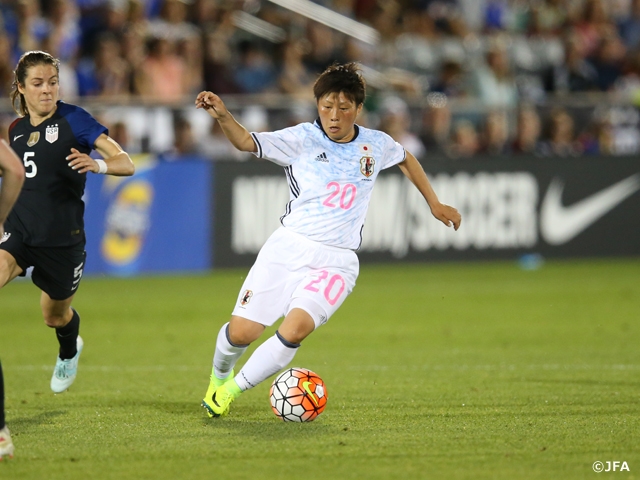 TAKAKURA Asako, Coach
We could’ve won the game. Our players played tenaciously, understanding what they needed to do in their short preparation time and trying what they can do very well. We still have things we will need to correct going forward. I have shown no indications that I’ve given any position to anyone yet, so I’m just having high expectations to many of our players.

MF ＃8  CHIBA Sonoko (AS HARIMA ALBION)
It was my first game (with the national team), but I wanted to contribute in some way, and it paid off that we scored from a combination play. Next time, I would like to attack more when I face forward. We’ve come over here all the way from Japan and would like to win for those who support us from Japan.

FW ＃20  YOKOYAMA Kumi (AC NAGANO PARCEIRO LADIES)
I got a good pass from Sakaguchi and I just needed to put it into. On the moment I touched the ball, I got 1-on-1 against the goalkeeper and it gave me a little nervous. Scoring goals is my job, but I felt I still need to work on other plays outside scoring. 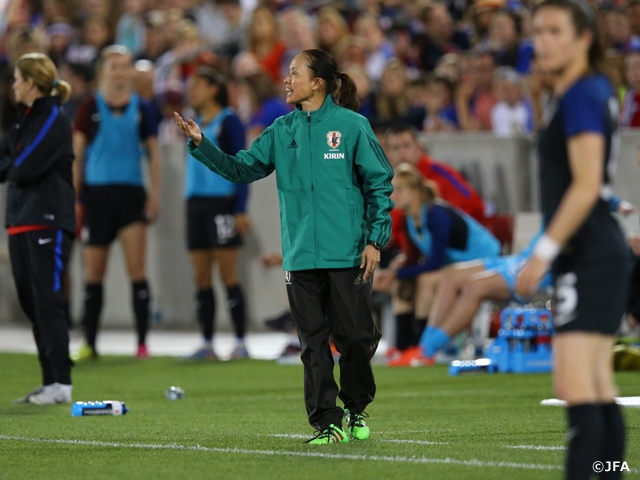