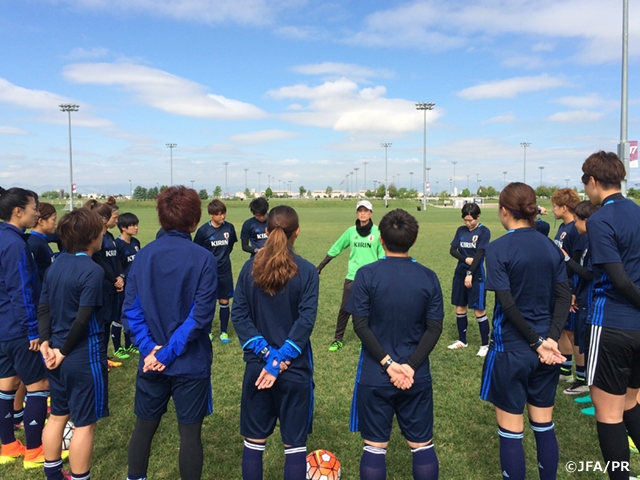 Nadeshiko Japan (Japan Women’s National Team) has launched their training in the USA on 31 May. The team will play an International Friendly Match against USA under the direction of the team’s new Coach TAKAKURA Asako who was appointed in April.

On 30 May, 20 Nadeshiko players including 5 new players arrived in Colorado where the first match against USA Women’s National Team will take place. State capital Denver, where they have both training and the match, is situated 1,600m above sea level, and it is known as a training place for marathon runners.

They started the training sessions in the morning of 31 May, and the first session was for body conditioning. After an ice breaking session, they had pass & control, and 8-on-8 + freeman sessions. They then played a 10-on-10 match to finish up the morning sessions. In the afternoon, they focused on defence and started the training with a 1-on-1 session. They gradually increased the number of players and they were required to improve the quality of their intense play and passing. In the end, they had 5-on-5 + goalkeeper. The total time of the afternoon sessions was 90 minutes.

Nadeshiko Japan will play the first International Friendly Match against USA Women’s National Team at Dick’s Sporting Goods Park on 2 June. The match will kick off at 19:30 (3 June, 22:30 in Japanese time). 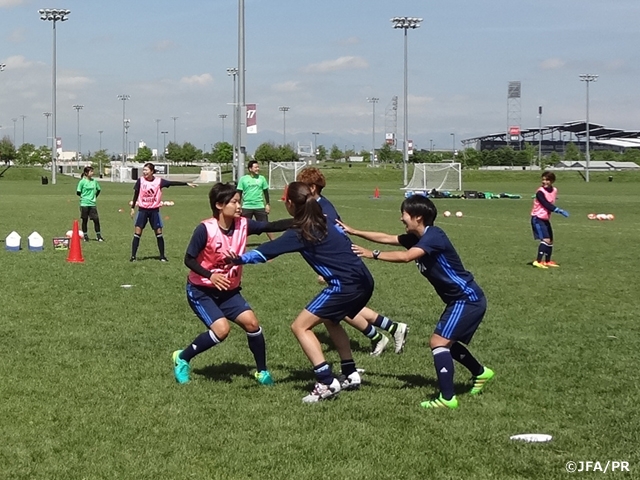 DF ＃4  KUMAGAI Saki (Olympique Lyonnais/France)
We don’t have a lot of time before the match, but we want to do as much as possible in this limited time. I want to improve the quality of what we can do such as stepping one or two steps further. I will also communicate with my teammates actively to understand each other better on the pitch.

MF ＃10  SAKAGUCHI Mizuho (NIPPON TV BELEZA)
In the afternoon, we had a 1-on-1 session again. It was an important session. I don’t want to lose the match against USA. I want to be the centre of the team being involved in the flow of our play a lot, and I want to see the level of our current team by playing against the USA.

MF ＃17  SUGITA Ami (IGA FOOTBALL CLUB KUNOICHI)
This time, I am joining in the whole of experience as a challenger. In the training, I want to show my play more than before. I have played against USA previously when I played for U-23, but this is a rare opportunity to play against them. I don’t know how much I can, but I want to maximise my advantage of dribbling well in the match.