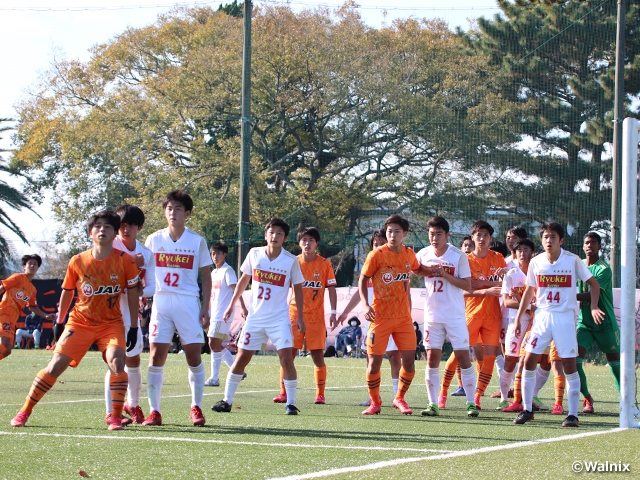 Shimizu will have to win this match and wait for the result of the first place team, Aomori Yamada High School (Aomori), in order to win the title. However, as KANEKO Seita (#7) later reflected, “Because it was a match with the title on the line, we looked a bit stiff, and couldn't showcase our usual performance in the first half,” the home side struggled to keep their composure and was unable to deploy their usual passing game.

Ryutsu Keizai Kashiwa on the other hand, started a line-up consisting of 10 second-year players and one first-year player, as coach ENOMOTO Masahiro explained the reason behind the young line-up, “Since we had some injured players, we decided to make the line-up mainly composed of second-year players, giving them the opportunity to make a case for themselves ahead of the All Japan High School Soccer Tournament.” OKAWA Kafu (#2), who was given the arm band for this match, mentioned, “In the past, many of us were dependent on the third-year players, so we focused on actively communicating with each other and keeping a positive vibe.” 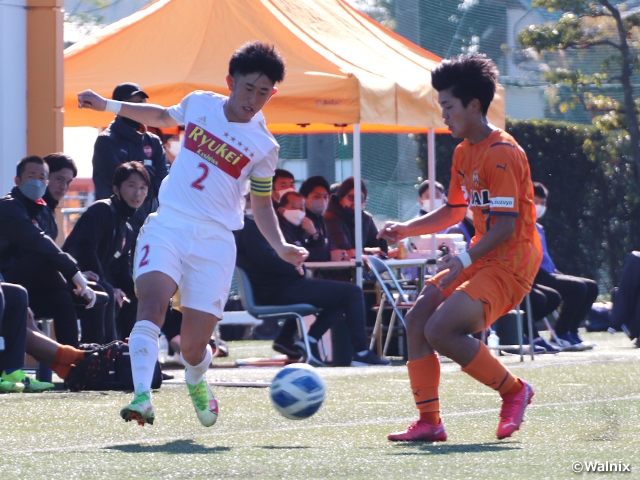 The deadlock was broken in the 66th minute, when Shimizu’s SAITO Yuzuki (#17) controlled the ball from a restart to setup the goal of Kaneko, who scored with a right footed shot. However, Ryutsu Keizai Kashiwa responded right away, as HAGIWARA Masaya (#15) converted the corner kick delivered by KONISHI Shuto (#42) to equalise the match in the 71st minute.

With both sides showing strong determination to win, the match continued to go back-and-forth, but neither side was able to score, as the match ended 1-1.

After seeing his side falling short from winning the title, Shimizu’s coach IWASHITA Jun reflected on the season, “This season has given us more depth as a team, and the players are now able to discuss and make decisions on their own. Also, I think the good thing about football is that at the end of the game you are taught how difficult it is.” Coach Enomoto of Ryutsu Keizai Kashiwa also shared his take on the match, “A draw on the road is not a bad result, but this match has taught our players that they need to always fight hard like they did today, in order to win matches. Because they are not guaranteed with a win, even when they run as hard as they did today.” 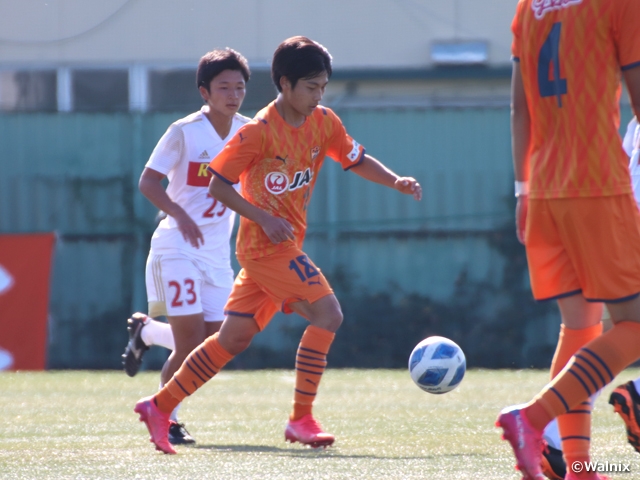 IWASHITA Jun, Coach (Shimizu S-Pulse Youth)
I wanted the players to focus on their own match, so I didn’t tell them how Aomori Yamada was doing. However, even though the players weren’t aware of the progress, they played as if they could win the title depending on the outcome of the other fixture, which led them to play defensively. It's a little disappointing, but it's very common in these kinds of situations. Looking back on the season, the two matches immediately following the hiatus, in which we lost and drew, turned out to haunt us at the end. However, the fact that we were able to be involved in the title race until the very end, gives us great confidence moving forward.

DF #3 KIKUCHI Shuta (Shimizu S-Pulse Youth)
We were not able to showcase our usual performance at all. We cannot win titles if we are affected by these kinds of pressured situations. Although I entered the match with the intention to enjoy the moment, the team looked stiff as a whole. Despite this result, I feel very grateful that we were able to playout the entire season this year, especially after seeing most of our matches getting cancelled due to the pandemic last year.

ENOMOTO Masahiro, Coach (Ryutsu Keizai University Kashiwa High School)
We lost to S-Pulse in the first leg, so we wanted to have our revenge this time. I also wanted to give the players the opportunity to make a case for themselves ahead of the All Japan High School Soccer Tournament. In that sense, a draw on the road is not a bad result. It was evident that we were able to return to our roots to improve our defence, but we had issues scoring goals. We would like to improve by the time of the All Japan High School Soccer Tournament so that we can have more players inside the penalty area.

DF #2 OKAWA Kafu (Ryutsu Keizai University Kashiwa High School)
Because we entered the match with a line-up mainly composed of second-year players, we focused on actively communicating with each other and keeping a positive vibe. However, we were positioning ourselves too deep, and played too passively. It would have been better if we could have used the width of the field more effectively and have our defensive midfielders more involved in our offence. The second-year students gained a lot of experience from this match, so we hope to work together with the third-year players to make the team stronger.

After taking the lead in the third minute, Aomori Yamada High School (Aomori) went onto score four goals in the first half, as they defeated Yokohama FC Youth (Kanagawa) to defend their Premier League EAST title. Urawa Red Diamonds Youth (Saitama), who is already set to be relegated to the Prince League, won over Funabashi Municipal High School (Chiba) with the goals of IZAWA Sohei (#9) and HORIUCHI Yota (#16) to finish the season on a high note. FC Tokyo U-18 (Tokyo) took the initiative of the match with the eighth minute goal scored by NOZAWA Leon (#18), earning a shutout victory over Omiya Ardija U18 (Saitama).

After entering the second half 1-1 against Ozu High School (Kumamoto) at home, NISHIMURA Hinata (#10) responded to a through ball sent by GOTO Keisuke (#23) to score the go-ahead goal that gave Jubilo Iwata U-18 (Shizuoka) their fifth win of the season. Gamba Osaka Youth (Osaka) scored five goals, including the brace of SAKAMOTO Isa (#11) to win over Kyoto Sanga FC U-18 (Kyoto) 5-2. Following a scoreless first half, TERASAKA Shogo (#19) and IKOMA Taiki (#13) each scored a goal to send Vissel Kobe U-18 (Hyogo) past Higashi Fukuoka High School (Fukuoka). Cerezo Osaka U-18 (Osaka) managed to come from behind to draw against Sagan Tosu U-18 (Tosu), thanks to the late equaliser scored by ITO Tsubasa (#13).