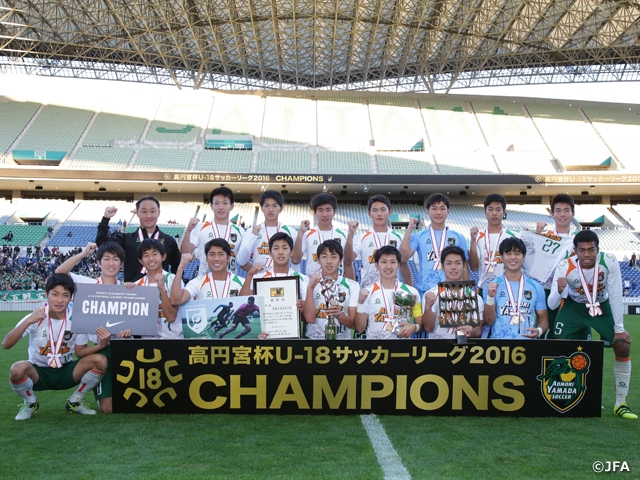 The championship playoff started in a uniquely tense atmosphere. Both teams performed calmly, focusing heavily on defence at the beginning of the match. Aomori Yamada initiated an attack first. In the 16th minute, NARUMI Akito, who reacted to a cross from KOYAMA Arata at left back, fired a shot. Although the shot did not go into the goal, Aomori Yamada got rid of some of the awkwardness in their performance. After 18 minutes, SAGA Riku got through on goal with a one-two with NARUMI, but his shot was parried away by the opponents’ goalkeeper. Although TAKAHASHI Issei reacted to a loose ball and slotted it into the goal, the shot was ruled offside. 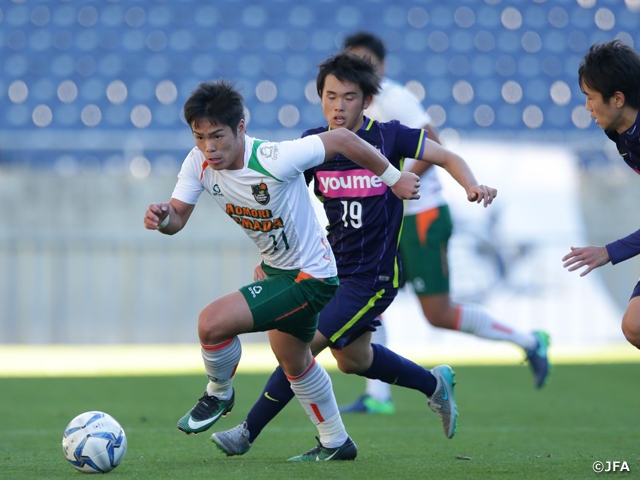 Being under pressure from the beginning of the match, Hiroshima started to finally show their strength in attack. In the 20th minute, SENBA Taishi skilfully headed a cross from MITSUTA Makoto, which went close to the goal. Then two minutes later, Hiroshima once again attempted a shot through a set piece. Using the full width of the pitch, they gradually gained control of the match.

The game went into the second half at 0-0. Right from the start, DANZAKI Riku of Aomori Yamada had to leave the pitch due to injury. Hiroshima, on the other hand, brought their momentum from the first half and continued to attack. Senba, Mitsuya, and YAMANE Towa, who wore number 10, threatened the opponents’ goal by moving freely and stringing passes up front. Aomori Yamada, however, showed a solid defensive block with four defenders and goalkeeper HIROSUE Riku and kept a clean sheet. 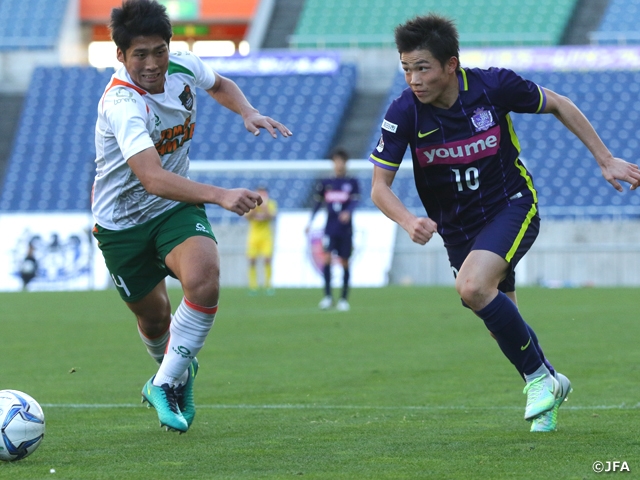 The score did not change within the 90 minutes, in which both of the teams performed tenaciously. The match went into overtime of 10-minute halves. Although Hiroshima had better possession of the ball, Aomori Yamada defended solidly with persistence. In the 18th minute of overtime, although KAWAI Ayumu, who had reacted to a through ball from RIKIYASU Shogo, sent an excellent ball towards the goal, OSANAI Shinichiro of Aomori Yamada intercepted it, displaying their ability to focus on defence.

Since overtime failed to find the winner, the game went to penalties. Aomori Yamada did slightly better than Hiroshima under pressure. As GOUKE Yuta later commented, ‘six kickers, including the one for sudden death, had been practising penalties thoroughly with coach KURODA Go for a few days’, the players calmly converted the spot kicks. All four kickers, including Hirosue, succeeded, while the first and the fourth of Hiroshima failed. Aomori Yamada won the game on penalties 4-2 and earned the Championship for the first time.

KURODA Go (Aomori Yamada High School)
I believe the players struggled physically, since we have had to move on a bus three weeks in a row since Matchday 17 of the Premier League. Having said that, they performed tenaciously as a united team. I’d also like to point out that the players succeeded in living up to the expectation as the representatives of the Eastern Japan and the All Japan High School Athletic Federation. The team had to use up stamina by reacting to Hiroshima’s plays widely using the pitch. However, we stayed focused and avoided conceding a goal by defending physically and not allowing any long-distance shots. The whole team performed their hardest without any careless mistakes throughout the game.

SUMINAGA Kakeru (Aomori Yamada High School)
Although the opponents had better possession of the ball, I stayed vocal: ‘let’s play patiently to keep a clean sheet as a united team.’ Winning this Championship has various meanings for us. We beat F.C. Tokyo U-18, who were aiming to clinch the third nationwide title, and earned a ticket to the championship match. I performed each play, thinking of other teams in the EAST. Becoming champions means a lot to me also. As we rewrote Aomori Yamada’s history, we all took this result very positively.

GOUKE Yuta (Aomori Yamada High School)
Since it was the very first time for me to win a nationwide championship, I felt everything, including the closing ceremony, has gone by in a second. I believe we managed to win the match thanks to the defenders and goalkeeper HIROSUE Riku. I struggled to intercept and had cramp for the first time during the match. However, I was very confident that we could win the game when it went to penalties. Having practised penalty kicks seriously after our usual training sessions for the past few days brought us this victory.

SAWADA Kentaro (Sanfrecce Hiroshima FC Youth)
It was a tough game and a difficult result in the end to accept. However, despite struggling in the middle of the first half, the players stayed patient. Either team could have won. As we created some goal-scoring opportunities, I’d like to say we displayed our style. By finishing in second place, we learned what needs to be improved. As there are still plenty of work to do, we’ll train hard and improve ourselves until we become strong enough to come back and win this championship.