Nagoya still kept hope alive to avoid the delegation, depending on the match result of Kobe Koryo Gakuen High School (Hyogo), who were three points ahead of them. As SUGAWARA Yukinari noted: ‘we’ve been preparing ourselves in the past week to throw everything into this match’, the team performed aggressively from the beginning of the match. Although forward MATSUOKA Jhonathan led the team to create goal-scoring opportunities, their strength in front line was not good enough. They only took one shot in the first half.

Higashi Fukuoka did not have many attempts at goal either, as MAESHIMA Masaya later noted: ‘we passed the ball around, but couldn’t get close to the goal.’ The match stayed scoreless at halftime. 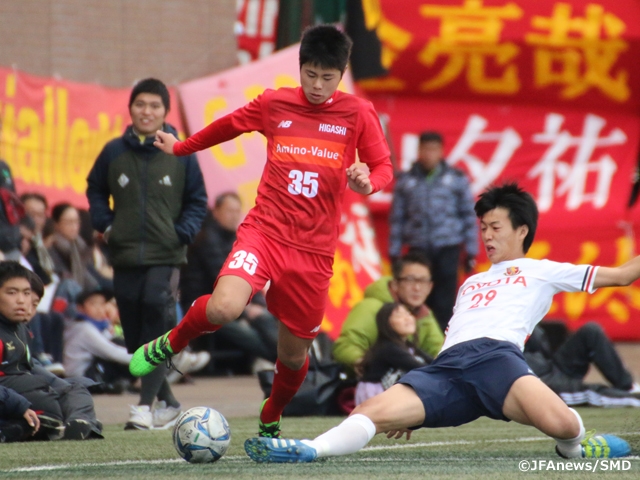 In the second half, Nagoya took the early imitative and attacked the opponents’ goal. The coach later commented: ‘I believed the beginning of the second half was a key for us.’ In the 55th minute, after stringing swift passes from a cleared ball on the left side, TANAKA Shoma fired a shot. However, Higashi Fukuoka’s goalkeeper, MAESHIMA Masaya calmly saved the goal.

In the 66th minute, Higashi Fukuoka created their goal-scoring opportunity. OHMORI Shingo, who reacted to a loose ball from a corner kick, slotted it into the goal and broke the tie. Thereafter, Higashi Fukuoka attacked firecely, seeking for additional goals in the remainder of the match. HIMENO Takaki received a pass from SATO Ryoga, who found the open space on the right side, and scored the second goal in the 87th minute. This was followed by TAKAE Reo’s shot, which was fired into the net directly from a free kick in the 89th minute, stretching their lead further. During injury time, Sato added another and Higashi Fukuoka won the game 4-0. As a result, Nagoya was relegated to the Prince League.

MORISHIGE Junya, Coach (Higashi Fukuoka High School)
Since Nagoya could have avoided relegation depending on the results of other teams, the players faced the match highly motivated. Oita last week showed strong determination to winning, because they had a chance to stay in the league if they managed to win the remaining macthes . We prepared ourselves just like we would play the knockout-stage games, which meant us a lot. It was a good experience in preparation for our next aim – winning the All Japan High School Soccer Tournament. Despite us having tasks that need to be improved, we achieved many today, which I believe led us to this result.

MAESHIMA Masaya (Higashi Fukuoka High School)
This match wouldn’t have impacted our final result, since we didn’t have the opportunity to win the League or be relegated. However, it was the last official game before the All Japan High School Soccer Tournament. We stayed highly motivated to be a united team. In the second half, the opponents managed to get through us. However, we made less careless mistakes, keeping a good atmosphere and maintaining our momentum by scoring goals. We showed our fighting spirit against a team, who were desperate to win, just like Oita Trinita U-18 (Oita) on the previous matchday.

YAMAZAKI Makoto, Coach (Nagoya Grampus U18)
Too much responsibility on the players made them nervous. Conceding goals impacted the game adversely. They improved after summer, but struggled to turn the game around today. Our problem seemed to be displayed in today’s game. I’d like to point out that the players performed hard and the staff supported them well. I am the one, who is responsible for this result. We’d like to fix our problems, one by one, to return to the Premier League in one year.

SUGAWARA Yukinari (Nagoya Grampus U18)
We were too desperate to win the game and couldn’t pay attention to the essentials, including the strength on the ball and pertinent basic skills. I think our weaknesses were displayed in the high-level Premier League this year. I was in shock when I heard the final whistle. However, I have to lead the team next year. I also feel determined to come back to this league in one year. That is the only thing we can do now. We’ll practice harder for the third graders, who felt devastated.

NAGASAWA Ryosuke of Vissel Kobe U-18 (Hyogo) struck the opener in the 18th minute against Gamba Osaka Youth (Osaka). Although ADACHI Tsubasa of Gamba levelled the match, Kobe untied the game in the first half and added another just before the final whistle to win 3-1, finishing in third place.

Kyoto Sanga F.C. U-18 (Kyoto), who were eager to move up, played against Ozu High School (Kumamoto). After 24 minutes, Kyoto’s SHIMAMURA Takuya struck the opener. Then both teams continued to fire shots. The game ended with a draw 3-3, sharing one point each.

Sanfrecce Hiroshima FC Youth (Hiroshima), who had clinched the title of the WEST last week, met Cerezo Osaka U-18 (Osaka) in second place at home. In the highly-contested match, ONOZAWA Toshiki struck a game-deciding goal for Cerezo in the 80th minute and led the team to victory.

Kobe Koryo Gakuen High School (Hyogo), who could avoid relegation if they won or drew the match, scored two in the first half in an away game against Oita Trinita U-18 (Oita). Although they conceded one in the second half, they managed to win the match 2-1, finishing in seventh place in their first year of the Premier League.